﻿ At the Gate | Art Space | John A. Barry And Bill Carmel | DanvilleSanRamon.com | 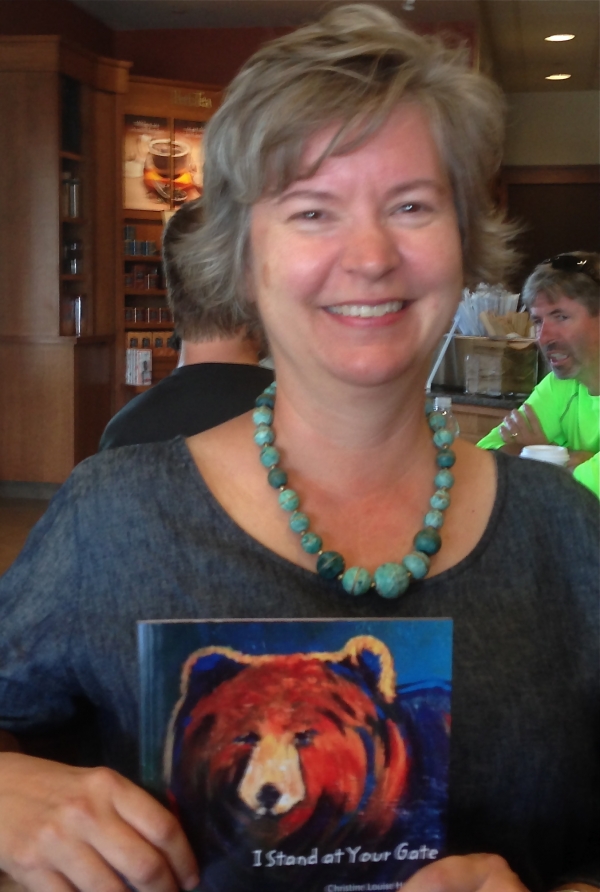 Dr. Christine Hartman's day job is at Livermore Labs, where she is deputy director of the Mission Opportunities Office. In that capacity, she helps engineers and scientists "win work with competitive proposals."

But Hartmann is also a self-taught artist, and some of her work are on display at Danville's Peace Lutheran Church until September 22. The exhibit features the original paintings from her book, I Stand At Your Gate. Of necessity, the 7 x 7 inch slim volume features only sections of the paintings. The exhibit, covering three walls of the sanctuary, is much more dramatic. One viewer described it as "like walking into the book."

Hartmann conceived and executed the book for victims of human trafficking, a subject to which she was introduced in a women's painting group. "One of them was helping the Red Window Project," an organization that?per its website (http://www.redwindow.org) ?"encourages survivors of trafficking and exploitation to dream big. "It got my mind going," explains Hartmann. "I'm going to write these girls a love letter."

She used some existing paintings and created some especially for the book. Its 16 images are accompanied by text, which she characterizes as "a love letter to all men, women, and children who have been bought or sold through human trafficking or exploitation."

Arm of Care uses the creative arts "to restore and empower those who have been exploited." Arm is an acronym standing for art, recreation, and movement therapies. Red Window estimates that 27 million people worldwide are victims of human trafficking. According to Hoffman, there is a documented report about an attempt to recruit a high-school girl in Antioch.

Through her art, Christine Hartmann?along with the organizations mentioned here?is working to put a dent in that huge number.

I Stand At Your Gate can be ordered from amazon.com: http://www.amazon.com/s/ref=nb_sb_noss?url=search-alias%3Dstripbooks&field-keywords=i+stand+at+your+gate

The future of homework
By Monith Ilavarasan | 0 comments | 962 views