In The Painted Word, published in 1975, Tom Wolfe wrote about the trend in art away from representationalism and toward reductionism and, ultimately, ephemeralism.

Forty years later, the art and graffiti on Carquinez Scenic Drive were reduced to pixelated pavement as the old asphalt was pulverized and used as the roadbed for a new paved trail.

The old stretch of road was potentially hazardous but funky and fun (you can see it here: https://www.youtube.com/watch?v=WtsHG5IZu70 and here: https://www.youtube.com/watch?v=JPhkyh5pys4). Plus it had an array of images ranging from celestial to surreal. Those images linger in the memories of the walkers, runners, and bikers who used to frequent the trail.

The new trail, although safer, is rather sterile and boring. I strolled a section of it a few weeks ago and lamented what used to be. I frequently rode the old road and was in the process of creating a giant trAction Painting on it when East Bay Regional Parks acquired the land, fenced off the road, and began the process of reductionism.

Another type of ephemeral art resulted from a demonstration of trAction Painting conducted by me and three associates recently at Stanley Middle School in Lafayette. On a 6 x 9?foot canvas with a fluorescent green and pink underpainting, we applied neon colors, employing skates, a scooter, and a bicycle as our "brushes." 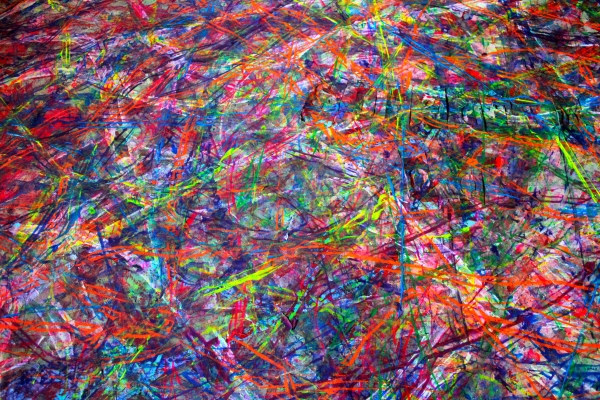 Before we started, some of the kids affixed stencils and taped symbols and shapes to the canvas. (A section of the painting is shown here, with letter stencils barely visible under the many layers of paint.) After I tweaked it in my studio, with some associate assistance, I donated it to the school, where the kids will remove the tape and stencils to see what resulted. I'll have a photo in a later blog installment.

After rolling across that canvas, I plan to roll along the new Carquinez trail at the official dedication on November 8, visualizing all the lost art.

The future of homework
By Monith Ilavarasan | 0 comments | 962 views