The Genghis Chron: a Tribute in Three Parts

Uploaded: Jan 7, 2015
The strapping young Border Collie at her front door made it clear to me: I would not pass. He'd only been resident with my former wife for a week (albeit long enough to have heard some of the Stories about this intruder -- I was there to pick-up our daughter). In that brief time, the dog had concluded that his job was to be guardian of the threshold. And he always does his job. 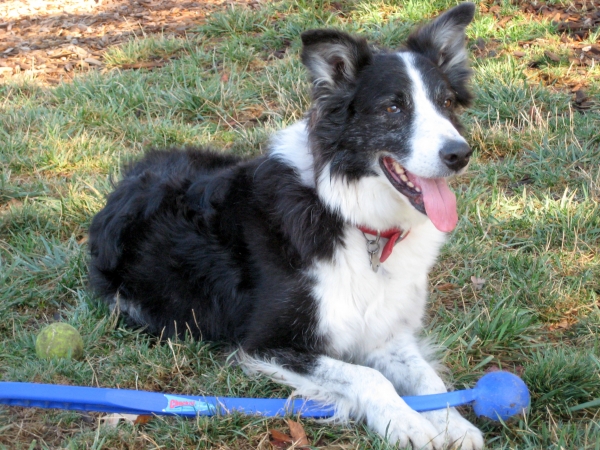 A week later, after this independent-minded shelter veteran accessed her yard by chewing through the wallboard around her back door, he came to live with our daughter and me. And after another two days, it was clear that he needed a conqueror's name. As he tore around the premises, snarling to show that he would repel that thunderstorm if only it would show its face, he became: 'Genghis' collie.

That was in the year 2000. In an interim that includes 144 fostered dogs and several well-respected cats, he has been my mind-melded companion; he's ruined me for other breeds.

There's an intensity to Border Collie-human relationships, born of their origins as working sheepdogs on the Scottish moors. It transcends any I've had with other marvelous dogs (and many humans). They observe and anticipate, and bind themselves tightly to their people. Outsiders are tolerated, often barely.

BCs are also mightily decisive: sometimes in error, but never in doubt. They have a restless intellect and a focused dedication to purpose that just loves a challenge, be it an unruly herd of sheep or the barrier of a closed back door. Foster dog 'Radar' once let himself out via the accordion closure on a second floor window fan, went over the wall and down to the creek for a swim ? then back over the wall while I was out looking for him. It was, after all, a sultry day ? where had I been?

Accordingly, Border Collies aren't for everyone ? they are a whole lot of dog. Too often, they overwhelm the circumstances present in households that think they want a 'smart dog,' but don't bargain for the vigor these creatures bring to their lives. Then it's off to the animal shelter's uncertain mercies, as it had been with Genghis.

I was surprised that Genghis was temperamentally unsuited to the Alpha pack position. That CEO honor was assumed by Chuchundra, timid with people, but who'd go around regularly and growl in the ears of the current pack members. In fact, he did little else ? the alpha doesn't have-to. The others always turned away in acquiescence, and still do. Genghis was more like the COO; he's always kept the trains running on-time. Herding, keeping order, instructing the young, always doing his job.

Back then, his first task was simple: just keep 'Nevada,' our ailing Catahoula hound from starving to death. Beset with kidney disease, she'd lost interest in food ? but she liked Genghis even less. Feeding them on opposite sides of a glass partition kept her fueled, if only to spite him. He bought her the last month of her life ? probably not her best month.

Nevada's passing was one of my daughter's first childhood tragedies. But Genghis was there to soften the blow. Providing that comfort became his next 'new work of dogs.' He did nip her once as she tried to force him into the tub -- BCs will do that when they're not certain who's in-charge. Her yowl, out of anguish more than injury, brought me running. Genghis slinked into the tub on his own.

We've run, camped, herded, and done agility and some fly-ball together. We often played tree slalom through Osage Park, with me on a bike and Genghis tethered via long retractable leash. His spatial awareness has been remarkable ? try as I might, I could not fool him into going the 'wrong' tangling way around any tree. In fact, he's generally been the better partner at all those activities. After a particularly frustrating agility run, the trainer took me aside. "Dog did fine," he admonished. "Handler needs work." 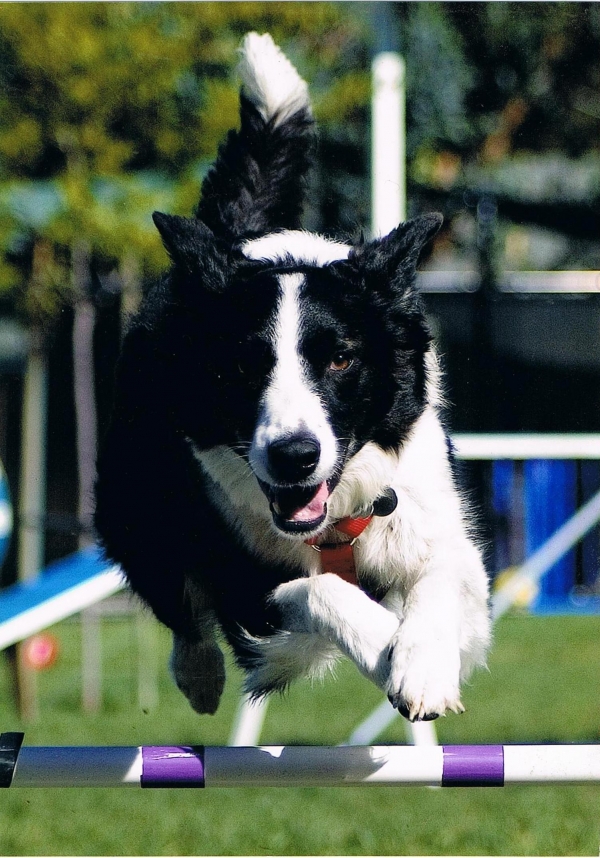 Still, there has always been a deep insecurity in Genghis that I've seen as well in other shelter dogs. It's as if, having seen the other side, he can't quite believe that this will last ? that he's really found his 'forever' home. Border Collies generally retain a just a spark of their own confident judgment and discretion, anyway. You work 'with' them, more than you impose training 'on' them. Still, this is a reservation that goes beyond the breed effect; it forever asks: can I really trust you?

It came out when he first learned to swim at Dorris Lake, a remote, hot springs-fed idyll deep in the Sierra. He'd worked his way to a point on the rocks where I either needed to throw him in, or lift him out of his perch. I dropped him down into the water and jumped in after him, but the look of bewildered betrayal in those deep collie-eyes cut me deeply. He'll still swim out after a ball, but he prefers to dash along the shore, biting the sparkles on the wavelets. 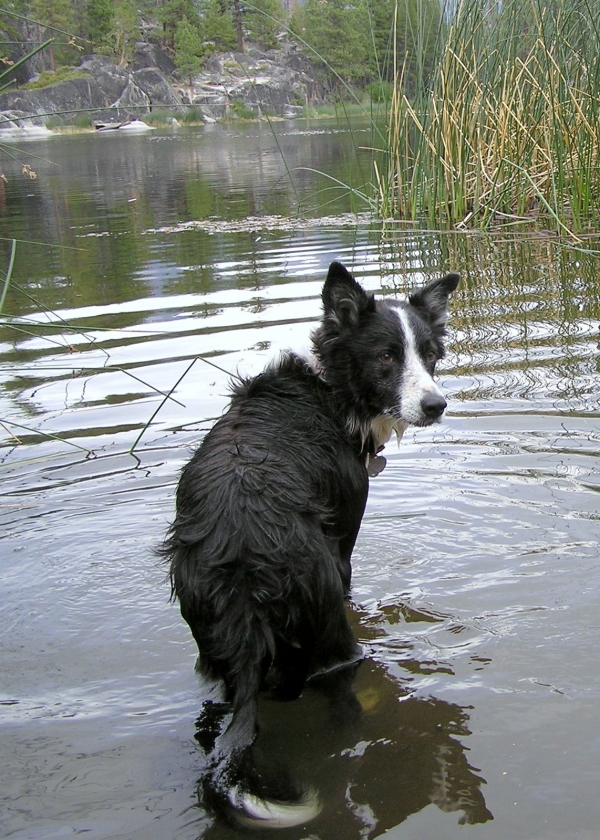 I saw it again when we first worked sheep in a corral. The trainer roped his collar with a long lead, and ordered me out of eyesight so he'd concentrate with her. He lay down, heartsick, and wouldn't budge until I returned, so they could work around me. Then it was like flipping on a genetic switch ? centuries of inbred instinct found expression, and he persistently worked his will on those ruminants. Still, not without me with him.

And now, here we are: he's fifteen, a distinguished grey around the muzzle, those profound brown eyes a touch cloudy, significantly lame in the hindquarters, as both legs have had ACLs repaired ('world's most expensive free dog' is his sub-title). We were headed to the beach, and he labored mightily as he approached the truck ramp with the other three dogs in our family pack.

He couldn't put any weight on that right rear, and better leg. Once in, he wouldn't budge until he was sure I understood his situation. We eventually negotiated his gentle exit from the truck bed, and I spent much of the weekend on the floor with him -- comforting, gauging his temperament, just hanging-out and working with a sling left over from his surgeries when he needed to go out.

I knew he needed me to do a job for him, to help him in reciprocation for his lifelong dedication.

What to do, and how to do it though, required expert advice.

Herman Glates is a registered user.


What the heck kind of article is this??

It?s a new year. I report for duty, ready to humiliate Tom?s ridiculous liberal views and he gives us this fluff?

Even worse, he says this is the first installment in a THREE part series!

I suppose it could be worse. By now, I would?ve expected a guy like Tom to devote several articles fawning over the White House dog, Bo Obama.


Aw, Glates, there will be time enough for me to resume providing distractions for The Soulless. Besides, I'm getting fan mail from tis one.

In the meantime, I'm sure that both Roz and Gina would love to hear from you, and Tim has two complaints up about the Governor -- right up your alley.

Report Objectionable Content
Posted by Cholo, a resident of another community,
on Jan 8, 2015 at 3:31 pm


I'm the kinda person that loves to read everything about dogs! yup...my boys get nothing but the best...wonderfully prepared meals and lots of chit-chat from this one!

I have a question: I recently noted somebody extending a microphone into a nativity scene and I found it rather strange? Why would anybody stick in mike into the face of a bunch of statues and ask if they have any messages for folks back home? very strange indeed? duh... Web Link


I have a feeling that this homage will not turn out well for the dog. I will avoid part III. I don't want to read HG's reply to that one either.

Report Objectionable Content
Posted by Rhel, a resident of Pleasanton Meadows,
on Jan 8, 2015 at 8:26 pm
Rhel is a registered user.


Cholo, I think that's a "censer," which is commonly used by "High" Christian clergy (Episcopal or Catholic) (as opposed to "Low" Christian, of which Baptist is a prime example). The censer is used for sprinkling holy water or incense.

I'm not positive, though.

Report Objectionable Content
Posted by Bob P, a resident of another community,
on Jan 8, 2015 at 9:06 pm
Bob P is a registered user.


Why doesn't it surprise me that Glates is from Danville.

Report Objectionable Content
Posted by Tom Cushing, a resident of Alamo,
on Jan 9, 2015 at 5:57 am

Report Objectionable Content
Posted by American, a resident of Danville,
on Jan 9, 2015 at 7:14 am


Often, the hardest things to do in life are also the right things. Putting a loving, loyal, dog friend down to sleep because it is time is one of those things. Knowing your four legged buddy is running thru the fields in heaven where there is an endless supply of bones and other dog buddies(but hopefully no squirrels)helps with the sorrow. Anyone who questions whether there is a God has never had a dog, as only a God could create such a wonderful companion.

Report Objectionable Content
Posted by Cholo, a resident of Livermore,
on Jan 9, 2015 at 8:40 am


FYI: Pope Francis recently clarified that dogs DO NOT GO TO HEAVEN.

i rest my case

Report Objectionable Content
Posted by Cholo, a resident of Livermore,
on Jan 9, 2015 at 11:58 am


What I don't understand is how anybody on earth/human being knows who can go to heaven and who can't? I find that very strange?

I believe that if you do good deeds while you're alive, it makes lots of sense.

I appreciate Rhel's comment but it looks like a microphone to me and the guy is aiming it at the statues? I don't understand why anybody could possibly expect a statue to offer a comment...strange-ola!

maybe I have the flu or something...I have been coughing alot today...

Report Objectionable Content
Posted by Roz Rogoff, a resident of San Ramon,
on Jan 9, 2015 at 5:29 pm

I Rhel is correct. The tool the priest is holding is not a microphone. It is for sprinkling holy water, but it is called an aspergillum not a censer. A censer is for burning incense.

I'm not that religious or smart to know the difference. I used Google.

Report Objectionable Content
Posted by Cholo, a resident of Hacienda Gardens,
on Jan 9, 2015 at 5:40 pm


Thanks Roz! I'm compelled to ask if you meant to spell the word so it almost seems that you talking about Asper-Gum. They were small pastel tablets that provided some relief for folks who chewed them.

They were not before my time. yum yum plenty!


Report Objectionable Content
Posted by Cholo, a resident of Livermore,
on Jan 9, 2015 at 5:46 pm


I see...not to be confused with kind of aspergillum...Web Link

Report Objectionable Content
Posted by Cholo, a resident of Livermore,
on Jan 10, 2015 at 1:38 pm

Is Venus Williams happy or what? HAPPY!


To the 'flagger' of comments -- would you kindly email me (address up top ^) with the basis/es for your concerns?

How Much Time do You Spend Outdoors?
By Chandrama Anderson | 0 comments | 2,173 views