Graffiti: the word conjures images of urban blight, tagging, spray paint, non-color-matched swaths of painted patchwork rolled on to cover up the offending tags. But partway up the Remington Loop Trail in Las Trampas, two large sans serif uppercase white letters stand out against carefully graded ochre gravel on the side of a hill. Constructed of nailed-down fabric, the letters withstood 50 mph gusts ripping through Las Trampas on February 6. This work of agrarian graffiti appears to have been completed recently. 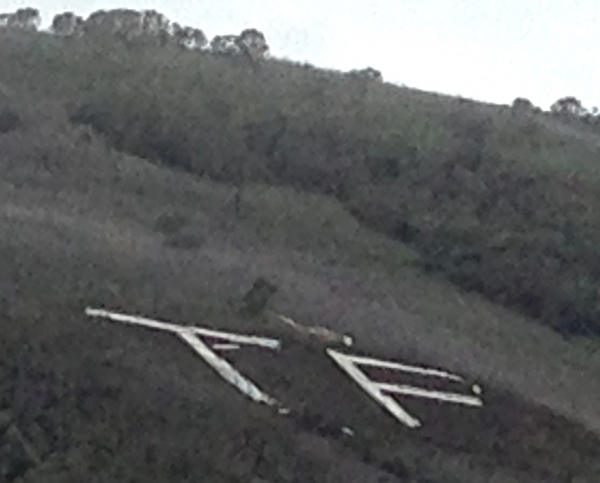 The two letters are TF and apparently don't stand for "tutti frutti," "too far," or "Town fatheads"?uh, "fathers." Speculation is that the letter pair was constructed by high school students and represents, as the Urban Dictionary puts it: urbandictionary.com/define.php?term=tf

Regardless of the letters' meaning, their creators employed skill and dexterity to affix them to the hill. They had to schlep in the materials, grade the hillside, line off the letters, and nail them down?all without getting caught.

On a very small scale, this work is reminiscent of that of Christo, who wrapped the Reichstag in fabric and created Running Fence in Marin County. Christo had permission for his massive projects. One assumes that the TFers did not and completed their work on the sly?like any good graffiti artist.

I'm guessing these letters won't last long?done in either by the elements or authorities of some agency.

As to this blog entry: that's finished.

So, I follow the link, and, TF?!?, it's a t-shirt shop idolizing Mark Cuban? There IS an urban dictionary entry; apparently the 'W' is now silent.

I share your admiration for the youthful inspiration, energy, planning, execution and pranksterism of these temporary monuments. You can still see a few remnants of a smiley face on the hill overlooking 680 on the east side of the freeway, for example.

I do wonder why the horse on the feed store roof in Alamo doesn't get more attention, in terms of school colors on part-or-all of him. And that sad, vacant billboard frame along the freeway that's used briefly for election propaganda just begs for a clever renovation... Where are all the junior Banksies?


Like all other contemporary waterway valley civilisations of the Bronze Age, the Indus or Harappan Civilisation depended on horticultural excess. The yearly flooding in the Indus and the streams of the Punjab cut down rich residue, making inundated land extremely prolific. There more likely than not existed a regulatory apparatus to gather the grain as expenses because of the State or as offerings to the sanctuaries. The grain would have been put away in huge storage facilities for circulation as wages, particularly to the armed force of laborers utilized in the development of huge open works, for example, the block stage at Mohenjodaro, the fortresses at Harappa, city seepage frameworks, water system waterways, et cetera.

Comfort, communication -- and the lack of both
By Gina Channell Wilcox | 17 comments | 1,562 views