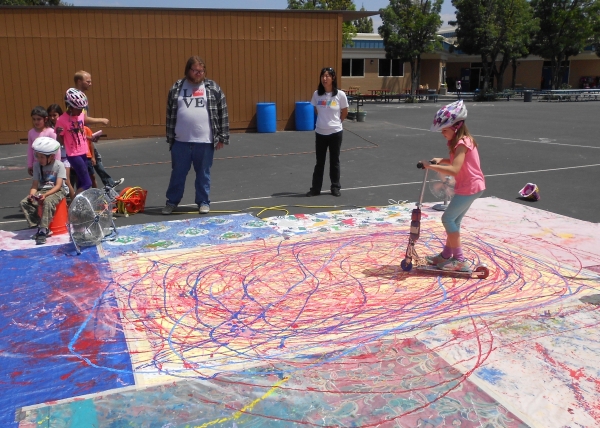 How do you get 40 second, fourth, and fifth graders to create a 7 x 11 foot painting in less than two hours, using Razor scooters as their "brushes"? That was the challenge facing my associate Bill Carmel, me, and four assistants at Discovery Charter School in San Jose on May 20.

The answer is: It takes a village?and more than a little spillage. First, there were the kids themselves. They were "jazzed" about the project, to quote one of their teachers. Once they got the hang of transforming these ubiquitous modes of transit into trAction Painting instruments, they laid down red, pink, and dark- and light-blue tracks on a yellow-gessoed canvas, with sand added to the primer to minimize slippage (the combination of tiny plastic scooter wheels and acrylic paint can be slipperier than a politician.)

Their teachers, Mike Wright and JeanAnn Tulloch, had prepped them for the event by discussing aspects of art, particularly as it relates to motion. When it comes to painting, not much can be more kinetic that zooming and skidding across a large canvas. Some kids went beyond simply making tracks and performed jumps, which occasionally caused paint to jump from its container on the scooter onto the canvas, resulting in rosy/cerulean Rorschachs that complemented wheel-wrought lines. JeanAnn had some of the kids who weren't Razoring paint with toy cars on small canvases while they waited their turn to take turns on the capacious canvas.

Joining the teachers in the pedagogical aspects of the event was Bill, who engaged some of the assembled kids with thought-provoking questions about the nature and basics of art. Barbara Johnson helped me load paint as the kids worked in tag-team fashion. Vicki Oliver, a former teacher, kept the action moving by whistling "start" and "stop" for each participant. Because we were so short on time, each kid had about 20 seconds to paint?then on to the next. At the midpoint of the project, we stopped and got electric fans spinning, to dry the work in progress as much as possible in preparation for the next round. The first round had been red paint, followed by introduction of white and the eventual transition to pink. Chris Diggins spotted for the kids and helped with paint pouring. Eva Langfeldt shot stills and video.

After a few minutes of proverbial watching paint dry, the kids attacked the canvas with several hues of blue. The nearly final result of their efforts can be seen in the accompanying photo.

Also there to lend a hand were several parents volunteers. One in particular was especially helpful, bringing extension cords to the site, enabling us to run the much needed fans on a coolish, partly cloudy day.

Working together, we pulled it off. Congratulations and appreciation to all involved, and thanks to Discovery School for giving us the opportunity to demonstrate once again our goal of incorporating trAction Painting into school curricula.

Incredible project, great fun and when do we get to do it again?

Report Objectionable Content
Posted by Stark, a resident of another community,
on May 25, 2015 at 4:02 am


I was reading this article about trAction Painting and was thinking that this is a great idea about how to involve those kids who are not "jazzed" about painting. Using these types of tools they can get really interested in creating art and bring out their inner artist.

Report Objectionable Content
Posted by John A. Barry, a DanvilleSanRamon.com blogger,
on Apr 5, 2016 at 8:40 am
John A. Barry is a registered user.

Report Objectionable Content
Posted by SteveErvin, a resident of another community,
on Apr 29, 2016 at 1:27 am


I was understanding this article about trAction Painting and was imagining this is an incredible thought regarding how to include those children who are not "energized" about painting. Utilizing these sorts of instruments they can get truly keen on making workmanship and draw out their inward craftsman.

Report Objectionable Content
Posted by John A. Barry, a DanvilleSanRamon.com blogger,
on Apr 29, 2016 at 1:05 pm
John A. Barry is a registered user.

Report Objectionable Content
Posted by chaitukits, a resident of another community,
on Nov 4, 2016 at 2:40 am


Thanks for sharing your info. I truly appreciate your efforts and I am waiting for your next post thank you once again.

Report Objectionable Content
Posted by WillaimHai, a resident of another community,
on Nov 4, 2016 at 11:06 pm


Road Smarts "Be Reel" Middle School Video Contest.. Provided that this is true, the eleventh Annual Street Smarts "Be Reel!" Video Contest is for them! For the challenge, understudies make 60-second open administration declaration recordings on a movement security subject.


I really enjoyed your post,its enjoyable and entertaining.

Report Objectionable Content
Posted by jatin, a resident of San Ramon Valley High School,
on Dec 28, 2016 at 6:18 am

Report Objectionable Content
Posted by tutuapp, a resident of John Baldwin Elementary School,
on Jan 24, 2017 at 2:01 am


This is great information you have share here. I will be looking forward to reaching out to see what We can do to help the world as you do

Report Objectionable Content
Posted by fly gps, a resident of Los Cerros Middle School,
on Mar 1, 2017 at 7:03 am

Report Objectionable Content
Posted by John A. Barry, a DanvilleSanRamon.com blogger,
on Jun 22, 2017 at 2:34 pm
John A. Barry is a registered user.

Doing more with the natural spaces we have
By Sherry Listgarten | 6 comments | 2,433 views