Uploaded: Oct 13, 2015
Over the past year, I've reported in this blog on efforts by my colleagues and me to bring trAction Painting to kids—and adults. In all of these efforts, our focus has been on guiding participants in the technical and aesthetic aspects of painting on large canvases with scooters, skates, bikes . . . wheeled vehicles and objects of all kinds. But until the weekend of October 10 - 11, we'd never had an opportunity to indulge in the process together for ourselves.

Artist Bill Carmel and I work with a cadre of colleagues without whose assistance and encouragement we'd never have been able to realize these events. Barbara Johnson and Lisa Nicolini, who have been with us since our first project—a summer camp in July 2014—joined us last weekend to lay down paint on a 5.5 x 11-foot canvas. Bill, Lisa, and I have occasionally demoed the process during the five events we've hosted, but for Barbara, it was the first time getting "behind the wheel." Or wheels, in this case. She applied yellow paint with two rototiller wheels on an axle affixed to a long pole, later joined by Bill, employing lawnmower wheels attached to a pole—an innovation we developed for our only event with adults, last August. 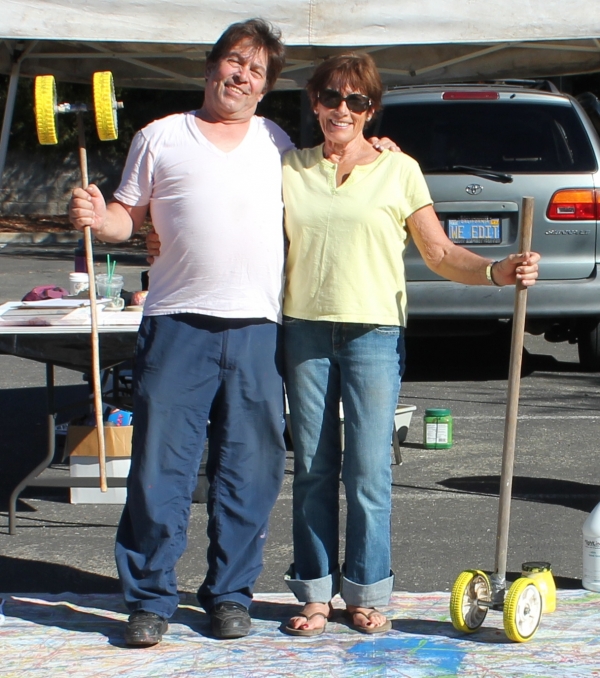 Another new method, employed for the first time, melded skates and bike—at least part of one. Until the weekend, I had five bikes in my trAction fleet: three old adult mountain bikes—one of which I found rusty and abandoned on a hiking trail—and two kids' bikes—one of which I found in disrepair and abandoned near the Iron Horse Trail. Bill and I sawed the front fork and handlebars off the found adult bike and affixed a paint dispenser just above the wheel. By holding the bars and pushing and pulling the wheel while skating, we attained a fat pattern with the knobby bike tire and thinner tracks with the skates.

We used the exercise, which lasted four hours, as more than a painting party but also as what we view as another potential trAction Painting process. To date, we've worked with kids to incorporate elements other than art into these projects—viscosity and geometry, for example. The dynamic was somewhat different in the one adult event. But one objective was the same—namely to enjoy creating an artwork of which we could all be proud.

Although our weekend group was small, the event and process ended up being a team-building exercise, strengthening—among other things—our joint appreciation of the creative process. With no kids to monitor, we had the leisure time to think about new and refined methods of paint application—such as the wheels on a stick. We also gave more thought to what must have been paramount in Jackson Pollock's mind as he splattered layer after layer on canvas: deciding on the order in which the hues are applied.

Or maybe not. In the 2015 sci-fi film "Ex Machina," an evil genius involved in AI research sits with an employee of his corporation in front of a large "Jackson Pollock" painting. The owner launches into a disquisition about whether Pollock could have created his oeuvre if he had thought in advance about what he would do. The owner referred to Pollock's technique as "automatic painting," a method developed by the Surrealists to unleash the subconscious. More than once, I have been asked if my trAction paintings are random or planned. The answer is: both. Our group had an informal roundtable on the subject. Then from speculation about falling on one's behind while skating, we evolved into a discussion of healthcare in the US, as one of us is in the process of attempting to navigate the medical maze.

We came away from the event with a better mutual understanding of what we do in these events and how to do it better. Further, we saw the potential of trAction Painting in corporate team-building, whereby we envision, say, a marketing group bonding by working together to solve the problem of how to create a large painting based on an exploration of the equipment and how to most effectively apply it.

But that's next year's project. For the weekend in question, we had an incomplete painting at the end of the first day. Barbara and Lisa were not available the next day, so Bill and I returned to our trAction roots. We gave three preadolescent boys an opportunity to test not only their painting skills but their logistical prowess as well. A 5.5 x 11 canvas looks rather small when three artists—two on scooters and one on a foot-propelled Thomas the Tank Engine trike—are painting concurrently. Each wielding a different color, they had to not only aim their vehicles to areas that would benefit compositionally and try to work with and against existing lines and those being created in real time (requiring them to activate both sides of their brains) but they also had to avoid crashing into each other.

Especially as neophytes to the genre, they did a great job! When they were finished, Bill and I let the paint dry briefly in the afternoon sun. Bill then used a rolling device I'd crafted from a lawn-edging tool (having a ribbed wheel that makes an intriguing paint pattern) to camouflage a few large blotchy footprints. The initial mountain-bike tracks had largely disappeared under subsequent paint layers, and we were deficient in green. So I polished off the canvas with a small amount of green applied with the knobby tires of a BMX bike.

You can see the result here. The painting will eventually be on display at Peace Lutheran Church, in Danville, which generously provided parking lot space. Two brothers in the scooter-trike trio are members of a parishioner family.

My thanks to all the participants. The experience was rewarding well beyond the painting's creation. Knowledge gained from these events is accretive, and we plan to apply insights gained over this weeked to future endeavors.

I'm teaching my Arts100 class again, and I love that you keep posting things I can tell my students about. It's so exciting for me to see all of the great innovation happening right in front of my eyes. Here's what I just posted for my students.

I wrote about John Barry's innovation of TrAction painting in one of my comments here with a link to a blog I wrote about Mr. Barry's work and another local artist Bill Carmel. Well John Barry just posted another blog about Teamwork in art. Here's a link to his latest blog with a photo of Bill Carmel and Lisa Nicolini holding a wheeled painting tool they created for TrAction painting. Web Link This is a collaborative art form. No starving artist in a garret, but lots of fun on a driveway."


Oops I guess the photo is of Barbara Johnson, not Lisa. I should have read your whole blog first.

Report Objectionable Content
Posted by kate john, a resident of Danville,
on Feb 16, 2016 at 9:04 am


It's so exciting for me to see all of the great innovation happening right in front of my eyes.

Report Objectionable Content
Posted by rembo, a resident of Blackhawk,
on Aug 19, 2016 at 4:27 am


I really enjoyed reading your article. I found this as an informative and interesting post, so i think it is very useful and knowledgeable. I would like to thank you for the effort you have made in writing this article.

Doing more with the natural spaces we have
By Sherry Listgarten | 3 comments | 1,763 views