﻿ The Most Interesting Dog … in the World | Raucous Caucus | Tom Cushing | DanvilleSanRamon.com |

The Most Interesting Dog … in the World

Item: Dos Equis beer is retiring its “most interesting man in the world” commercials. They’ve even blasted him off toward Mars, to a canine accompaniment.

Separately, as I tentatively sidle toward the inevitable ‘second childhood and mere oblivion,’* I think I’d prefer to see my obituary beFORE my demise, because nice things are often said in them. I’d hate to go to my reward with commentary limited to the impressions thoughtfully rendered by readers in these Comments sections.

Blending those themes and knowing what I do about my flat-coat retriever Tuxedo, let me tell you about him. You see, he’s very much alive, but last week we had to take a back-leg infested with bone cancer. He remains the most interesting dog in the world.

Now, I know that Everybody’s dog, like their child, is beautiful, snowflakely and above average. But please indulge me for the moment: after all, I have had about 150 canines through the house as fosters – indeed that’s how I first met Tuxie. I’ve had the privilege and opportunity to observe thousands of other canines, as well. He’s unique in my experience, and I want him to see all the nice things I write about him.

I met Tuxie – then ‘Astro’ – as a stray at the Oakland shelter. They’d called to say they had a border collie there, would I pull him? The dog they’d miss-identified was actually a chow, right down to the purple tongue.** But there was Tuxedo in a wire kennel, watching my every move and beckoning with his eyes as dogs will do. I ended-up taking him, instead – at least he’s back-and-white. 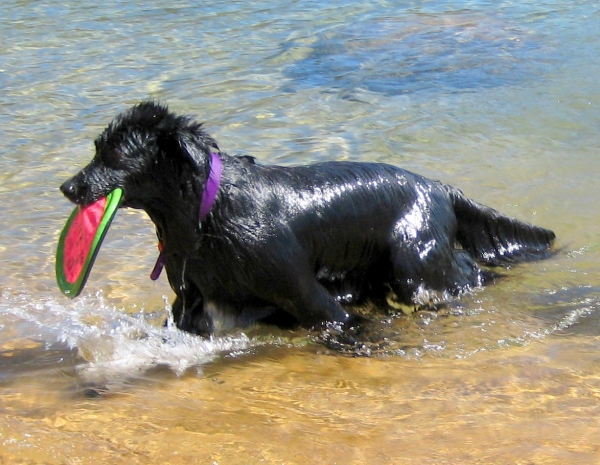 And pretty handsome. It wasn’t long before he was adopted-out to a blended family in Pleasanton – seven stair-step kids in all. The eldest few loved him, renamed him Elvis and had a wonderful time with him. But Tuxie has never been particularly impressed with the species barrier. He jumped the family hierarchy and inserted himself as kid 4. That might’ve been manageable had he not dominated 5, 6, 7 and 8 – enforcing his preference that they stay in their bedrooms. After a few days of that, Mama brought him back.

Thus, he settled into our permanent pack of four: with Genghis collie (written-about here previously), Chuchundra*** and Puppy-Anne. This pack always had Chuchie as the alpha, Genghis to keep the trains running on-time, then Tuxie and Puppy, who would sometimes snarl and strafe the others impotently, to little effect. Tux was never really satisfied with that chain of influence, and he pushed-on Genghis routinely. But BCs are nothing if not resolute, and a pissed-off border collie is an impressive persona (just ask any cow or sheep). So they settled into a permanent routine of grumbling at each other.

So, how is he so interesting? First, he has his own mind. If you’re looking for blind obedience, he’s not your cuppa-canine. He would not run through that wall for you, unless he understood why – and agreed. Ultimately, Tuxedo wants to please himself. But there’s often a great deal of overlap in his venn diagram and mine, plus he’s predictable if you can get into his mindset. That’s fascinating, and there’s a lot going on behind those eyes.

Next, he solves problems better than any dog I’ve seen – he approaches them with crow-like intelligence, which is high praise. Some dogs can push open a door from inside, if it’s facing out. But after coming home to all my dogs entertaining themselves in the front, with the inward-opening door ajar, I had to either admit to early-onset oldtimer’s disease, or figure out how he did it. Turned-out that the inside lever handle integrated with the deadbolt, such that if he bounced off the handle a few times it would open both, and the door would rebound-in. Around with one paw, and out! New hardware was ordered.

Or, take the Hap Magee dogpark fence. When a Frisbee cleared it, the other dogs would just signal regret, and leave. Tuxie climbed over the barrier, got the Frisbee, and because he couldn’t climb back over with it, pondered a moment. Then he trotted off to the entrance gate, where somebody’d surely let him in -- and if not, it's just a kind of a door.

Then there’s the Frisbee skillz themselves. Many dogs are pretty good at it, but they’re usually limited to throws from righties or southpaws, as they tend to break differently. With Tux it doesn’t matter – he knows the break and cuts across it to catch – either-handedly, and with abandon. 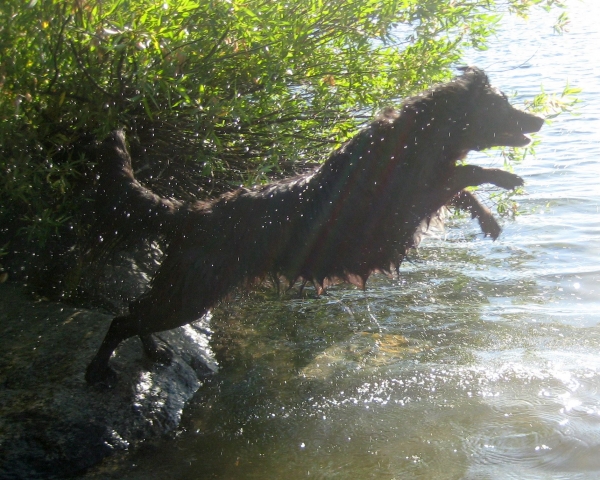 We also developed a game of soccer goalie. He gets a point for a stop, I’d get one for going around or over-top. They are spirited contests – he once played a little-eager at the park to a game of 21. Kid’s father was not pleased when I told him you had to win by two. And Tuxie did.

That sense of fun and enthusiasm carry over. Sue plays games with the dogs, like hiding treats around the room. Tux usually wins – he may have a better nose, but he also more clearly understands the object of the games. In another life, he’d be a terrific search-and-rescue dog, but here, he's consigned to goofy new year's pics on the San Diego dog beach, 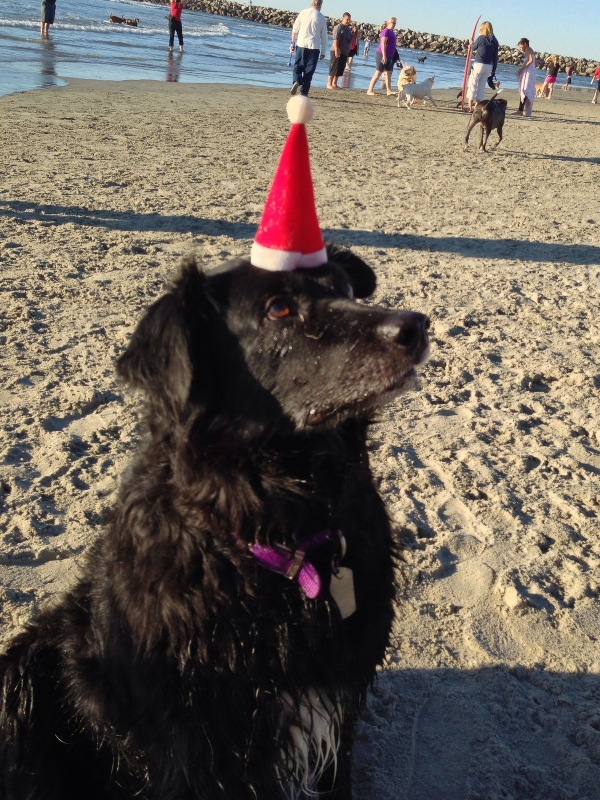 An animal or human with a spirit like that ought to get to choose many things. So it was that when he broke that tibia, we wanted to watch and see how he responded in a temporary splint. Dogs in general react better than we do to this kind of set-back, but then he’s never actually considered himself to be a dog. I’m mindful as well of the canine narrator in the wonderful novel “The Art of Racing in the Rain,” who was pleased when his human finally figured-out that he was tired of living. After all, dogs may have little concept of anything that lies beyond this life, and have much less reason than we do to fear it.

Tuxedo promptly disabused us of any notion that he’s done living – he barely lost a step and was very much himself. So the surgery was expertly performed a week ago. Some discomfort, long nights and a few anxious moments have ensued, but there’s a difference between suffering for no reason (or only for us), and suffering to get better. He’s pretty clearly on the latter path, with some preventive treatments ahead. So, things may be looking up for Tuxedo. 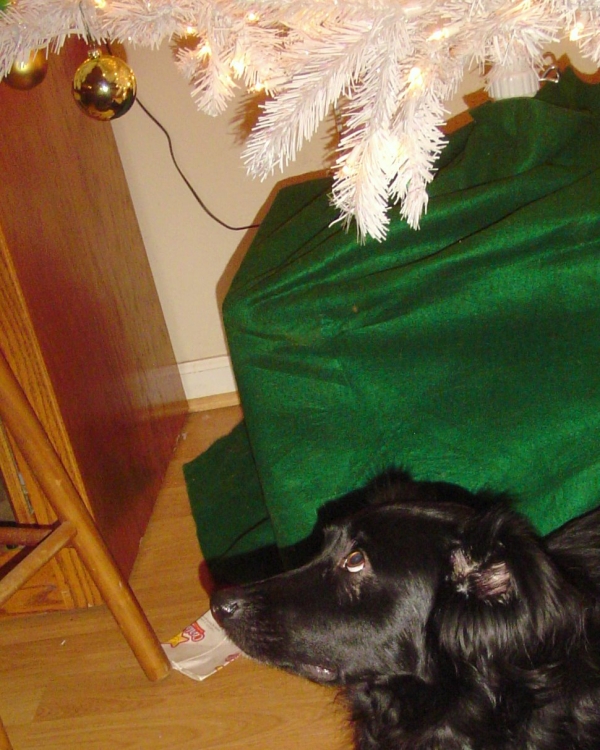 I’ve had a few dogs I’ve loved more deeply, but none so fascinating to be around.

** Shelters sometimes take liberties with breed and age – their ‘flexible guesses’ are for a good, life-saving cause. But we could not be credible on the Border Collie rescue website with a chow, I regret to say. Sorry, fella!

*** Another ten-point literary reference. It fits his personality, at least around homo-saps.

Doug Miller is a registered user.


My dog has the same frisbee.


Thank You for providing a loving home for dogs! HOORAY! IT'S A BIG MITZVAH!

Report Objectionable Content
+   3 people like this
Posted by Roz Rogoff, a resident of San Ramon,
on Apr 15, 2016 at 1:00 pm
Roz Rogoff is a registered user.


My mother's Uncle Louis Hirsch and his wife Margie owned two chow dogs in the 1920's for protection. He was managing a light weight boxer, Jack Bernstein, Web Link Louis and Marge would tell me stories about how the dogs protected them from the gangsters in the '20's who would try to force them to get Bernstein to throw fights. Marge and Louis were a great couple. They never had children so the dogs were like their children. Chows are very smart and very loyal. Roz

Report Objectionable Content
+   1 person likes this
Posted by Roz Rogoff, a resident of San Ramon,
on Apr 15, 2016 at 1:02 pm
Roz Rogoff is a registered user.


My mother's Uncle Louis Hirsch and his wife Margie owned two chow dogs in the 1920's for protection. He was managing a light weight boxer, Jack Bernstein, Web Link Louis and Marge would tell me stories about how the dogs protected them from the gangsters in the '20's who would try to force them to get Bernstein to throw fights. Marge and Louis were a great couple. They never had children so the dogs were like their children. Chows are very smart and very loyal. Roz


Wow, thanks Doug -- that's good obit material for me (or you could change your politics, too, you know). Roz -- thanks for the story. I have nothing at all against chows -- wish we could take 'em all, and I understand they're pretty tough customers. Cholo -- fun vid-- thanks! Dogs: the great uniters! Even the self-departed American might agree.


Who did it? Web Link

Report Objectionable Content
+   12 people like this
Posted by macktheknifefromdanville, a resident of Danville,
on Apr 22, 2016 at 10:24 pm


He publishes a story about how he saved a dog after his gadfly behavior; self serving confirmation. Did it make you feel better about yourself? Enter snide comment from the gadfly of Danville.... censor this, because god forbid someone be critical of your tone and motives.


Whoa sharkie, posting at midnight? Is that when the bars close in Danville? Louie -- good one -- regards to Sukey, and especially Miss Lotte Lenya.


Tom...Chrome by Google may be one way to have better control over what comes in/out of your computer. Web Link

Princess Diana: "There were three of us in this marriage, so it was a bit crowded."
By Chandrama Anderson | 0 comments | 2,891 views