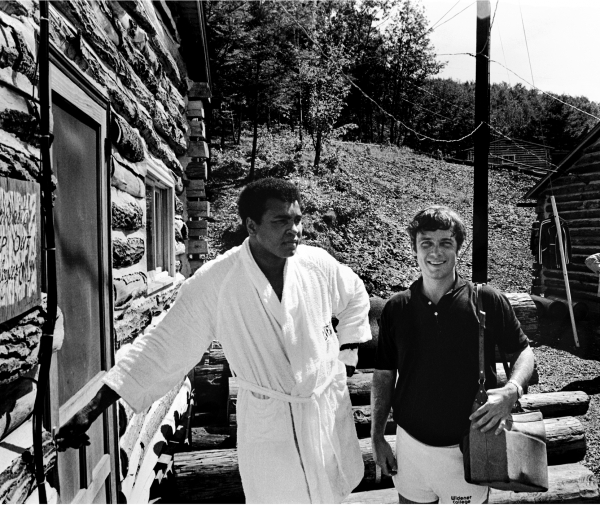 The death last week of the legendary Muhammad Ali had a strong local angle for me.
No, it wasn’t the former newspaper colleagues who had met him and covered him—it was my neighbor on Foothill Road, Tom Coleman, who lives a few doors down. We have worked together to try to curb both the speeds and the amount of traffic in the afternoons on Foothill. He is a retired organizational development consultant, last working at Lawrence Livermore National Laboratory, and an avid amateur photographer for decades.
Turns out, through an email that Tom sent me, that he had two encounters with the champ. The first was at his training camp in Deer Park, PA in 1977. Tom went to the camp to photograph Ali and his baby daughter Hana. While there, he met Ali’s life-long friend Jimmy Ellis, his brother Rahman and his corner guy Chuck Bodek. They ate breakfast together and Tom saw the afternoon sparring session.
Years later, the second meeting came when Tom was teaching at the University of Chicago. As he wrote,”… a student mentioned he was in the restaurant next door. When I approached him I said 'you don’t remember me'… Before I got the chance to say where I met him, he blurted out, “I remember you, you photographed Hana and I!” I was so flattered. I mean it had been 21 years since our first meeting. Here was, at the time, the world’s most famous man and he remembers me. He invited me to join his small group for lunch. At the table was a body guard and Elijah Muhammad’s son. Elijah Muhammad led the Nation of Islam and had some very radical views about the races.


After hearing Ali’s several rounds of knock-knock jokes, Elijah’s son and I sparred about the black condition in Chicago. He, predictably, gave me his speech about how they were getting screwed six ways from Sunday and that they were victims. I strongly disagreed. I was teaching a course, as it turns out, on “Reaching Your Potential” so I was loaded for bear. What was interesting was that the whole time we were having a mini-debate about the issue, Ali’s was watching me intently and smiling. Maybe it was refreshing to see a white man stand up to the dogma of victimization that has had a stranglehold on black progress for decades.”

He concluded, “’ll always admire his approachability and his boy-like humor. There are some things I didn’t like about him, but as a human being, he was top-notch.”

A couple of memories from the sports writers mentioned the same qualities—sense of humor and his amazing memory for people.
Dublin and the valley lost one of the truly nice people last week when Earl Anthony’s Dublin Bowl owner Ted Hoffman passed on after being in declining health.
I knew Ted throughout my newspaper career, both from a sports angle dealing with the bowl and from a community standpoint through the Dublin Chamber of Commerce, the Dublin Rotary and the Dublin Partners in Education. Ted had a real heart for the community and took the time to be actively involved as well as giving away probably thousands of bowling games over the years.
What characterized Ted was his big smile—you knew he was genuinely happy to see you.
I knew, from a sports standpoint, that Ted was a big supporter of professional bowling, but until I read his obituary I had not realized who involved he was in leadership and how respected he was within the industry.
His family and his friends have lost a quality man.

Roz Rogoff is a registered user.


Very sad that Ali had Parkinson's disease. He was such a strong, witty guy in his prime, but his health declined so much in old age. RIP Muhammad-Ali, you made the Word a better and more interesting place.


Tim, another obvious local connection to Muhammad Ali is Pleasanton's connection to George Foreman. After beating Joe Frazier for the title, George trained at the Fairgrounds for all of his title defenses, including his fight with Ali, aka The Rumble in the Jungle. Ali may have had Deer Lake, but Big George had the Mineral & Gems Building!

Tens of thousands of American women/men died protecting the rights of fellow Americans.

The HERO'S are those Americans who bravely served their country.

I'm not the least bit happy that he suffered from a disease. Millions of American's suffer from debilitating diseases. It's important that as a country we continue to fund the scientific research that will hopefully end such suffering.

Some of the best jobs around
By Sherry Listgarten | 5 comments | 3,521 views

People and Relationships Never Stop Being a Work in Progress
By Chandrama Anderson | 3 comments | 1,989 views

Wine about it
By Monith Ilavarasan | 0 comments | 540 views

What Is a Good College?
By Elizabeth LaScala | 0 comments | 405 views