Uploaded: Feb 13, 2017
Berlin wrote “Puttin’ on the Ritz” in 1927. The song first appeared in the 1930 film Puttin’ on the Ritz (1930). This version features poor but fashionably attired blacks parading on Lenox Ave. in Harlem. Berlin rewrote the lyrics for Blue Skies (1946) to feature affluent whites promenading on Park Ave.

I’ve written four take-offs on the latter version under the title “Putin’ on a Blitz,” respectively about the murderous dictator’s rape of Georgia and Ukraine and about his support for war criminal Bashar al-Assad.

Recently I ran across an old pull-down map of Europe a friend gave me years ago. I had always planned to do something with it but didn’t know what. Then it struck me: a visual representation of Putin’s aim to reconstitute the old Union. With white, blue, and red, the hues of the Russian tricolor, I modified the map by using trAction Painting techniques and brushes. I painted the lines radiating from Moscow with inline skates. With brushes, I inserted the tricolor question marks in Western European countries. 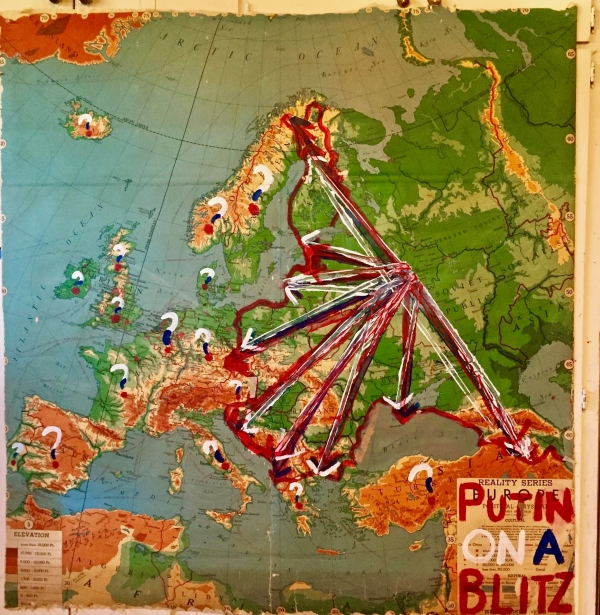 I appreciate the painted map. However, introducing words like "putain" to some readers can spell nothing but more ugly.

Words like "putain" "puto" "puta" "ho" etc...women are frequently on the receiving end of harmful language. The language used to describe women is quite often horrific and makes it easier to physically and emotionally harm women and girls.

Please be respectful of women and girls. It makes for a better world.

Report Objectionable Content
Posted by John A. Barry, a DanvilleSanRamon.com blogger,
on Feb 15, 2017 at 3:12 pm
John A. Barry is a registered user.


I appreciate Cholo's comment. But putain (whore) is a generic term beyond the sexual implications. In my view, Putiin is a putain for the former evil empire, which he is doing his best to reconstitute.

Report Objectionable Content
Posted by jamevang, a resident of Greenbrook Elementary School,
on Feb 23, 2017 at 8:35 pm
jamevang is a registered user.

How we eat away at our open space, even in Palo Alto
By Sherry Listgarten | 5 comments | 6,466 views