Uploaded: May 16, 2017
A friend who recently attended the Matisse/Diebenkorn exhibit at SFMOMA expressed astonishment that Diebenkorn’s Nude on a Blue Ground (1966) was in many ways similar to a Matisse nude, also with a blue background. “How can he just paint the same thing?” my friend wondered.


If such is the case, Diebenkorn was a great thief as well as a great artist.

Austin, Texas-based artist Austin Kleon, who tells stories by redaction (blacking out all but specific words on a newspaper, etc., page), has written several art books, one of which is entitled Steal Like an Artist.

Some people say, with regard to art, that “it’s all been done.” There’s some truth to that slightly jaundiced statement. Under the circumstances, it’s not surprising to see Impressionist, Cubist, etc., influence and knockoffs everywhere you look.

In the case of Diebenkorn/Matisse, the former was heavily inspired by the latter and paid homage to his hero in many of his figurative and abstract works. (My colleague Bill Carmel’s excellent article in this space, “Matisse into Diebenkorn,” focuses on techniques and palettes that Diebenkorn used in his homages.)

As a self-taught artist, I wouldn’t for a moment put myself in a class with Matisse or Diebenkorn. But even—and maybe especially—the self-taught have influences. In creating trAction Painting, I owe a debt to Action Painters—particularly Jackson Pollock—to whose work mine is sometimes compared. But whereas Pollock dripped and splattered his paint onto canvas, I use wheeled vehicles to apply the pigment.

I’ve also been influenced by performance artists such as Andy Kaufmann and Chris Burden and process artists such as Christo. (Process art is an artistic movement as well as a creative sentiment where the end product ofart and craft, the objet d’art (work of art/found object), is not the principal focus.—Wikipedia)

In 1976 Christo and his wife-collaborator, Jeanne-Claude—along with an army of associates—created Running Fence, a 25-mile-long installation across the hills of Marin and Sonoma County. The 18-foot-high fence was composed of 2,050 panels of white nylon fabric hung from steel cables by means of 350,000 hooks. The cables were supported by 2,050 steel poles stuck into the ground and braced by steel guide wires anchored to the earth. (Wikipedia.) 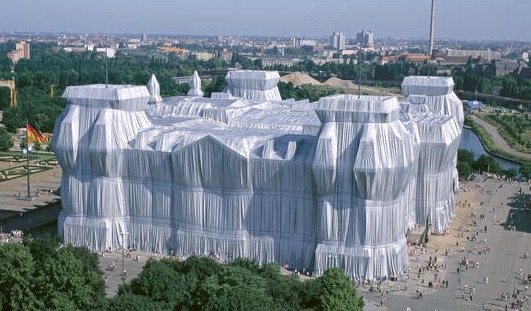 Taking a tiny cue from this monumental project, I first made a 9 x 12–foot trAction canvas, employing a walker, a Razor scooter, a toy tricycle, a wheelchair, and various shoes with patterned soles to apply the paint. Next, I built a wood frame to sit atop a hot tub—unused in the summer, in part because it’s so hot here and in part to avoid lining the pockets of the evil Pacific Gas and Electric monopoly.

I draped the canvas over the frame and wrapped the painted fabric with blue, red, and yellow rope. Because of the blistering summer sun, I had coated the canvas with spar varnish, making the covering very shiny. 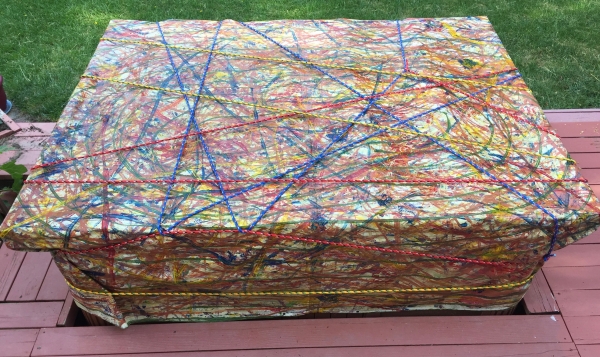 Employing trAction Painting techniques, I have paid homage to Pollock, Christo, and Suprematist Kazimir Malevich. Suprematism was a movement based on geometric forms. Malevich did a series of “White on White” paintings, my point of departure for a skate-based series. 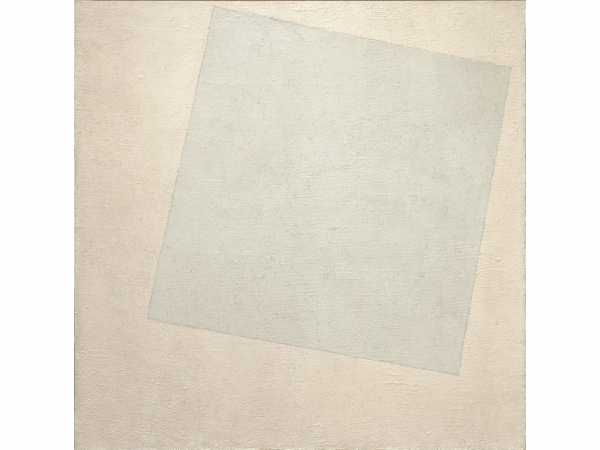 “White on White,” by Malevich. 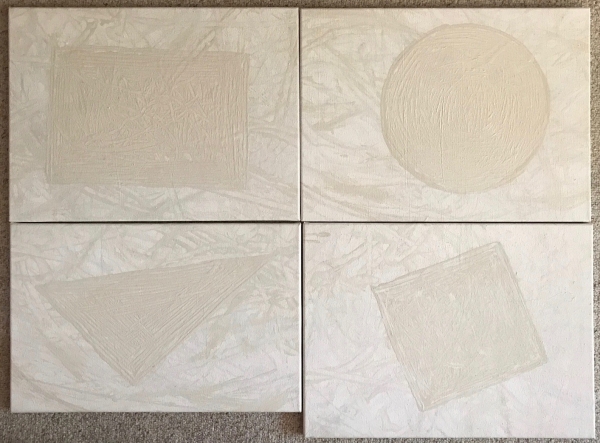 Next up on the homage front: Roadway Roly-Poly, a “skainting” (painting with skates) piece inspired by Piet Mondrian’s Broadway Boogie-Woogie.

Inspiration comes to mind when I think of "stealing". I recently attended the Benecia Open Studios and after visiting one artist, I came away with a sense of enthusiasm for her technique. I don't want to copy, but I want to participate in her process. Dibenkorn was such a big fan of Matisse. How could he not want to participate in the color palatte? Or approach the canvas with such spontaneity? Art is internal and transforming.

Report Objectionable Content
Posted by Cholo, a resident of another community,
on May 18, 2017 at 9:34 am


Painting is hard work. I admire the paintings of Matisse and Diebenkorn. The Malevich piece, White on White, is exquisite.

Painting is a demanding activity and it seems that there is no mercy from the materials that one uses. Time, money, a place to work/studio, and it's on!

This is no mercy.


Report Objectionable Content
Posted by Richard Daniels, a resident of San Ramon Valley High School,
on Sep 12, 2017 at 3:47 am
Richard Daniels is a registered user.


I neevr heard of that Reichstag! It's beautiful! And your white on white idea is awesome. I really enjoy the contrast of textures with the similarity of color. Well done!

How we eat away at our open space, even in Palo Alto
By Sherry Listgarten | 5 comments | 6,470 views