The soon to conclude (March 25) exhibit at SFMOMA of the work of Robert Rauschenberg, entitled “Erasing the Rules,” revealed that the artist spent most of his creative life at odds with the artistic establishment, even when he became part of it. He began, as the story goes, in 1953 by pranking Willem de Kooning. Knowing that de Kooning was becoming an avatar of Abstract Expressionism, the reigning “ism” of the time, Rauschenberg knocked on de Kooning’s studio door and requested a drawing and permission to erase it. In 1955 Jasper Johns suggested that the erased drawing be framed for a group show at the Elinor Poindexter Gallery. Now Rauschenberg was on the greatest hits list for American art.

In every generation, there are artists who create works that challenge mainstream art, artists who look at establishment or academic art and do something different. If the work they do is authentic and they can convince the galleries, buyers, and especially other like-minded artists that they are onto something that can change things going forward, they may be supported. There is something about experimenting with materials and working processes that results in images and objects that point to new ways of looking at the world, that look ahead to something new and different enough from the past to be significant. The artist changes the latest convention of style and content into something else. There is a special place in art history for avant garde artists whose work inspires other artists. Eventually the new style or variation becomes mainstream.

The pendulum of style and content swings between several points of view: from concentration on the outer surface of things, the decorative, the representational, the descriptive, the realistic, the abstract, the geometric, the personal, the balanced and calm and swinging toward the symbolic, the allegorical, the emotional, the naturalistic, the expressive, the organic, the social, the general, and the bold. Any combination of these qualities or adding others is fair game.

Rauschenberg really liked certain elements of Abstract Expressionism such as painting with emotionally charged color, using bold brushstrokes. Then he attached real three-dimensional objects to the paintings. He called these works “combines.” His two-dimensional work became more three-dimensional, plus he painted these found objects. He blurred the boundaries between working flat and in the round. How art objects are constructed and presented was changing from rigid rectangular borders to alternative geometries and fuzzy edges. The young artist challenged the conventions both academically and socially, by working with ideas about the process of art and whether it was necessary for art to have an author.

Rauschenberg took the essence of the style, content, and working definitions of Abstract Expressionism, Dada, and several other art movements and added to them. He kept the strong and bold colors and the spontaneous and expressive brushstrokes. He added realistic contemporary popular images both found and invented, real found objects, and he organized them by using many of the more academic compositional principles. He used humor and wit. He used found objects that resonated with his way of responding to the world around him and, especially, his life in it. It looks random, but it isn’t. It’s purposely haphazard. 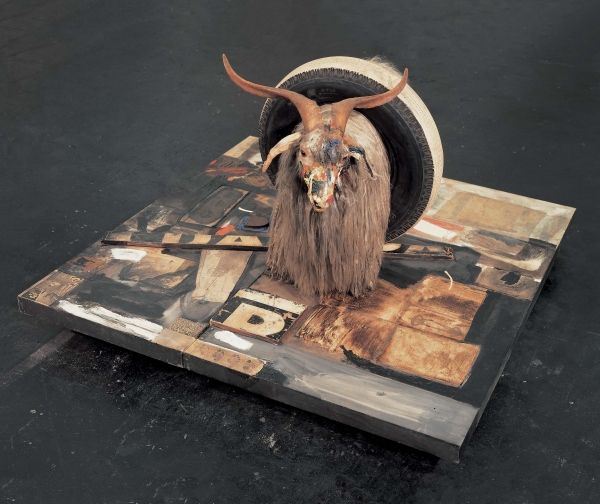 Take the sculptural painting Monogram, 1955–59. The original painting lies on the floor, image side up. Next he wraps a retreaded spare tire around a stuffed goat’s midsection as if it’s now part of the goat’s attire. Or could it be a satire on how we collect automotive memorabilia. Or could it be the artist saying metaphorically, “Don’t tread on me”? Then the “tired” goat walks onto the painting. The goat has its face painted as if with cosmetics for a night on the town, and various parts of the painting appear to be a kind of dioramic map to guide the goat and tell us where it’s been. Now, the painting most likely began on the wall, but what came next is only a guess. How the painting came to be on the ground and why the goat climbed into the tire aren’t clear. Did the goat simply tire of its normal place in the studio and wheel itself onto the painting? Is it time for the art critics to retire? The structure of the composition and the assembly of all the parts could be random, but everything seems to work as it is seen now. How and why all the parts came together is a bit of a puzzle and a hoot, or should I say a bleat!

This kind of humor and clever kinds of links, connections, and associations abound in Rauschenberg’s work. Much of the success of Rauschenberg’s art is that the connections between media, image, and process appear ordered and random at the same time. This tension plays out in much of his art process. As with the Dadaist, Constructivist, and Fauvist artists who preceded him, the idea of sampling was already established. Rauschenberg was a brilliant sampler of style, media, content, images, and objects. This pattern was also evident in his collaborations.

In addition to doing his personal work, Rauschenberg worked with other artists who were also experimenting and reaching for an understanding that was contemporary, which led to work that connected the present to something moving forward. Rauschenberg chose to work with like-minded artists, and they gave each other permission to create strategies and conceptualize problems in new ways and make decisions that weren’t obvious or safe. He designed sets and costumes for radical dance theater experiments with Merce Cunningham, Paul Taylor, Trisha Brown, and John Cage, as well as for his own dance productions from the early 1950s to the late 1970s. These collaborative projects utilized the specific strengths of each artist’s medium, and the complete pieces have a life of their own. They invented and worked with the content, format, and expression so that the finished work represents a different way of looking at things or experiencing the world. Radical is a word used often in describing these works.

Many of the recent exhibits at SFMOMA, the de Young, and the Legion of Honor showcase exhibitions of artists such as Rauschenberg who broke the molds, bucked the conventions, and took their “erasers” to the task. The strength of their work prevailed, and other artists followed this train of thought, until a new generation decided that a new way of working was preferable. Technology is playing a significant part in the evolution of art, and Rauschenberg had a hand in that as well. Many of the pieces in the exhibit used digital formats for making images with printers. 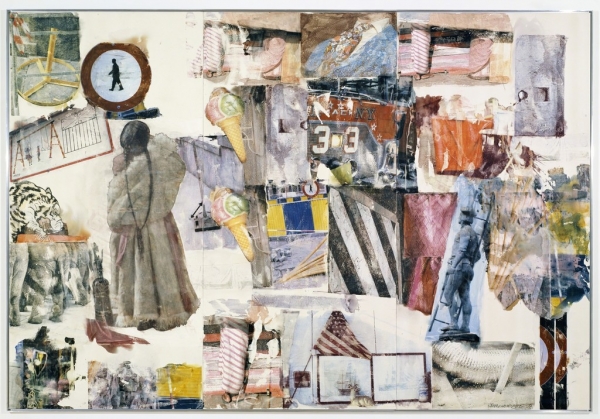 The big idea for this exhibit was that Rauschenberg was a product of his time and that his creativity enabled him to rise above the obstacles and pitfalls of the existing art establishment and evolve with the art community. This exhibit is a celebration of an extraordinary artist who used his keen instincts and his powers of visual communication to their best advantage. Much of his work seems so very familiar, and that’s because he made these art objects before this way of creating art became commonplace.

I think that the work of Rauchenberg happened because he was preceded by Kurt Schwitters:


Report Objectionable Content
Posted by Cholo, a resident of another community,
on Mar 23, 2018 at 3:11 pm


Marcel Duchamp also had a significant impact on the art of Rauchenberg:

Comfort, communication -- and the lack of both
By Gina Channell Wilcox | 17 comments | 1,556 views