O’Neill Goes to the Movies


The film industry has been good (and not so good) to Eugene O’Neill, who lived at Tao House in the Danville hills from 1937 to 1943, where he wrote Long Day’s Journey into Night, among other works. A definitive source of information about the playwright and his life can be found at the Eugene O’Neill Foundation, of which I—full disclosure—am a member.

O’Neill is generally acknowledged to have been America’s foremost playwright. Of his 50-plus plays, 13 have made it to the big screen, with varying degrees of success. Of those 13, only 4 can be found on Netflix; other film sites may have some of the others—for example, you can find an unwatchable, poor-resolution Ah Wilderness! on YouTube. This botched, truncated production is a 1959 Hallmark Hall of Fame broadcast…say no more! The Netflix quartet comprises the 1930 English-language version of Anna Christie (a German version was shot at the same time), the 1962 version of Long Day’s Journey into Night, the 1973 version of The Iceman Cometh, and1940’s The Long Voyage Home. I have seen all four as well as others.

Filmed in the early days of sound, Anna suffers a bit from the hangover of exaggerated acting (a.k.a. “chewing the scenery”) that afflicted some early “talkies.” From an accent perspective, Greta Garbo fares better than Charles Bickford. The film is moody and atmospheric, shot by Williams Daniels, who also filmed the German version; each version has a different director: Jacques Feyder for the German take and Clarence Brown for the English. I prefer the German version.

The play was first filmed during the silent era, in 1923.

This 1940 John Ford picture is a conflation of O’Neill’s The Moon of the Caribbees, In the Zone, Bound East for Cardiff, and The Long Voyage. Legendary cinematographer Gregg Toland was behind the camera. The stark style of Toland, who also shot Orson Welles’ Citizen Kane and The Grapes of Wrath (also for Ford in 1940) presaged the Film Noir esthetic.

Ford was a great director and shows his mastery of the film genre here. But he brought his pal John Wayne onboard as a Swedish sailor—which does not quite work, although Wayne’s turn here is much more convincing than his stint as Genghis Khan in The Conqueror. Voyage was reputedly O’Neill favorite rendition of any of his plays on celluloid. 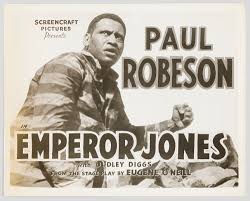 I watched the 1933 version, with Paul Robeson in his first film role. According to Wikipedia, it was made outside the studio system; financed privately; and directed by iconoclast Dudley Murphy, who had sought O'Neill's permission to film the play since its 1924 production in New York.

Apparently no one has yet restored it. I watched a poor-resolution print of the film on a cable movie channel; the same lousy rendition is available on YouTube. Robeson’s commanding performance overcomes the resolution and some other issues with the production, such as less-stellar performances by some of the other players.

Desire Under the Elms 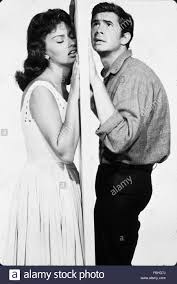 Who made the casting decisions for this 1958 film?! Burl Ives as Ephraim Cabot, family patriarch, is passable. But Sophia Loren as his hot young second wife? And Anthony Perkins as Ephraim’s son Eben, who gets under the sheets with Sophia?! (The two were paired again, more effectively, four years later, in Five Miles to Midnight.) Burl Ives essentially played one character time and again. Ephraim Cabot is Big Daddy in Cat on a Hot Tin Roof (also made in 1958), by another haunted playwright, Tennessee Williams.

This would have been a better film had the producers made some more-thoughtful casting choices.

Like Desire, Electra takes place in New England. Rosalind Russell (Livinia Mannon) has the submerged hots for her big daddy (Raymond Massey.) “Vinny” has overt desire for Captain Brant (the illegitimate son of Vinny’s uncle), but Brant has plans to take off with Vinny’s mother, once they get daddy out of the way. Brant obtains poison for Mom, who administers it to her husband. Vinny learns of this and goads her PTSD-afflicted brother into killing Brant. Mom and brother eventually commit suicide, leaving Vinny alone. As in an Elizabethan tragedy, the bodies pile up.

Film critic Leonard Maltin tagged the film a “heavy, talky drama, even in the 105-minute version,” which lops more than an hour off the 173-minute original. But it’s a long play, with heavy content. A little histrionic in spots, and Kirk Douglas (miscast in my opinion) doesn’t quite make it as Vinny’s betrothed, Peter Niles. 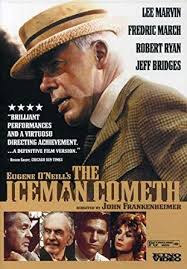 But for sheer duration, this film takes the prize. It’s a minute short of four hours—with two intermissions. Produced in 1973 by Ely Landau for American Film Theater, it was 1 of 13 film adaptions of plays filmed from ’73 to ’75. Landau’s widow explains in an interview contained on one of the two discs from Netflix that house the full play: American Express subsidized the project but not heavily enough to pay Hollywood wages to directors and stars. So John Frankenheimer (who helmed Iceman) got a little more than the $25K that went, respectively, to Lee Marvin, Robert Ryan, and the other A-listers in the film series. Landau explained that they worked for so little money mainly for the love and challenge of performing such a work.

In addition to Marvin and Ryan, the cast includes a young Jeff Bridges and an old Frederic March, who came out of retirement to play the part of Harry Hope. (It was to be the final film of Ryan, who died before it was released, and March, who passed away two years later).

In retrospect, director Frankenheimer said of the play:

“We found the most difficult thing was to cut it. We cut one hour and 20 minutes out of the original, but by the time we’d finished it, we’d put back in an hour. It was a marvelous movie. We were like a repertory company; we never wanted it to end. I tried to show Hickey as sane and not the way I've seen him interpreted, as insane. I think you have to live your life without illusions, not with them.” Pauline Kael said in her review that you “only have to look at photos of O'Neill to see this was a face with no illusions.” 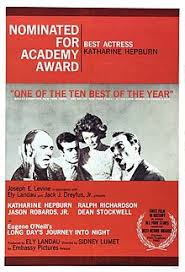 This O’Neill family autobiography is the most intense of all the film adaptations. And—along with Iceman—one of the most theatrical, as opposed to cinematic, given that each takes place in a single oppressive interior location. The Tyrone clans stands in for the O’Neills, with Dean Stockwell as young Edmund (O’Neill himself), Sir Ralph Richardson as the family’s “Big Daddy,” Katherine Hepburn as Edmund’s drug addict mother, and Jason Robards as older brother James, Jr. With a runtime of nearly three hours, this film is an emotionally draining experience, convincingly brought to the screen by director Sidney Lumet.

Other Films Based on O’Neill Plays

I couldn’t locate any of these:

• The Constant Woman (1933), based on Recklessness
• Electra (2010), an Indian film that draws on Mourning, among other sources
• The Hairy Ape (1944), with William Bendix as said simian
• Strange Interlude (1932), with “King of Hollywood” Clark Gable and Norma Shearer
• Summer Holiday (1948), a Mickey Rooney musical based on Ah Wilderness! (sounds perversely intriguing)

All in all, there’s a fair amount of celluloid O’Neill to be seen—if you can find it!

John A. Barry and Bill Carmel is a registered user.

Doing more with the natural spaces we have
By Sherry Listgarten | 8 comments | 3,479 views