﻿ Doug Forcett's lesson? It's hard to be good these days | A New Shade of Green | Sherry Listgarten | DanvilleSanRamon.com |

Doug Forcett's lesson? It's hard to be good these days

Uploaded: Mar 1, 2020
Most of us don’t wake up and think: “I’ll go to work today and overheat the planet!” or “Let’s enjoy some snacks while de-homing the orangutans!” or “I’ll have that salad to go and make more plastic garbage!”

And yet every day we seem to do this. Even if we are more aware of environmental impacts than we used to be, and even if we care, we face unwinnable tradeoffs and hard-to-change practices. So I found myself laughing recently at a few episodes of The Good Place, a Netflix series created by Michael Schur. (1)

For those of you who aren’t familiar with the series, it’s about a group of people who are navigating between “the Good Place” and “the Bad Place” in the afterlife, trying to maneuver their way into the former. There is a mysterious process by which a person is assigned to one or the other after they die, and partway through the series they are trying to figure it out so they can better position themselves and others for success. They learn that a few decades ago a young man named Doug Forcett somehow managed to guess how the process works (it is an elaborate points system), and ever since he has been optimizing his life on Earth so that he will be chosen for the Good Place. In Season 3, Episode 8, two of the group (Michael and Janet) go to visit Doug on Earth to see what they can learn. 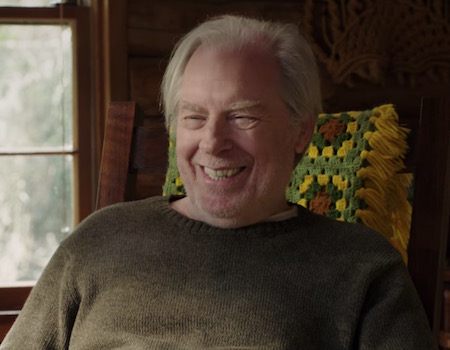 Doug Forcett, a character in Netflix’s The Good Place

Doug Forcett, played by Michael McKean, is, to put it bluntly, a bit of a mess. He eats only vegetables that he grows himself, including lentils because “they require very little water and have the smallest carbon footprint”. He drinks his own filtered pee (“one man’s waste is another man’s water”), and has adopted 71 dogs. He anguishes over small things, like stepping on a snail (he later holds a funeral for it) or forgetting to offer water to a guest (he later offers his kidney to make up for it). When Doug decides to make a donation to a mollusk organization in the snail’s memory, he opts to walk the 200 or so miles from Calgary to Edmonton, presumably to avoid the greenhouse gas emissions.

A little while after Michael and Janet return to the afterlife, Michael (played by Ted Danson) is horrified to learn that despite Doug’s considerable efforts, he is not on track to be assigned to the Good Place. In fact, no one has been assigned to the Good Place in centuries. Has the points system been hacked? An off-hand remark (2) leads to a realization. Michael looks at the points accounting for someone in the 1500’s who gave some flowers to his grandmother, normally a winning action. 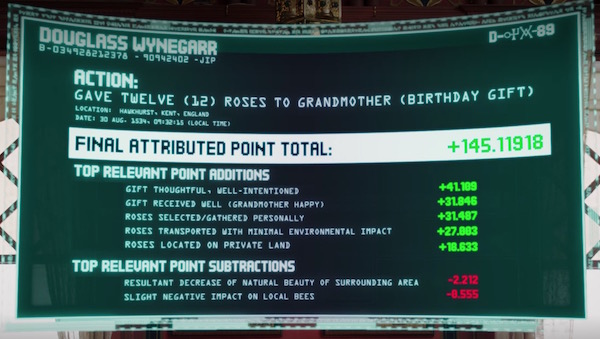 Points assigned for a gift of flowers in the 1500’s. Source: Netflix’s The Good Place, S3 E8

And indeed, it is a positive action, with only a few points taken off for removing some natural beauty (the flowers were hand-picked) and slightly degrading the habitat of local bees.

Michael then takes a look at a similar but more recent action, another person giving his grandmother a gift of flowers in 2009. 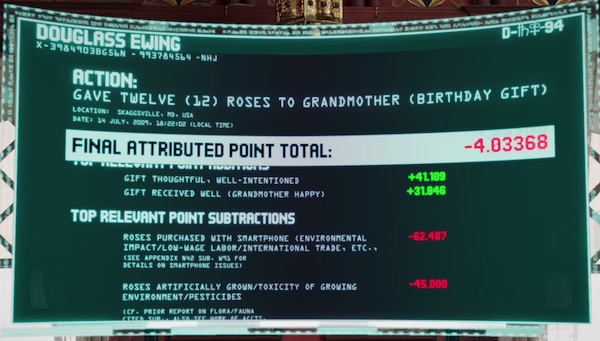 Points assigned for a gift of flowers in 2009. Source: Netflix’s The Good Place, S3 E8

This action is more problematic. Pesticides were used to grow the flowers, which were picked by exploited migrant workers. They were delivered from thousands of miles away and ordered through a cell phone whose manufacture had a number of negative impacts. Michael realizes that it’s not the case that the points system has been hacked. Instead he muses, “Every day, the world gets a little more complicated, and being a good person gets a little harder.”

Later on, in episode 10, Michael explains this to his friends as follows, bringing up another points chart. 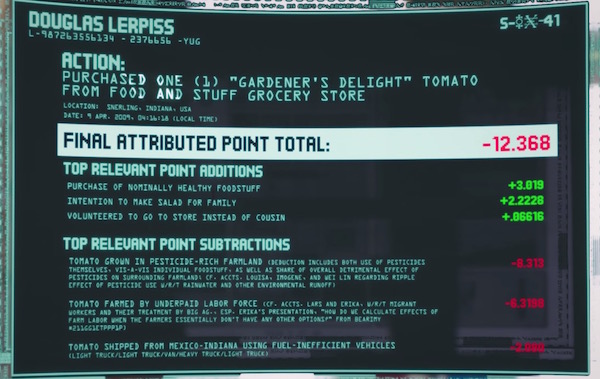 Points assigned for the purchase of one “Gardener’s Delight” tomato in 2009. Source: Netflix’s The Good Place, S3 E10

“These days, just buying a tomato at a grocery store means that you are unwittingly supporting toxic pesticides, exploiting labor, contributing to global warming. Humans think that they’re making one choice, but they’re actually making dozens of choices they don’t even know they’re making”.

The show goes on, but for the purposes of this blog post, I’ll stop here. Do you have a sense that it is harder to “be good” or at least “do no harm” than it used to be? If so, why do you think that is? Is it because our lives are more complicated, as Michael surmises? Or because we prefer engineered over natural solutions to things? Or because business values and personal values are not aligned and business values are dominating? Or is it that the “good” values have proliferated, creating a minefield of political correctness? (As Kristen Bell's Eleanor says: “There’s this chicken sandwich that, if you eat it, it means you hate gay people.” (3)) Or maybe nothing has really changed — our ingenious but short-sighted nature has always made us prone to creating unintended negative consequences — but with more people now we are doing it at scale, making our oversights more obvious and more serious? Or is something else going on?

Notes and References
1. I recommend this show, by the way. It is engaging and funny and thought-provoking.

2. Tahani, played by Jameela Jamil, is venting to Michael her frustration with her matchmaking efforts. “Every time I do something nice, it backfires. There are so many unintended consequences to well-intentioned actions. It feels like a game you can’t win.”

3. Eleanor is referring to the Chick-fil-A controversy.

4. FWIW, in the last episode of the series, Doug can be seen happily eating fried chicken in the Good Place.

Comment Guidelines
I hope that your contributions will be an important part of this blog. To keep the discussion productive, please adhere to these guidelines, or your comment may be moderated:
- Avoid disrespectful, disparaging, snide, angry, or ad hominem comments.
- Stay fact-based and refer to reputable sources.
- Stay on topic.
- In general, maintain this as a welcoming space for all readers.

Does Netflix purchase offsets to adjust for their greenhouse gas creating data centers? Do you as a subscriber and user?


@Resident: You can read more about the impact of watching Netflix here. There was a lot of misinformation about it in the news a few months ago. This updated analysis indicates that “the average carbon footprint of (streaming) a half-hour Netflix show is equivalent to driving around 200 metres in a conventional car.”

You can read more about Netflix’s sustainability programs here. They say they are relatively new at this, so for now they are working more with offsets and credits than developing their own renewable energy resources, like other large tech companies. But you can see that “In 2018, 100% of our estimated direct and indirect non-renewable power use was matched through the following renewable energy and carbon offset projects. These projects span 23 different states/regions and 16 different countries.”

Finally, yeah, I offset all of our household emissions, including streaming, but also things like our portion of health care and the military, etc. I estimate it and then buy offsets. Most households here could do the same, but offsets are not as effective as using less. So mostly we focus on that, with mixed success.

FWIW, I think any normal person would go nuts worrying about all these tiny sources of emissions. Streaming video isn't even on my radar. The "big four" are: transportation (car, plane), diet (esp beef, food waste), home energy (esp heating), and general consumption. I try to use less of those every day.

I think it's also important to be informed, which means getting your information from reliable, accurate sources. I try to reference those in this blog, but lmk if you need suggestions.

Thanks for the question.

Report Objectionable Content
Posted by MD Mom, a resident of College Terrace,
on Mar 8, 2020 at 1:15 am
MD Mom is a registered user.


Hi Sherry,
I want to thank you for this post. My husband and I just finished watching the episodes of the show you referenced (perhaps it could be referred to as the "Forcett Saga"?). Very entertaining, and thought-provoking. It illuminates well the reasons it is now so hard to "do the right thing". Thank you for bringing it to our attention, and thank you for your blog.

Doing more with the natural spaces we have
By Sherry Listgarten | 3 comments | 1,841 views