As I reported last year, Vic was ready to join his wife in retirement and worked out a deal with the Castro’s and their partners, the Munoz family (father Antonio, daughter Jessica and son Antonio Jr.). She’s worked at Vic’s for 22 years and her husband cooked there for 11 years before leaving for another job—he’s now back in the kitchen.

The timing is providing to be both a major challenge and an opportunity.

The shelter-in-place order converted Vic’s to a takeout and delivery operation in mid-March. The partners already had updated the ingredients, shifting from frozen/pre-cooked product to fresh and adding new dishes. Because Vic updated the menu a few months before they’ve made limited changes—more are planned down the road.

They’re also planning to increase daily specials and are now offering a $7 early bird special from 7 to 9 a.m. Monday through Friday (the $9.95 breakfast at other times). One tweak to the menu was adding the Stay in Shape entrees such as an egg white scramble with soy chorizo or turkey sausage and avocado toast with arugula.

Once the shelter-in-place took effort, business held up in the takeout mode for a couple of weeks, but they were a bit concerned about it currently.

The forced closure created the opportunity to do cosmetic improvements in the restaurant without having to work around patrons or do it at night. They anticipate that work will be done before the current shelter-in-place order is scheduled to end in early May. The sports concept will continue. 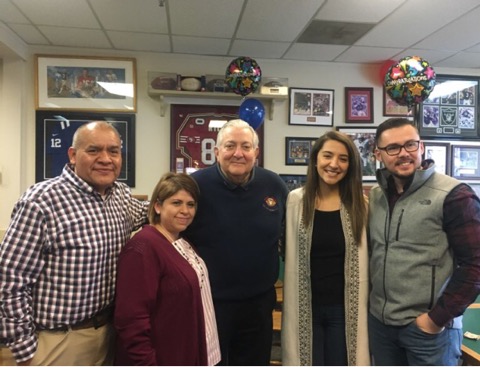 The two families knew each other through church and Laura and Ernesto reached out to Jessica Munoz when they were considering buying the restaurant and needed a partner. She’s joined by her dad and her brother.


“More than anything we want to keep the restaurant as a Pleasanton staple. We just want to modernize it and to attract the new people that are moving to Pleasanton and the new generations that are coming to Pleasanton,” Laura said.

“We want our customers to feel like it's a safe space where they can come and always feel welcome. So we just want to continue innovating our menu but still keeping that hometown concept,” she said.

Both Ernesto and Laura emphasized that they will continue to support the schools and also want to continue to hire young people as their first employer.

fcapilla is a registered user.


Good article Tim. Laura and Ernesto are very nice people. I know they will do an excellent job. Got a peek of the remodel this morning, looks great. It's a new restaurant with the old theme. Anxious for them to reopen.
Frank Capilla

Report Objectionable Content
Posted by Bill, a resident of Pleasanton Heights,
on Apr 16, 2020 at 6:29 pm


@fcapilla - I believe they ARE open. But I think I know what you meant.

I'll add them to my list of takeout spots right now. Man, I am really getting fat supporting downtown. But I want to keep all these folks going.

Report Objectionable Content
Posted by Karl Aitken, a resident of Pleasanton Valley,
on Apr 17, 2020 at 11:25 am


I enjoyed Vic's and the Townhouse before Vic took it over.

I'm looking forward to trying the new place once I can eat out again.


So happy for these new owners and that Vic's will live on - provided we all support them during these difficult times. Mother's Day wouldn't be the same if I couldn't have Vic's brunch with my family even if it needs to be takeout.

Report Objectionable Content
Posted by Mary T, a resident of Vintage Hills,
on Apr 18, 2020 at 5:51 pm
Mary T is a registered user.


So glad that Laura and Ernesto and the Munoz family can keep this long time Pleasanton institution going. We have known Laura for a long time, seeing her almost every time we go in for brunch each Saturday. Vic's will only be enhanced by this new team. Now we need to support them with takeout through this difficult time.

Report Objectionable Content
Posted by Steve M, a resident of Sycamore Heights,
on Apr 19, 2020 at 3:31 pm


One of the greatest aspects of Vic's are the people who work there. Now they own the place! Wonderful, and can't wait until it reopens.

Some of the best jobs around
By Sherry Listgarten | 5 comments | 3,502 views

People and Relationships Never Stop Being a Work in Progress
By Chandrama Anderson | 3 comments | 1,979 views

Wine about it
By Monith Ilavarasan | 0 comments | 529 views

What Is a Good College?
By Elizabeth LaScala | 0 comments | 400 views