This overview of the Danville gallery scene over the years is not intended to be comprehensive or exhaustively researched. Rather, it is based mainly on my memories and personal experience, supplemented by some information and images from Bill Carmel.

Gallery: mid-15th century: covered walk or passageway, narrow and partly open passageway along a wall. From Old French galerie, “a long portico” (14th century.), from Medieval Latin galeria, of unknown origin. Perhaps an alteration of galilea, “church porch,” which is probably from Latin Galilaea, “Galilee,” the northernmost region of Palestine. Church porches sometimes were so called, perhaps from being at the far end of the church. Sense of “building to house art” first recorded 1590s.

Depending on how the word is defined, there are currently two art galleries in Danville…at least according to my interpretation. But plenty of others have come and gone over the years.

I moved from San Carlos to Danville in 1999. For several years prior to that, I started doing art projects with my young son. I then graduated to creating assemblages. Just a dabbler, I had fun. When I got to Danville, I decided to transition from dabbler to dilettante.

Before I arrived in the area, artist Vicky Richardson and others founded the first collective art gallery, the Danville Fine Art Gallery, in the Tri Valley area, in the Blackhawk Shopping Center. There were several ownership changes over the years, and the affordably priced space traded locations with these changes. The original commercial Blackhawk Art Gallery coexisted with the Danville Fine Art Gallery until the late 1990s, when a new owner ended the lease.

After I’d been in Danville for a while, I learned about the Danville-Alamo Cultural Alliance (DACA—too bad it wasn’t the Danville-Alamo Design Alliance), a membership cooperative with exhibition space above the Village Theater. (The Theater currently has a small gallery in the foyer of the building.) In 2006, I paid the nominal membership fee to join DACA. For several years I had been creating assemblages depicting visual puns. Visions of my “Visual Verbiage” hanging on the walls danced in my head.

About a week after I joined, the dance ended. DACA folded, in part because the town of Danville, which had been donating the exhibition space to the group, kicked them out. (I hoped that DACA’s demise had nothing to do with my having joined the organization). Danville gave as the primary reason for evicting DACA its noncompliance with ADA (American with Disabilities Act) mandates. The only way to reach the exhibition space was to mount a steep set of stairs. 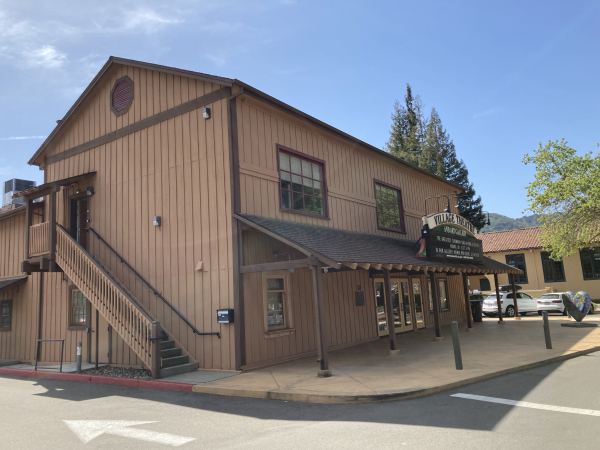 But some of the former DACA members and I believed that another reason was the town’s desire to put offices on the second floor. However, the town did allow the ex-DACAns to use the former exhibition space for several weeks for informal get-togethers. One former member ran a poetry reading, for example. I attended those “salons” and got to meet local artists, some of whom belonged to ADAS (Alamo-Danville Artists’ Society), a group that had been around for decades and persists to this day.

I thought about joining ADAS but passed after attending a meeting, which I found to be rather self-approbatory. Then something happened that made me to change my mind. A local developer was donating the old Contra Costa Times building on Hart Avenue to be used as gallery and studio space. The two-story structure featured about 2,000 square feet on each of its two floors. The deal was that ADAS could use the building for six months, at which time the developer was going to raze it and start construction of a commercial-residential complex.

ADAS members could exhibit/work in the gallery/studio space. So, I joined ADAS. The venture was dubbed the Pioneer Gallery, named after the Valley Pioneer newspaper, housed in that building until 1988.

The building had seen better days. I referred to some of the dubious wiring in the place as a “code quagmire.” But the new inhabitants forged ahead, chipping in to buy paint and other supplies, and we started to fix the place up, after moving in, in the fall of 2007. A board was soon elected, and the most numerically challenged member (me) became Treasurer. In spite of that poor choice, the Pioneer prospered. Artists created, exhibited, and sold their work. Each month an individual artist was featured.

In addition to serving as exhibition space, the first floor offered Thursday-night jam sessions, organized by member Stephen Sanfilippo, a drummer. Member Phil Hellsten painted a 16 x 16–foot representation of St. Jude on the roof. Studios were in six rooms on the second floor: three large, one medium, two small. The large and medium rooms were shared by multiple artists.

A mainly splendid time was had by most. However, several bluenoses in the membership invoked the specter of censorship. One particularly puritanically minded member went so far as to paste fig leaves over parts of an artist’s painting—without first asking permission and risking damage to the work. In light of such theatrics, the group divided into two camps: pro- and anti-censorship, with most on the anti- side.

Tension mounted as the six months extended to 18, after which, the owner-developer gave the group an eviction notice. Following one big final Pioneer party, ADAS was out of the gallery business. But not for long: The group made an arrangement with the Blackhawk Shopping Center and procured free space. The Blackhawk Gallery exists to the day and has been at that venue for more than ten years. Quality of the work there is all over the place. 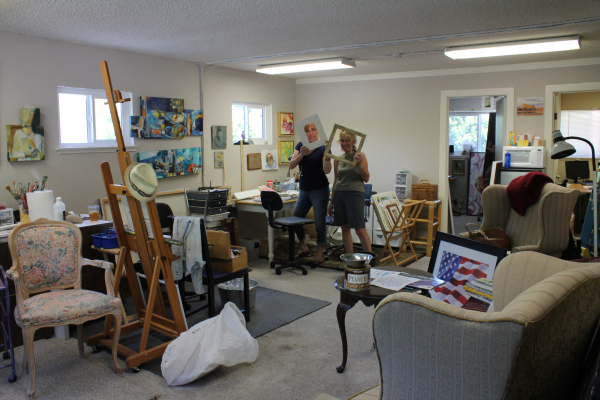 Two of my studio mates in cramped quarters.

For several years after the Pioneer’s closure, the building’s owner continued to rent studio space on the second floor. That studio space eventually shrank to three adjoining rooms—one large, two small. The two small rooms were leased as offices, so five artists, including me, and their easels, tables, paints, etc, were crammed into a room less than 400 square feet in size. After the owner failed to get a permit for his planned project, he sold the building. In 2013, the new owner kicked the remaining studio artists out and converted the entire second floor to office rentals. He also covered Hellsten’s topside opus, and other works with which he’d festooned the roof, with white waterproofing compound. Not for nothing is Jude the patron saint of lost causes. The building is currently occupied by a “dog spa” and other businesses. 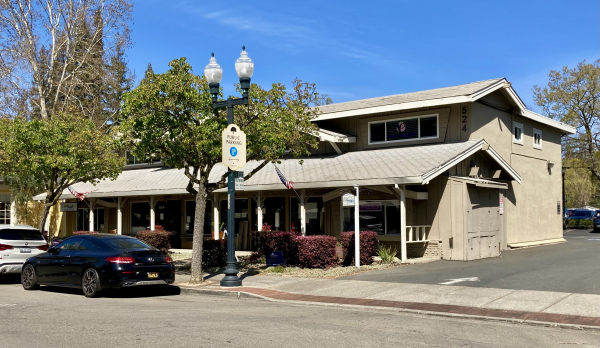 Site of the former Pioneer Gallery.

Not long after ADAS got the boot from the Pioneer, an artist named Kevin Milligan arrived in town. Milligan was an ambitious landscape painter with enough wherewithal to rent about 1200 square feet on Hartz Avenue. He established a small gallery in the space and had grandiose visions of adding a wine bar. He encouraged Bill to create a sculpture for the building’s portico. But the town nixed Bill’s work, entitled “The Hero.” No hero emerged to save Milligan’s gallery. That building is now home to Bliss Danville. 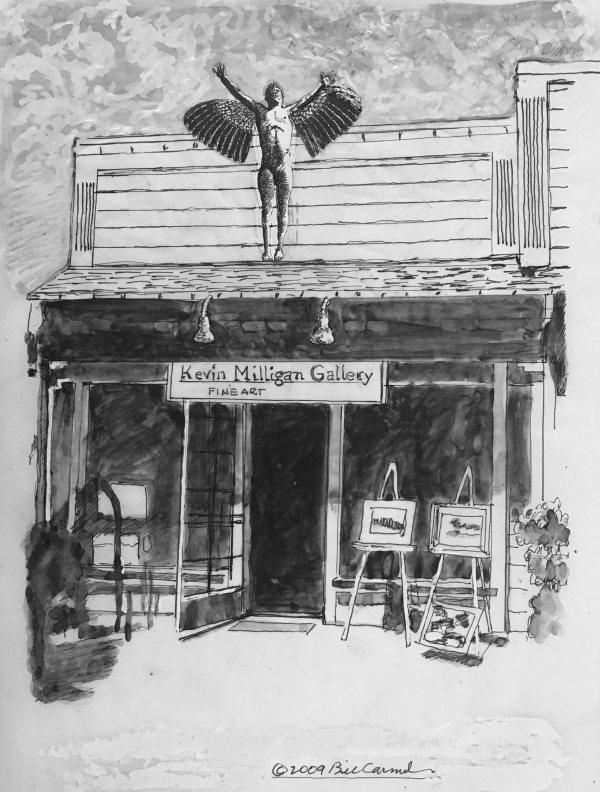 Bill’s design for the Milligan Gallery.

After a year or so, Milligan decamped to Carmel, where he opened another gallery—still in operation.

The aforementioned Stephen Sanfilippo next gave it a go. The Pioneer Gallery building’s owner had space available in Danville’s Rose Garden shopping center, and he allowed Sanfilippo to use the space as a gallery. Sanfilippo exhibited his and other artists’ work. But his gallery was short-lived. Like Milligan, he headed for Carmel, where he also operates a gallery. Sanfilippo’s one-time art venue is now occupied by a Subway franchise…from gallery to galley.

Next up: Michael Tate. Tate, a sign painter who showed up one day from Sacramento and somehow conned (eh, “persuaded”) the owners of a commercial building on Railroad Avenue—a venue that had previously housed Pegasus Bicycle Works—to let him have the cavernous space rent-free. Tate’s ultimately unfulfilled pitch to the owners was that he would create an arts venue to draw traffic to the strip mall housing the gallery, benefitting the other tenants, two of which were Chow’s and La Boulanger—both now gone. (The building is currently home to Joint Chiropractic and other businesses.) London’s Tate Gallery this wasn’t.

Tate made an effort, having exhibits and concerts in the nearly 3000-foot cavernous space. Many local artists—including Bill Carmel and I—exhibited and volunteered at the “Tate Gallery.” But Tate didn’t have the resources to realize what he’d pitched, and before long his gallery was gone, as was its short-lived successor, run by the owner of a gallery in Capitola. Tate had left town under cover of darkness, after reputedly defrauding some artists who’d exhibited there.

So, what’s left on Galmory Lane? The Village Theater Gallery, operated by the town of Danville, and ADAS’s Blackhawk Gallery.

The apparent moral of this story: to run a gallery—here, and probably anywhere—you either need adequate resources and a keen business sense. Or you need to find a patron of some sort. Or both.

Although Glamory Lane is littered with many defunct galleries, other options have been attempted. One, the framing shop, combines that business with a “gallery,” usually selling prints and exhibiting some work. In that category, locally, was Art on the Lane, long gone from East Prospect Lane.

Beyond the borders of Danville, the Lamorinda Art Council has managed to put together one of the best civic-oriented galleries in the area. So has the Richmond Art Center. These private 501 C-3s work with the local city and county governments (City of Richmond and Friends of the Orinda Library).

An artist/gallery operator in Lafayette who has succeeded on her own—so far—is Jennifer Perlmutter https://jenniferperlmuttergallery.com/. But she, too, has been bitten by the Carmel bug, vacating Lafayette and relocating to that city. Perhaps Carmel’s fame as a vacation destination and magnet for luxury lifestyles offers galleries a better chance for commercial success.

But the suburban gallery graveyard around here highlights some of the difficulties of creating and running a successful exhibition/sales venue for art.

kasia kessler is a registered user.


Great reading about "ole art times" John!
Per the Danville Pioneer art Gallery, you forgot to mention in the article the hard work myself and fellow artist Leslie Ruth put into creating a store within the Pioneer Gallery of fellow artist's work. In our limited run there we sold many small, affordable pieces and reproductions. Great fun and miss the many art friends I meet there.
Thanks so much for the memories!
Ciao, Kasia Kessler
Art Coordinator, Diablo Valley College Library


Thanks for mentioning the store, Kasia--an oversight on my part. --JB

Some of the best jobs around
By Sherry Listgarten | 5 comments | 2,979 views

People and Relationships Never Stop Being a Work in Progress
By Chandrama Anderson | 1 comment | 1,656 views