Uploaded: Apr 5, 2022
When Sierra at Tahoe General Manager John Rice and his team started planning for the resort’s 75th anniversary a few years ago, there’s no way they could have foreseen what 2021-22 has brought.
The resort, a favorite destination for both South Lake Tahoe residents and day skiers from the broader Sacramento area and beyond, suffered major damage in the Caldor Fire last August. An insurance team coated buildings in fireproof materials so only one building, the maintenance structure with all of its snow cats and other equipment, burned. It wasn’t good news for ski lifts.
The West Bowl Express, which serves favorite intermediate terrain (we used to head there in the morning and leave when our day was done to return to the parking lot), was declared closed for the season in the aftermath of the fire. Another key lift that provides access to the top of the mountain, the Grandview Express, was damaged. The woven steel tow rope contains a plastic core that was wrecked so a new cable had to be ordered from Europe. Enter the supply chain issues.
In addition, Sierra is the first major ski resort in North America to be ravaged in a fire so the mature pine and fir trees that framed the runs needed to be removed. For the resort management and the U.S. Forest Service that leases the land, it’s been a new game as they figure out how to proceed.
For Sierra managers, who originally had hoped to re-open early in 2022, that date slipped away quickly. Their team managed to rehang the new drive cable on the Grandview lift during the winter, but they’re not ready to turn the lift and open the terrain it serves.
Instead, the 75th anniversary celebration will be a two-day event this weekend with live music and a snowboard contest on Sunday. Just two lifts, the beginner express quad and Nob Hill will be running, but the resort will manage to welcome its boarders and skiers. Presale tickets are sold out and ticket sales on the weekend are subject to availability.
The website warns people to stay on the open slopes and avoid going off any trail because of low snow pack and potential hazards from the fire. 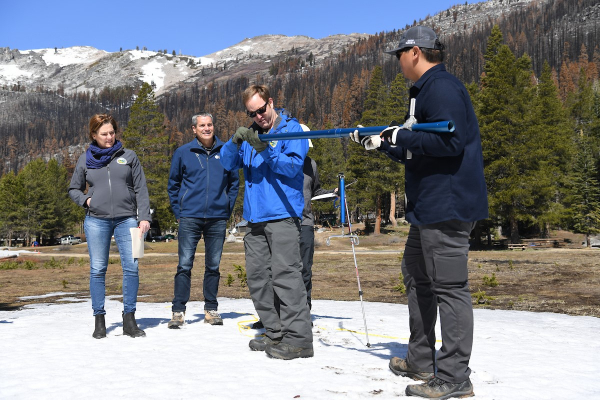 Judging by the picture shared by the state Dept. of Water Resources from its April snow survey in Phillips Meadow, just north of the Sierra at Tahoe entrance road, that’s an appropriate description of the conditions. There were only patches of snow remaining among the bare dirt in the meadow, a far cry from the heavy snow pack that covered it in December.
Sierra managers, according to their website, are planning for a full season in 2022-23 and are selling season tickets. Here’s hoping they hit that goal because the resort is among the largest employers in El Dorado County to say nothing of serving eager skiers and boarders who had to go elsewhere in this unusual season with heavy snows in December and then nothing for January and February.

Doing more with the natural spaces we have
By Sherry Listgarten | 8 comments | 3,463 views

The future of homework
By Monith Ilavarasan | 0 comments | 681 views