﻿ Chance of rain? This isn't time for city to dip into rainy day reserves | Around the Valley | Gina Channell Wilcox | DanvilleSanRamon.com |

Chance of rain? This isn't time for city to dip into rainy day reserves

Less than two weeks ago we experienced a rare and unexpected June rain.

The rainy day fund, money to be used during a time when the city’s revenue decreases so normal operations can continue, is part of the general reserve fund balance. It was started in 2020 because the council predicted (correctly) that revenue would decrease because of the “unknown” of the pandemic.

The pandemic is not over and the economy is not healthy.

Looking at the highest inflation in four decades, gasoline close to $7 a gallon and another surge of COVID, most Americans are battening down the hatches. They are limiting expenses because costs are going up but the paycheck remains the same (if they’re lucky).

Cities should also batten down the hatches for the same reasons.

Before the pandemic, the city would transfer up to $5 million from the general fund to the capital improvement fund. Beginning in 2020, some money that would have funded capital improvement projects was diverted to the rainy day fund just in case it was needed. (There was no staff available to do the projects anyway.)

Current projections indicate a net $1.7 million increase in revenue, and this amount was transferred to the capital improvement program (CIP) fund.

This $1.7 million is based on a 12-month projection, which inherently involves uncertainty.

Property taxes, the main source of revenue, are projected to increase slightly and are pretty consistent year over year. However, property taxes did actually decrease in 2011, just after the Great Recession.

Inflation and other factors are increasing costs. Mahim Shah, the city’s interim finance director, gave an example of a $240,000 increase in the parks, median and street cleaning contracts alone.

One of the unknowns is if higher costs of goods and services will negatively affect consumer spending. If it does, sales tax, the city’s second largest source of revenue, is sure to decrease..

In May, Mark Zandi, chief economist of Moody's Analytics, said he puts the odds of a U.S. recession in the next 12 months at “one in three” and “even odds over the next few years.”

Note that Zandi’s remark was made before the Labor Department reported that inflation in May grew by 8.6%, the highest rate since 1981.

At a council budget workshop May 31, the council discussed how to allocate the $1.7 million to their priority capital improvement projects, which include the Bernal Community Park - Phase I, West Las Positas Boulevard repairs, library roof replacement, library lighting and fire control panel, a cricket pitch, a skatepark at Ken Mercer Sports Park and Century House repairs

Agreeing that fully funding projects was better than spreading money over many projects, the council decided to fully fund critical projects like the library roof replacement and lighting. (Steve Kirkpatrick, the city’s director of engineering, told the council the library fire control panel could be delayed one year.)

The cricket pitch and field, while a new amenity, would be fully funded with an additional $250,000, a relatively low amount in the scope of the projects listed. Ongoing maintenance costs, which have to be factored in with new amenities, will likely not be significantly more than maintenance of the ball field currently there.

Drivers who use West Las Positas call it a “roller coaster.” City traffic engineer Mike Tassano said that the dips and bumps are more of an annoyance than a hazard, but that maintenance is necessary more frequently and the area of repair is becoming larger every year.

Brown pointed out some or all of the money for repairs to the road could come from other sources, such as Measure B (which expired in 2020), Measure BB and gas tax. She also brought up charging users like Pleasanton Garbage Service, which is a bit cringe-worthy knowing that these fees will eventually be passed along to ratepayers. Staff basically said more research and an estimate of costs are needed to move forward.

Century House has been closed to the public for eight years. Not only are residents losing the opportunity to use the facility, the property continues to deteriorate. 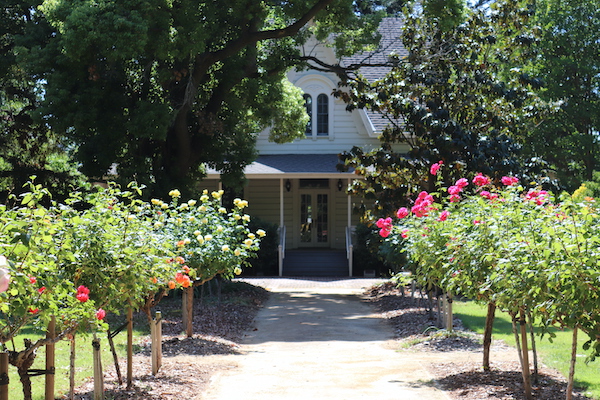 The $1.7 million recommended by staff for the project, which would not touch the reserves, would have repaired the roof and stopped the wood rot on the 150-year-old building to slow the deterioration. But, according to outgoing Interim City Manager Brian Dolan, that work would probably need to be redone.

To reopen the Century House to the public, much more is necessary, “You’d have to wait until you have the full amount to do what needs to be done,” Dolan said.

What needs to be done includes foundation work, a new roof, electrical and plumbing and building ADA restrooms, at a cost of $4.7 million. This estimate is several years old and doesn’t include some items, like parking, so bids will probably come in higher.

Arkin asked about moving 1%, or roughly $1.2 million, from the reserve to reduce the fund to under the maximum.

“We are staring down at a recession, there is no doubt about that,” Shah continued, adding that there’s another surge of COVID and military conflicts and threats. “At this point I do not feel (30%) is excessive.”

The plan for the $7.6 million rainy day fund is to transfer $2.5 million to the general fund for capital improvements every year for three years in the future, when things are back to as normal as they can be.

Since the fund is going to be at zero in a few years, it should not be included in the reserve total. Without the rainy day money in the equation, the projected general fund reserve balance is 24.3% of operating costs, below the recommended target of 25%.

Going against the recommendation of the city staff and dismissing concerns of council members Jack Balch and Kathy Narum, the council majority voted to move $2 million out of the rainy day fund and put it – and $1 million redirected from the skatepark project – to fully fund the $4.7 million necessary to reopen Century House.

This is the same council majority that earlier this year voted in a lesser district election map that split a neighborhood in two and split two sitting council members into different districts. The Weekly’s editorial board speculated then that keeping Balch from running against Testa this November was behind that unpopular vote.

Century House is a city treasure and, as Brown said, “the community next door that used that facility” would like to have it available again. But with the bleak economic forecast, it is not fiscally responsible to take $2 million out of the rainy day fund for a non-necessity.

A vote Tuesday night will make the $2 million transfer official. If you agree this is not the right time, reach out to members of the council majority.

When Narum made one final attempt to explain the risk of taking money from reserves, Brown said she is “confident this economy is going to be pretty good for Pleasanton.”

She’s optimistic. Everyone else is grabbing umbrellas and heading to the hatches.

Nicki is a registered user.


The pandemic is OVER..Dr. Fauci said so, and that we are now in the epidemic phase.
And of course, we all know Dr. Fauci is NEVER WRONG!!???!??

Report Objectionable Content
Posted by Kevin, a resident of Castlewood,
on Jun 15, 2022 at 5:03 pm
Kevin is a registered user.


Totally agree - but your opinion piece was much longer than necessary. Got your point about a 3rd of the way through.

Report Objectionable Content
Posted by Jarred, a resident of Val Vista,
on Jun 17, 2022 at 6:43 am
Jarred is a registered user.


I support using the rainy day fun fund for projects that are necessary right now in Pleasanton.
The students of Donlon and the community that cradles the elementary school have been trying to protect what they love, Donlon Field, for 7 months now.
City Council needs to use funds to help protect the mental, emotional and physical health of the children and community by taking care of Donlon Field in place of PUSD who has negligently let Donlon Field turn into weeds, which is what the 750 students of Donlon Elementary had their Field Day on this year.
The fact that in 2004, both PUSD and the City used over $1 million in Taxpayer dollars to renovate Donlon Field for community use with soccer fields for the kids to use, but then PUSD refused to maintain the field and it became reduced to weeds needs to be amended ASAP.
There are a lot of voters and families in this area who will not support the 420 million school bond in Nov or vote for certain city council members or measures on the ballot unless City Council steps in and does the right thing. That includes adding more checks and balances to PUSD who has not equally taken care of Donlon Elementary like the rest of PUSD for decades now.

What it takes to become a teacher
By Monith Ilavarasan | 1 comment | 1,014 views