Are water rates in Palo Alto high? You bet. It’s not just that we charge a lot. Our tiers are also very steep. As a result, tree-friendly Palo Alto charges residents 30-50% more than neighboring cities to water our trees, even though we get our water from the same source. How does the tiering work?

If you are going to use only 5 CCF of water in a month (1), our rates are not so bad. Palo Alto charges $7.42/CCF on top of a $21 meter charge. We are at least in the ballpark of most other cities.

The main outlier is Truckee, which has a very high service charge. (That is the amount charged every month based on your meter size.)

Unfortunately, 5 CCF covers only indoor household use, if that, in many cases.

A summer watering month might be more like 20 CCF than 10 CCF for houses with lots of green landscaping. That picture looks similar. On the plus side, our rates do encourage us to save water and use drought-tolerant plants. But it seems wrong that we are charging 42% more than thirsty Los Angeles and 26% more than water-starved San Diego.

One thing I noticed about the rate structure for Los Angeles water is it has a much more generous tiering system than we do, one that supports rather than penalizes green landscaping. Their tiering is more generous in summer, and also more generous for larger yards that can accommodate more landscaping. Is that a gift to the wealthy? Or a gift to our local flora and fauna? Or both? 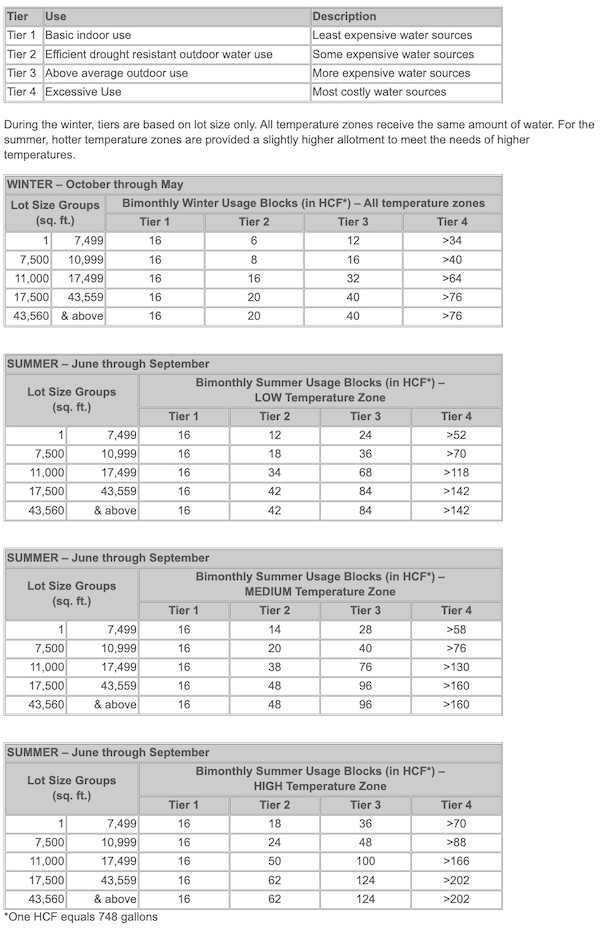 As one example of Los Angeles' tiered prices, if your yard is up to 7500 square feet, their lower-cost “Tier 2” pricing at $8.73/CCF allows 3 CCF for monthly watering most of the year, and anywhere from 6-9 CCF during the June-September months. This is on top of 8 CCF for indoor use at $7.52/CCF. In contrast, Palo Alto’s rates shoot right up to $10.96 after 6 CCF. It is pricey to water plants here.

The relative water costs look pretty much the same for a 40 CCF month, though that seems like a huge amount of water for a single household.

If you want to enjoy a water-heavy lifestyle, I recommend Mount Shasta. Or, interestingly, Palm Springs aka the desert. You can use 40 CCF there for about what it costs to use 10 CCF in Palo Alto. No, I don’t understand that either. Alternatively, water is essentially free in Truckee. It helps to be near the mountains!

In case you are wondering, water rates are high all over the Peninsula. It’s not just Palo Alto, and in fact San Francisco just edges us out. 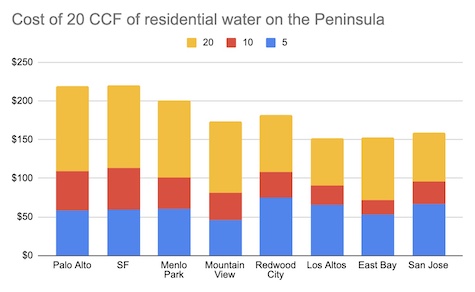 Menlo Park and Mountain View both get their water largely from Hetch Hetchy, as we do, but both provide some allocation for the yards in single-family homes. They allow for 12-15 CCF of water to single-family homes before charging their highest rate. Palo Alto, in contrast, allows only 6 CCF. As a result, Palo Alto charges 55% more than Mountain View ($10.96 vs $7.09 per CCF) for tree and other landscape irrigation, and 30% more than Menlo Park ($10.96 vs $8.40 per CCF). How is that consistent with Palo Alto's identity as a tree-friendly city?

I am surprised by just how much variation there is in water costs across the state, and by the fact that water is more expensive here than anywhere else I looked, even SoCal and the desert. I am also disappointed that Palo Alto seems to be the only local city that makes no allowance for landscaping. In contrast, I am impressed with the thought that Los Angeles has put into the cost of irrigation. Palo Alto should do better. I also hope that in the future we will have an option to water our landscape with more local, more plentiful, somewhat less pristine, and substantially less expensive water.

Notes and References
1. A CCF is a hundred cubic feet, which is about 748 gallons.

There is a terrible heatwave in Europe right now, and much of the Southern Plains and Texas have been baking in record-setting heat. It will just get worse until we act. And yet 51 US Senators are unwilling to pass legislation that would help us develop, adopt, and compete in low-emission technology.

Fortunately, there is an incredible amount happening locally, at the state level, and in all of your households and workplaces, and I am thrilled and grateful to be able to write about it!

Comment Guidelines
I hope that your contributions will be an important part of this blog. To keep the discussion productive, please adhere to these guidelines or your comment may be edited or removed.
- Avoid disrespectful, disparaging, snide, angry, or ad hominem comments.
- Stay fact-based and refer to reputable sources.
- Stay on topic.
- In general, maintain this as a welcoming space for all readers.

Jennifer is a registered user.


For less expensive water, you can pick up free recycled water if you live in Palo Alto. There's also Purple Pipe, even if there is a waiting list.

To save a little there is always effort involved.

Report Objectionable Content
Posted by David Coale, a resident of Barron Park,
on Jul 17, 2022 at 7:53 am
David Coale is a registered user.


Looking at the price of water alone is like a blind man holding the tail of an elephant, you are missing the larger picture. If you want to get the larger view of residential water usage, you need to look at the per capita usage in each city along with the climate in each city, housing density, water prices and water sources. Here is an article that puts some of this together: Web Link Perhaps your next posting can give us a better picture of residential water usage and answer some questions like do higher water prices really reduce water usage or is it something else?

Report Objectionable Content
Posted by CyberVoter, a resident of Atherton: other,
on Jul 17, 2022 at 9:13 am
CyberVoter is a registered user.


Sherry:
I applaud your data gathering & highlighting issues in our region. As stated, our water issue is both complex & probably the greatest threat. The cost of water can be a deterrent to excess usage, but the "mega-rich" in the area are not impacted economically. Several keys are to:
a) Insist that our State "Servants" (Berman & Becker) actually take action in building more water storage (we hav only destroyed & not built water storage for ~ 50 years)
b) Educate residents on landscaping, Grey Water, & other options to save water (Educate & not legislate)

Also, you would do us all a great favor IF you apply your data skills to comparing the local PG&E rates (Electricity & Natural Gas) to other localities. You will find the price comparisons per KWH & Therm to be shocking! Compare Menlo Park's PGE rates to:

Our residential prices are astronomical compared to other locations & the cost difference is totally based on CA's PUC & CA "Public Policy".


Report Objectionable Content
Posted by Mondoman, a resident of Green Acres,
on Jul 17, 2022 at 2:25 pm
Mondoman is a registered user.


As with so many other issues recently, Los Altos seems to be the home of no muss no fuss good governance :)

Los Angeles is also famously distant from the sources of water it uses (famous movies have been made about this!); is Hetch Hetchy really an expensive source compared to LA's or even local well farms?

Report Objectionable Content
Posted by Walter Sobchak, a resident of Menlo Park,
on Jul 17, 2022 at 6:58 pm
Walter Sobchak is a registered user.


Instead of building the amazing $100B “train to nowhere" in the Central Valley, I sure wish the state had built a few more water reservoirs in the past fifty years. We have twice the population as we had back in the mid-70s when the last one was finished.

Report Objectionable Content
Posted by Bob, a resident of Greenmeadow,
on Jul 18, 2022 at 10:59 am
Bob is a registered user.


It makes sense to me to have an extremely valuable commodity (water) that is decreasing in availability (drought) be priced so as to reduce its use. It doesn't appear that voluntary reduction requests have been successful.


These are great comments, thanks!

Before I address them, I want to just repeat that the thing that really bugs me about Palo Alto’s water rates is there is zero accommodation for green landscaping. If you look at Mountain View's water rates, Palo Alto’s are very similar to their rates for multi-family homes (i.e., homes without any need for irrigation). Both cap the low-cost tier at 6-7 CCF. But only Mountain View provides a significant allowance for landscaping at single-family homes. A single-family home in Mountain View gets 15 CCF of lower-cost water. A Palo Alto home gets 6 CCF, whether or not it has a yard.

Menlo Park’s rate structure is different but with similar effect. The city builds in a second tier that allows for lower-cost water for irrigation. Any Menlo Park home gets 12 CCF before jumping to the highest priced tier of water.

Why is Palo Alto’s water pricing so anti-planting, in what is supposed to be a tree-friendly and yard-friendly city? It’s perhaps no wonder that so many trees have died during the drought. It is pricey to water them, 55% more than Mountain View ($10.96 vs $7.09 per CCF) and 30% more than Menlo Park ($10.96 vs $8.40 per CCF). Yet all three cities get almost all of our water from Hetch Hetchy.

Maybe a better title for this post would have been "Tree-friendly Palo Alto charges 30-50% more to water trees." Dang.

Okay, I got that off my chest, now onto your comments…

@CyberVoter, you may be interested in this post that I did last year on electricity pricing. California’s prices are way too high and I am confident that something will change to better align prices with costs, make pricing more equitable, and encourage use of cheaper (e.g., midday) electricity. I may do a post on the possibility of real-time electricity prices soon.

@Mondoman, Los Altos has a pretty different source of water than Palo Alto, so I think Mountain View is the better apples-to-apples comparison here. So apologies for omitting that data from my blog post!

@Walter, I am rubbing my eyes in disbelief that you wrote an actually relevant comment. Now if only you would stop liking your own comment repeatedly, we’d be getting somewhere.

IMO, prices are policy, and California’s water prices are all over the map. So I agree with @Bob that we need better pricing for this precious commodity. Someone sent me an email saying that Vegas prices its water at $1.05 for the first 9 CCF, and $1.87 for the next 9. With their low service charge (around $14), it’s something like $40 for 18 CCF in the middle of the desert, compared to $197 in Palo Alto. Unbelievable.

I should clarify that the rates cited in this post are for 3/4-inch meters and single-family homes. Prices in some cases are somewhat different for multi-family homes, though often there is no distinction.

Finally, Palo Alto has done some thinking about distributing recycled water for irrigation. But it doesn’t seem to be intended for houses. Maybe as blocks go all-electric, we can repurpose those gas lines as conduit for recycled water. I can dream…

Anyway, thanks for the great comments.

Doing more with the natural spaces we have
By Sherry Listgarten | 8 comments | 2,931 views

The future of homework
By Monith Ilavarasan | 0 comments | 442 views