Celebrating a wedding and delighting in fall colors

Uploaded: Oct 13, 2022
We’ve spent the last week celebrating the marriage of our daughter Glenalyn to Solomon Joseph in Southern Utah.
The ceremony took place in a resort east of Zion National Park and was framed by multi-colored sandstone cliffs. Wonderful afternoon and evening. We drove out in a rented van because of all the homemade decorations and other wedding supplies Glenalyn and friends had made for the ceremony. Solomon is a native of Pakistan so the celebration mixed a traditional Pakistani ceremony with a Christian wedding the next day. Once we got beyond the California state line, gasoline dropped by $1.50 per gallon and went down again in Utah. We filled up Tuesday for $4.30 per gallon, a price that the locals there are hollering about, while we pleased compared to here. Once we hit the state line, it soared to $6 again.
We saw plenty of the rugged landscape that Utah is known for and frankly were surprised to learn that there were lines of people waiting45-60 minutes to get into Zion. No such issues Monday at Bryce Canyon, although parking at some viewpoints was so jammed that there were attendants in the lots. We drove over a nearly 10,000-foot pass to get to Cedar City where Solomon’s parents and sister live. The fall colors with the golden and yellow Aspen were spectacular and the cottonwoods held their own at lower elevations. We concluded it was the best Western color we had ever seen after fall trips to the Sierra, Colorado and Utah. Ironically, touring on Columbus Day was the same thing we’d done six years ago in New Hampshire and Maine for the Eastern fall colors—they were spectacular that year as well.
Driving over Tioga Pass to return through Yosemite National Park the aspens also were turning color—nice cap to our road trip. 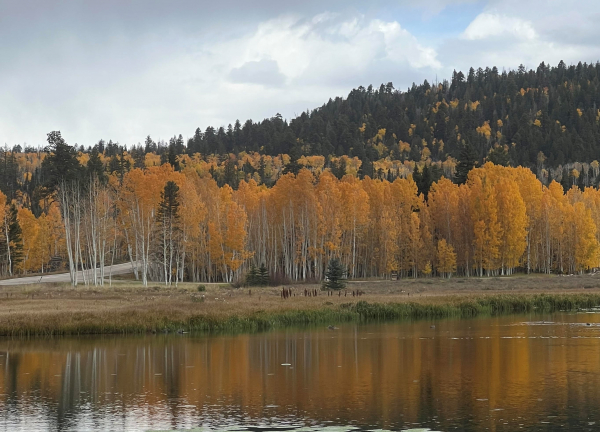 Decades ago, I was one of the regular listeners to KGO talk radio. My habits shifted in the 1990s, but it was notable to see the demise of its format. After being such a mainstay for so many years, Cumulus Media fiddled around with formats before shuttering the most recent one last week.
Instead, it’s launching The Spread, focused on sports betting. If either of the dueling propositions happens to win voter approval next month, there will be some built-in audience, but this seems like trying to slice off a narrow segment of the market. To be clear, I do not bet, although I recognize there are millions who do. Watching sports ranging from football to golf, the betting lines are integrated into almost every show. Two of the sports channels have daily wagering shows and personalities routinely are picking against the spread.
Presumably the “smart money” knows something I don’t. The PGA Tour leaders talk about the possibilities of real time betting on each shot in a tournament.

Jim is a registered user.

Report Objectionable Content
Posted by Arik Singh, a resident of Walnut Creek,
on Oct 15, 2022 at 1:53 pm
Arik Singh is a registered user.


What a beautiful site for a wedding!

Our gay son and his future husband are seeking a venue where they will not be ostracized and Zion National Park would be an ideal setting.

Being a historical frontier site, our son's future mate is trying to decide on his apparel...whether to wear just black leather chaps and a bolo tie or full western attire.

Report Objectionable Content
Posted by Jennifer, a resident of Danville,
on Oct 15, 2022 at 8:06 pm
Jennifer is a registered user.

Good for you, being a supportive parent. I'd say your son is blessed to have you both at his side. Hope you all have a GREAT time at the wedding!

Doing more with the natural spaces we have
By Sherry Listgarten | 7 comments | 2,704 views

The future of homework
By Monith Ilavarasan | 0 comments | 295 views