The City Council cancelled their regular Tuesday night meeting and instead held a Workshop on Creekside Memorial Park which is the cemetery planned for Tassajara Valley. This change was listed on the June 10, 2014 Agenda.

The intended audience for this "Informational" presentation came prepared ? very prepared. They even brought dinner, and set up a buffet table of Chinese food outside the Council Chambers. Most of the attendees are residents of Dougherty Valley. The map below shows the proximity of Windemere to the proposed cemetery marked with a red X. 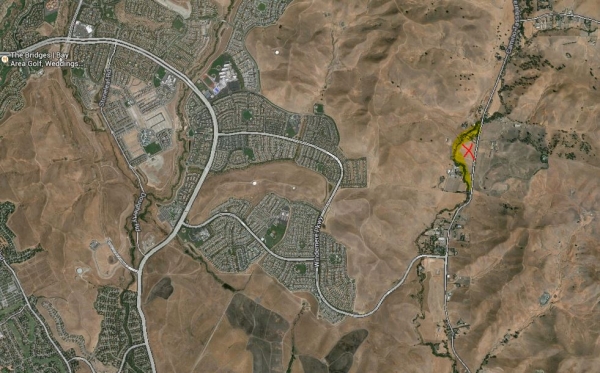 Mayor Bill Clarkson and Vice Mayor Phil O'Loane were on the dais, but since only two were present, they did not make a quorum. Clarkson said the other three Councilmembers were away, so they were holding this Informational Presentation instead. Clarkson told the crowd, which packed the Council Chambers to the walls, to fill out speaker cards if they wanted to speak or ask questions after the presentation.

The presentation took about ten minutes and it was pretty straight forward. I brought my copy of the original plans from 2005 that Sid Corrie gave me when I interviewed him back in 2010. The presentation covered what was in the plans. There have been changes, which Mayor Clarkson noted but not with many details.

I turned in my speaker card first, but after I saw how big and agitated the crowd was, I thought I should listen to what they had to say first. The Chambers seats 50 people. All of the seats were full and there were at least another 50 standing along the walls. About half of those inside submitted speaker cards. Up to another 100 people were still outside listening to the meeting over the loudspeakers.

I took notes and tried to get the names of the speakers, but I did not get them all or spell them correctly. The first 10 or 15 speakers said there would not be enough ground water for the landscaping and it would deplete the wells.

Water use is addressed in the the Final EIR. "Existing wells will be surveyed and tested and the data will be compared to the monitoring program. Only after the long-term testing is completed can the cemetery develop beyond the construction phase." But that information was not presented at the Workshop.

Michelle Ulrech owns a farm at 7101 Camino Ramon, which is directly across from the proposed cemetery. She has to haul water in for her livestock. She also said the traffic from funeral processions would make it dangerous for her to pull into the road. Ulrech's concerns make sense because she lives across the street, but most of the speakers were from Dougherty Valley and made no sense at all.

Their beautiful, peaceful, family life would be destroyed. San Ramon would be known as the city with the giant cemetery. Property values would go down. One resident even suggested suing Shapell for selling them a house without disclosing this monster cemetery a few miles away.

I have been following the development of this cemetery for four years. I first wrote about it in 2010 when the No on Measure W campaign was claiming, falsely, that Sid Corrie was planning to build 4000 houses in Tassajara Valley. Corrie abandoned those plans in 2005 and changed his plan to a cemetery instead.

In 2005 the San Ramon City Council was looking for a nearby location for a cemetery. The late Curt Kinney was instrumental in convincing Sid Corrie to use some of his property in Tassajara Valley to build a cemetery for the Tri-Valley.

Three years ago I interviewed Bill and Holly Newman, who live next door to the proposed cemetery. I looked around the Council Chambers and did not see the Newman's which surprised me. They came late and were outside with the overflow crowd.

The Newman's have legitimate concerns about the size and scope of the plans. They put up a website, Stop the Cemetery with a lot of factual information and links to articles, both pro and con, about it.

Holly Newman said she doesn't mind a cemetery there if it was reduced to a more reasonable size. That's an attitude that the rest of the people at the meeting should adopt.