The Genghis Chron, Part 2 of 3: Choices

As Genghis collie was reasonably comfortable, coping with his leg injury in the short run, we did not avail ourselves of unfamiliar emergency vet services that weekend. Puppy-Anne, who has adored him from her birth, stayed by his side in ways she never had before. Okay for now, but as my fiancée Sue and I cogitated before the Monday meeting with our vet, we needed a plan. 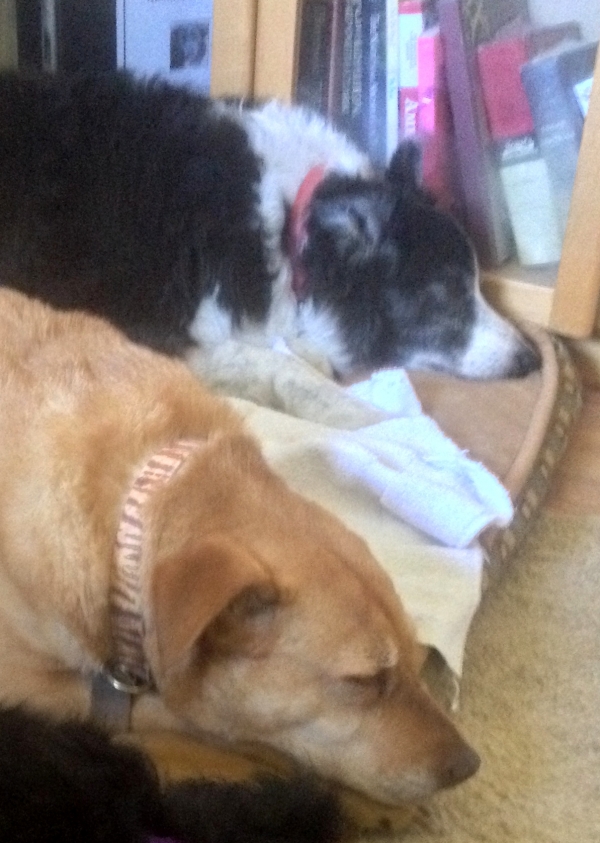 First and foremost, we determined that HIS interests and well-being needed to be our guide star. He is indeed one of Life's Great Dogs, but he Will die, join others on the mantel and be mourned and remembered fondly, forever (hell, I can still work-up a teary eyeful for the shep/lab blend 'Trover', my adult life's first great canine -- 25 years later). We needed to be alert to Genghis's needs -- not give primacy to our own interests in his company, and in postponing that painful reckoning. Border Collies are a pretty stoic bunch, but it's Not his job to suffer meaninglessly. And I had, after all, miss-gauged Nevada's condition in her final illness; he deserves better.

Our veterinarian has a unique wealth of wisdom and experience in her examining hands. She will massage the dog all over, give you clinical observations and diagnoses to a confidence level, and offer confirming tests. We've come to trust her hands on most things. Based on the swelling, she recommended x-rays on this limb, hoping it was just a bad sprain. They revealed, however, that Genghis had cracked his tibia at an angle across its width. Worse, there was probably cancer in the bone, and it may well have spread. She splinted the leg, but there was a pretty bleak set of prospects. Perhaps it was time to stop, she said. 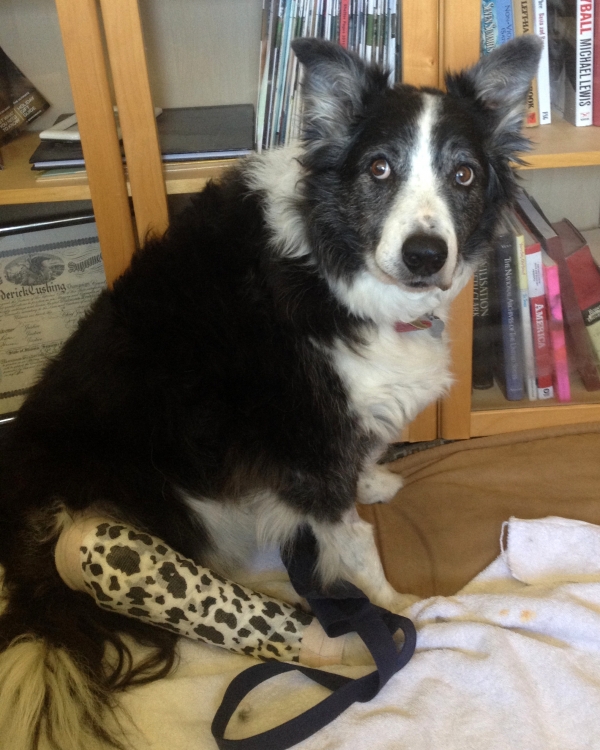 There is something about veterinarians. It's tempting to call it callousness, but that's terribly unfair. Our vet has empathetically helped us through countless routines and crises; she's spayed and neutered many of those foster dogs. Veterinary education, and all they've seen, has weeded-out much sentimentality. They also have to hold a certain level of detachment ? perhaps as a kind of defense mechanism. It may just be that, while they treat animals, they know full-well that the real client is the one who pays the bill. So, they have developed tones and phrases that make it easy and defensible for you to 'decide to stop.'

Stopping. Anyone who loves an older dog like Genghis has considered the existential questions with a mind's eye view of the terrible, merciful ritual of 'stopping.' In mine, we're at-home, surrounded by his loved ones and pack siblings ? even Tuxedo, with whom he has permanent, intractable canine disagreements. Wrapped in my arms, he will receive the drugs, gaze up in final trust, and listen to me soothe him as the light fades from his eyes, and he relaxes into the Great Beyond. That's what I want for him ? when he's ready to go.

But he's not ready. He is strong, alert, focused and every bit himself ? committed to task. We spent a very long time together on the floor over the next few days and nights. His eyes, his nuzzles, his steadfastness, his running in his sleep all led to the same conclusion ? this dog is not done living. This is a dog you fight for. But how? 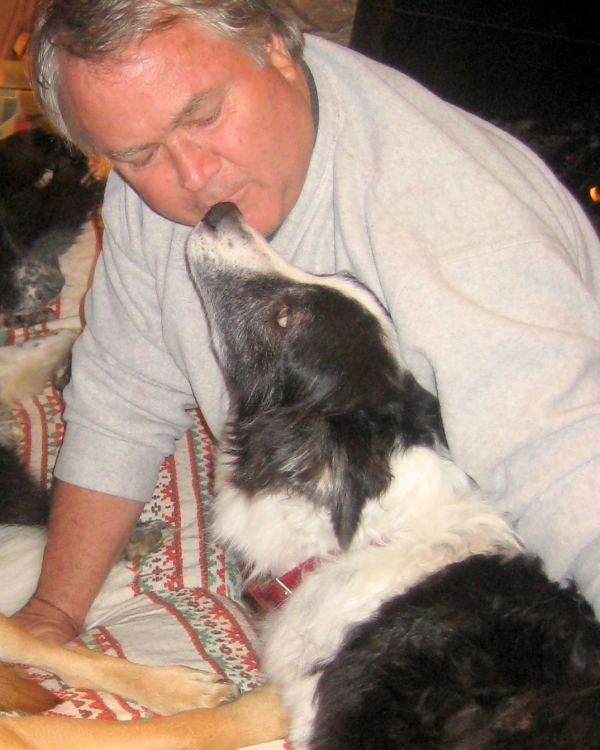 As we investigated, there is a range of options and each comes with a path, along with different definitions and probabilities of 'success' and duration, and a budget. Money is not unlimited; there's no Bo-Bamacare coverage. It's a decision thicket, but it can be organized: first as to mobility and then longevity. We checked-in regularly with our vet, who was supportive and seemed to gain enthusiasm for alternatives. The clock was ticking. Our process went something like this:

Do nothing. Having already decided to seek good alternatives to 'stopping,' this option offered only marginally better prospects than immediate euthanasia. A biopsy had revealed poorly differentiated cancer cells, a bad omen in lay terms, although chest x-rays did not reveal metastasis. Mobility is crucial, however, and BCs are notably restless. A life of hobbling on his bad rear leg with poor prospects that the broken one would heal would be painful, awkward and miserable. It violated our over-arching goal.

Amputation. For a younger dog with three good legs, this is often the best option. It arrests the tumor, obviously, and we had fostered a few tri-pods who got along fine. His age and lame left rear leg, however, suggested this choice alone would not work for our boy. Prying himself up from a prone position ?something he does probably fifty times per day, is a particular concern.

Amputation +. Could we provide a mobility alternative? This choice sent us on an internet-fueled paper chase through evolving options of artificial enhancements. As to prosthetics, you can find videos of canines and others, padding around happily on mechanical limbs. They all depend, however, on a significant portion of lower leg for anchoring and stability. I was grateful for candid conversations with several artisans around the country, as we sought in vain to identify practical alternatives that would fit our case. A tibia break is just in the wrong place ? we couldn't make the engineering work.

Carts were next. Often employed for dogs with spinal trauma, there are many models and sizes from which to choose, including rentals and do-it-yourselfer designs. Genghis has always been a front-wheel-drive dog, so this option played to that strength. But we could not find a design that satisfied us that we could readily get him, an opinionated 50-pounder, into and out of the cart many times a day. He would also have to be lab-like in his ability to just hang-out, immobile, between outings. And that's not happening.

Plate surgery: Our vet put us in touch with a veterinary surgeon, for both the amputation option and to see if there might be a way to shore-up that leg internally. He invested a long time with us. It seems likely that part of that time was him deciding whether he could get comfortable with our motivations.

He started the conversation quite negative in terms of the possibilities, and gave us excellent advice in general. It is virtually certain, he said, that the cancer has spread from his leg bone already, even though it has not been detected elsewhere. Further, there's a bell-curve of outcomes denominated by time ? from a month-or-two to less than two years. That is a useful organizing image ? the curve's size and shape, as well as the fact that our boy has his own point on the mortality distribution (as do we all). We also now know what will likely 'get' him, in the end ? the question no one can answer is: which point, or how long?

It was pretty clear that Genghis was robust enough to tolerate the anesthesia and the procedure. Our discussion eventually arrived at the issue of whether the broken bone would tolerate and support any reinforcing, on either or both sides. The Doc's physical examination and review of the x-rays suggested that it could. That process, combined with a course of canine chemo*, just might work.

Finally, there's an option that does not dead-end on us!

It's important to add here that Genghis had not been sitting still through all this. The lightly splinted leg was not supposed to be healing, and yet something was happening. He put weight on it ? indeed he resumed peeing from either side. We would sling-up his back-end to get him on his feet, and he'd work with you if you put a hand behind his head to help him cantilever his front half and pry himself up. He did not have a lot of patience for walking in the sling, but he consented to some hands-on help involving his 'reverse' gear, and the steps-up in and out of the house. He was working it, living life such as it was ? a further consistent indication of his vitality. 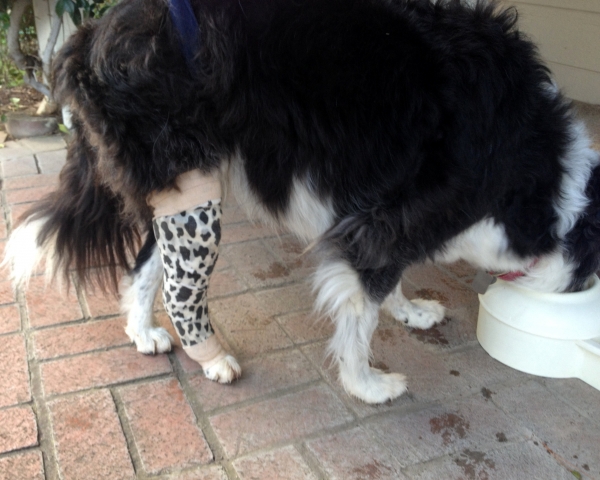 It also helped ? both our credibility with the doc and our peace-of-mind -- that a friend from the dog park is on-staff at the vet surgery center. We scheduled the surgery for the next week, upon delivery of his new hardware.

* that there even IS such a thing as canine chemo is remarkable ? in terms of both the science and the demand for it, as companion animals have assumed full family credentials in many households.