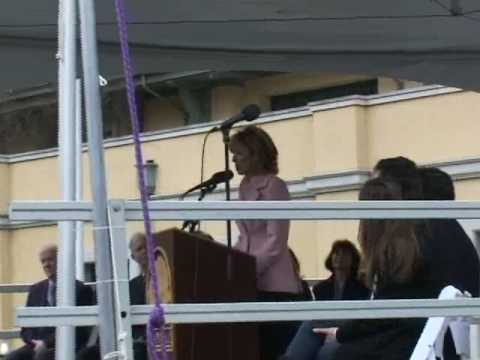 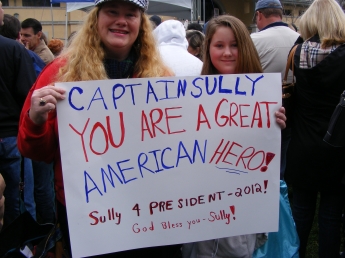 Alamo resident Susan Fleming and her daughter Laura, 12, display the sign they made to show their admiration for and appreciation of Capt. Sullenberger. Photo by Geoff Gillette

I knew it was just a matter of time when a politician would find a way to politicize the heroism of US Air Captain Sullenberger. Like millions of Americans I tuned into Saturday's live television coverage of the Danville Hometown Ceremonies honoring their most famous resident, Captain Sullenberger. The Master of Ceremonies was Mayor Newell Arnerich a Democrat. The tragic accident occurred on January 18, 2009. President Bush while still our President called Captain Sullenberger to offer his congratulations. Yet, mysteriously there was no mention of President Bush in the Proclamation read by Mayor Arnerich. Curiously, there was the mention and inclusion of President Obama. The omission of President Bush was intentional and political. The Mayor and the City Council should be ashamed of themselves. To politicize this event is a disgrace and brings great shame on their town.

Shame on you!
Hopefully no one else will respond to your attempt to make this another one of YOUR forums for more your old divisive republican rhetoric. Last I checked a new movement is in town, maybe try a unified approach. Sorry your old boss & party is out of the office.

What many readers may not realize what made Sully's skill such a unique and herculian accomplishment was the fact that the aircraft, with both engines out is like trying to fly a bathtub. The commercial jet had becom a simple "glider". The only way to maintain any response over the air control-surfaces (the wings and tail) was to maintain a steady and rapid decent of the aircraft. Sully's training would have had him, by second nature, noting alternate landing zones the moment after takeoff. What is noteable is the experience Sully demonstrated by ditching the plane with the rear of the fuselage making first contact with the water to instantly bleed-off as much airspeed as possible (a fraction of a second) before the wings with the heavy engines crashed downward. While the engines are somewhat aero dynamic they are not water dynamic and could have torn both wings off at any greater speed than Sullyy put it down at, creating a body count instead of a live-soul passenger manifest.

I have known the Sullenberger family for years. Knowing Sully, the overwhelming attention for his heroics is not his cup-of-chowder. He is a mild-mannered, soft spoken man, yet "sharp as an arrow in a pile of glass". His intuition surfaced in the wake of years of ambition. It was comforting to see Lorrie describing to the world what she has known about Sully all along. Only one question remains: "Did U.S. Air charge the passengers for a boat ride on top of the airfare?"

Here is a poem sent by Garry Souders, a resident from Oklahoma. Really shows how Sully has put Danville on the map! Enjoy!

Boats from all over the place
Running to help, joining the race
Passengers brave, crewman smart
All out the windows with pounding heart

The Germans join us in honoring our world hero. Visit:

I understand the controversy over financial concerns, but I am glad that we had the joy of honoring a hometown hero. Kudos to all who contributed on such short notice. Thank you, Captain Sullenberger for bringing positive national coverage to Danville.