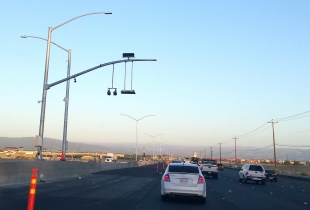 A view of westbound Interstate 580 on the approach to Pleasanton amid construction of the new express toll lanes. The project, which was set to be completed this fall, has been delayed, with a new opening date of early 2016, weather permitting. (Photo courtesy of Alameda County Transportation Commission)

Does anyone know what the orange mesh fences are for along the 680 corridor on both sides?

I read that the orange fences were placed along the highway to protect the environment during construction.

My question is, how will the toll lane help with traffic when at peak commute today the carpool lane is stopped? Paying a toll isn't going to help clear the carpool lane.

Basically, there will be no additional help during rush hour. However, it is a great way to fund projects, activities and salaries which we may or may not agree with or have a chance to vote on for approval. I never see notifications on exactly what the tolls that we are paying are used for? Some where we have lost the concept of FREEWAYS.

Where is President Eisenhower, when we need him most!

Report Objectionable Content
Email Town Square Moderator
7 people like this
Posted by Resident
a resident of San Ramon
on Sep 28, 2015 at 9:00 am

I love that they're spending 50 or so million on the project and Assemblywoman Catharine Baker was quoted as saying she "hopes" it works. That's a lot of money to hope something happens. My personal guess is it wont make a bit of a difference. When the HOV lanes are full today, then throwing more cars on them tomorrow doesn't add up to me. But, I HOPE it works.

Has there been any consideration on how a toll lane might impact San Ramon Valley & Danville Blvd. currently commuters jump off the freeway at congestion points and divert them by taking local streets. If, as the article states, non toll lane traffic increased by 15-22% AND locals avoid the freeway because of congestion & tolls, won't this further impact the roads running parallel to the freeway? Where's the impact report on that????

Report Objectionable Content
Email Town Square Moderator
3 people like this
Posted by Resident
a resident of San Ramon
on Sep 28, 2015 at 7:54 pm

This is a pork project to keep that keeps the bureaucracies busy and able to say they are doing "something", but the concept of tool lanes is fatally flawed and will not make any significant difference to the impending gridlock. All this amounts to is charging for use of lanes your taxes already paid for.

Our tax dollars already paid for the freeway, how in hell I have to pay more for a commute lane that is already clogged, sounds like politician project to me

What were the labor and material costs for the orange mesh fencing alongside I-680? What purpose could the fence possibly have and are the materials recycled once they are removed?

You Can Help: Scents and Migraines
By Chandrama Anderson | 0 comments | 1,529 views