District counters union proposal with offer of smaller raise and bonus, plus other incentives 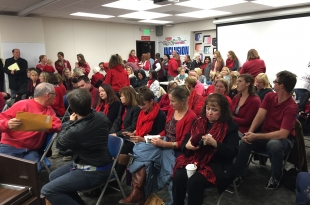 Dozens of SRVUSD teachers crowded the school board meeting Tuesday to support their union, which is amid contract talks with the district. (Photo by Jeremy Walsh)

The superintendent sent an email to all staff stating that they countered with a 9.44% raise. Teachers will not see 9.44%, give me a break. It's like going to Macy's when something is on sale for 25% off. Then you apply a 20% off coupon, and then get a 15% clearance discount. You don't add 25+20+15 to get 60% off, it doesn't work that way. The truth is, 2/3 of all admins have either retired or left the district since MS came aboard. Morale is low, admins do not support teachers, and jobs are unfilled. Our kids suffer. Plus, the districts invisible "no discipline" policy is frustrating to teachers. It's like a cop who arrests the bank robber and he is set free by the judge.

What is the "no discipline" policy? I'm a District parent, curious to know what this is.

Report Objectionable Content
Email Town Square Moderator
5 people like this
Posted by Teacher
a resident of Alamo
on Dec 21, 2015 at 5:48 pm

It stems from reducing the amount of maximum days a student can be suspended to ten per year, once they reach ten, they are untouchable and cannot be suspended further. In addition, students cannot be disciplined for willful disruption . So, teachers are fed up and just deal with it themselves, no administrative support. Students no longer fear administration. We call them "Mary's Kids"and turn a blind eye.

Report Objectionable Content
Email Town Square Moderator
2 people like this
Posted by Curious
a resident of Danville
on Dec 21, 2015 at 6:14 pm

That's unbelievable. I'm so sorry teachers have to deal w/that.

Report Objectionable Content
Email Town Square Moderator
3 people like this
Posted by Teacher
a resident of Danville
on Dec 21, 2015 at 8:15 pm

I feel that the attitude of students being disciplined is lack of respect for authority because they know that nothing is really going to happen to them. They would love to be suspended and go home. No matter what they do they will be passed along. Where do the students learn respect? Is there a partnership with the home and school to instill this? I wonder what the next generation will be like.

I think that's its sad that there is a total lock of discipline at schools. No respect of any authority. I try had with my kids at home, but they pick so many good and BAD things at school. I have seen kids just talk back to parents in a school setting. Went on a school trip and kids were out of control. Teacher just stand there and parents are too busy talking to themselves. I am not sure if the teachers don't want to say anything cause the parents are there or they just don't care. And I guess that parents think it's ok, which is not.

Report Objectionable Content
Email Town Square Moderator
5 people like this
Posted by Sharon
a resident of San Ramon
on Dec 22, 2015 at 2:41 pm

The real issue behind this is not the salaries. Rather it is the superintendent, an issue which has been simmering for several years. She comes across as cold and unapproachable. She has also been a tool for the school board since her first day on the job. Talk to people who work around her. If they are not afraid, of which many are, they will confirm what I am saying and what so many know to be true.

You Can Help: Scents and Migraines
By Chandrama Anderson | 0 comments | 1,478 views