Danville boy urges diabetes awareness with 'Get the Flock Out of Here!' | News | DanvilleSanRamon.com |

Danville boy urges diabetes awareness with 'Get the Flock Out of Here!' 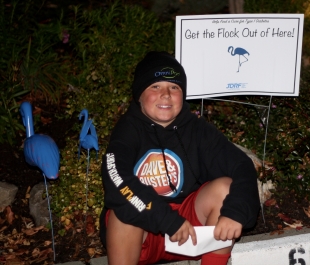 Wyatt French, 11, was diagnosed with Type 1 diabetes at 5. After continuously answering the same questions for six years, he has created his own initiative: "Get The Flock Out Of Here!" It is meant to raise money for juvenile diabetes research as well as inform others of the realities of suffering from the disease -- all with the help of plastic blue flamingos. (Photo by Kalama Hines)

Editor's note: Kalama Hines is a freelance writer for DanvilleSanRamon.com.

You Can Help: Scents and Migraines
By Chandrama Anderson | 0 comments | 1,691 views