Role Model recipient reflects on drive to raise money for Children's Hospital amid own battles with cancer, MS 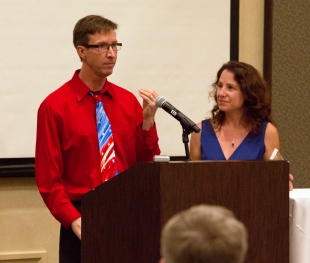 Arlie Smith accepts his Tri-Valley Hero Role Model award during a ceremony in Pleasanton last month. Smith, who is battling terminal cancer and multiple sclerosis, stood with his wife Shari and shared a few words about the community members who support him when he works as a Costco greeter. (Photo by Mike Sedlak/MIKE@DIGITALSIGHT.COM)

You Can Help: Scents and Migraines
By Chandrama Anderson | 0 comments | 1,372 views