Residents lauded for positive impact on community around them 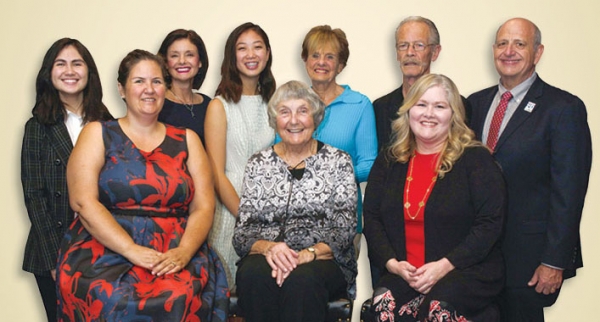 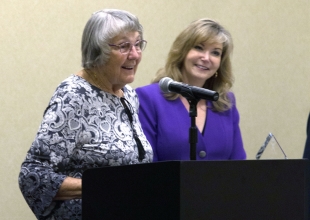 Dolores Bengtson speaks to the audience after receiving the Lifetime Achievement award for her decades of public service to the community, especially for spreading her passion for the outdoors throughout her career and into retirement. (Photo by Mike Sedlak)

Nine Tri-Valley residents have been recognized for their outstanding actions, achievements and strength of character as recipients of this year's Tri-Valley Heroes awards, presented by Embarcadero Media's East Bay Division, which includes the Pleasanton Weekly and DanvilleSanRamon.com.

The awards were handed out during the sixth annual Tri-Valley Heroes ceremony Oct. 23 at the DoubleTree by Hilton Hotel in Pleasanton.

Since 2012, the awards have singled out Tri-Valley residents and organizations who put in substantial effort improving their communities, the heroes all around us, said Gina Channell, East Bay Division president and publisher.

"We look around us every day and see heroes who deserve recognition," Channell told the audience in the hotel banquet room Monday evening.

"Our staff decided to create a program to recognize those individuals, groups and organizations that stand out because of their actions, integrity and honor, whether that hero is someone who gives his life to save another, the young man with a debilitating condition who talks to young people about self-image and loving life, or the mother-daughter team that plants a garden to give fresh produce to the local food pantry," she added.

Award recipients were nominated by community members, and recognitions were given across eight categories.

Award recipients expressed humble gratitude to be included in the Heroes group.

"Thank you for a great honor that really validates the importance of community spirit," Kenniston-Lee said in her acceptance remarks. She and co-chair Alpert were honored for their work throwing the year-long celebration of San Ramon's 150th anniversary.

About 125 family, friends and local dignitaries were on hand to support the award recipients.

Proctor, who turned 82 that Friday, had a whole cheering section, some carrying signs reading "Way to go GG!" (GG is short for "Gorgeous Granny," a nickname given to her by second-graders she reads to as part of the Pleasanton Library's Booklegger program.) The kids made a tunnel with their arms -- soccer team style -- for Proctor to walk through after accepting her award.

"Those of you who volunteer know the wonderful feeling you have when you give a small part of your day to brighten up someone else's day," Proctor said. "Volunteering is really a gift that you give yourself."

"It's really wonderful to see our community helping one another," Baker told the audience in remarks to kick off the presentation. "Tonight is great to sit around the table and visit and honor those who give us a little extra spark every day and help make our community better."

"I can only hope that in some small way, my advocacy for trails, parks and open space through my career and volunteer efforts, will have resulted in many people enriching their lives through natural world experiences, while contributing to support that world's preservation," Bengtson said in accepting the Lifetime Achievement award in recognition of her longtime dedication to parks and recreation in Pleasanton.

Channell closed the ceremony with a surprise for her co-presenter, Pleasanton Weekly Editor Emeritus Jeb Bing.

Starting next year, the Community Spirit Award will be renamed the Tri-Valley Heroes Jeb Bing Community Spirit Award in honor of Bing, the Weekly's founding editor who retired from day-to-day duties earlier this year but remains involved with the news team and still spearheads the annual Pleasanton Weekly Holiday Fund, which kicks off next month.

Each 2017 Tri-Valley Hero was chosen for their exemplary community contributions, including the following accomplishments:

Winter is a fourth-generation Pleasantonian whose murals can be found throughout Pleasanton, Livermore, Dublin and San Ramon. A self-proclaimed "free spirit," Winter is an artist, designer and inventor responsible for creations like the Moon Scooter Paddleboard and the Zwirl spiral football and works of art that include building miniatures and pieces created from nails.

Winter has worked in a dozen museums, including the Museum of Modern Art in New York, Ripley's Believe It Or Not! Museum in Florida and the Ronald Reagan Presidential Library and Museum in Simi Valley.

He recently created heart-shaped pins he hopes will help people heal from recent stressful events and to combat negativity and hate. His goal is to get a million heart pins out across the country to remind wearers to "think from the heart."

As the volunteer co-chairs of San Ramon 150, Alpert and Kenniston-Lee have spent countless volunteer hours creating the year-long celebration of San Ramon's sesquicentennial.

Starting with fundraising, establishing partnerships and recruiting a large base of other volunteers, Alpert and Kenniston-Lee coordinated and promoted the program that included a lecture series, a "birthday party" for residents with attractions for all ages, an exhibit about the history of San Ramon at the San Ramon Valley Museum and a multi-cultural event.

Each is also active in the community beyond San Ramon 150.

When Coomber developed bone density problems in the early 1990s due to complications from juvenile diabetes, he found himself confined to a wheelchair. But this bump in the road proved to be no confine, and didn't stop him from pursuing his lifelong love of hiking.

"Four-Wheel Bob" -- as he is affectionately nicknamed -- estimates that he has logged thousands of miles in his wheelchair, traversing everything from smooth park paths to rocky mountain passes throughout California.

Coomber was the first person in a wheelchair to reach the summits of Mount Diablo, Mission Peak and White Mountain, and he was the subject of a documentary titled "4 Wheel Bob" released earlier this year.

A member of the California Outdoors Hall of Fame and recipient of the George W. Bush President's Council on Physical Fitness Community Leadership Award, he now leads "adventure" hikes for the East Bay Regional Park District, in addition to serving on the Livermore City Council.

Coomber was unable to attend Monday's ceremony due to a City Council meeting, so his wife Gina accepted the award on his behalf.

Buck, a former Naval officer with experience in recycling programs, became concerned in the early 2000s about the amount of waste generated at her children's schools and the use of unsafe pesticides near playgrounds in the community.

So she introduced an environmental education and stewardship program, Go Green Initiative, to her daughter's Pleasanton school. The Go Green Initiative now reaches all 50 states and 73 countries, with more than 1.5 million students and teachers currently in registered Go Green schools.

Last year she introduced another program in Pleasanton schools: Local Leaders of the 21st Century Club, which pairs high-schoolers with community leaders to allow young people to increase their environmental consciousness and affect change through policy change and mindset.

Steele, a senior at San Ramon Valley High School, created a smartphone app last year that could save a life.

"Allergy Blast" allows an individual to set up a profile with critical health, allergy and medication information that can be shared easily and quickly; Steele hopes it can be of use particularly for children, seniors and people with special needs.

The app was inspired by her own nut allergy and her mother's meticulous notification system -- creating an information sheet, card or post-it note for every overnight or outing where she could come into contact with the allergen.

Foothill High School sophomore Wang continues to look for ways to help the young, the elderly, the ill and the four-legged.

Inspired by her late cousin who died from a heart defect, Wang established the This Side Up Foundation to raise funds for Donor Network West, a San Ramon nonprofit that facilitates organ and tissue donations, through selling specially designed t-shirts and hosting CPR and first-aid classes.

She also plays piano at the Sunol Creek Memory Care Center, is a volunteer aid for elementary and middle school students at Spectrum of Science, and bakes dog treats to raise funds for Coppers Dream Animal Rescue.

Proctor touches the lives of people of all ages through her volunteer work.

She is a Booklegger for the Pleasanton Public Library, now visiting six to 12 classrooms per semester to promote independent reading among elementary and middle school-age children.

Proctor also provides child care for mothers at Tri-Valley Haven and Shepard's Gate women's shelters, and she is a dedicated Meals on Wheels driver, providing meals and companionship to local seniors, checking on their welfare and helping them to continue to participate in the community.

Bengtson has lived a life of public service for her entire life, in particular sharing her passion for the outdoors throughout her career and into retirement. She began working for the city of Pleasanton as a swim instructor, eventually becoming head of the swimming programs at the aquatic center that now bears her name.

After becoming the director of the city's parks and recreation program in 1979, Bengtson developed the policy of planning neighborhood parks within a half-mile of most residences as well as larger community parks to serve everyone. A literal "trail-blazer," she gained permission to open up nearby trails and continues to serve as a trail advocate and guide.

She is also an expert gardener with the Livermore-Amador Garden Club and serves on the Alameda County Agricultural Advisory Committee. And for the past 10 years, she has served on the Kottinger Place Redevelopment Task Force and the board for Pleasanton Gardens, looking for ways to provide more affordable housing for those who wish to "age in place" in Pleasanton.

When she's not blazing trails and being a community advocate in the Tri-Valley, Bengtson has volunteered for six-week intervals at a preschool and orphanage in Tanzania.

Profiles on each award recipient will run as a series in the Pleasanton Weekly and online at PleasantonWeekly.com and DanvilleSanRamon.com beginning next week.

Repairing a Disagreement with your Beloved & “Physical” vs. “Social” Distancing
By Chandrama Anderson | 0 comments | 1,559 views