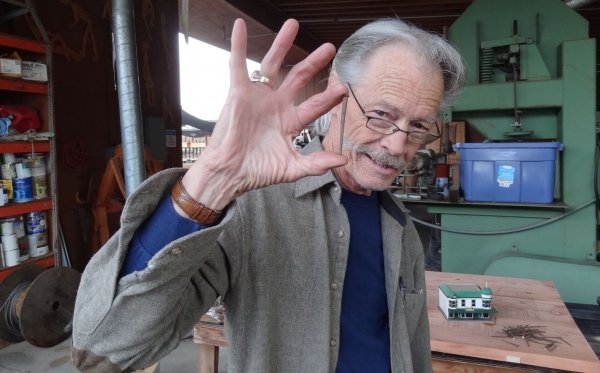 Artist Gary Winter displays one of the antique square nails found during renovations at the Kolln Hardware building on Main Street, nails he used to create an image of the iconic Pleasanton building. (Weekly file photo) 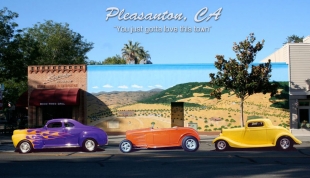 Downtown mural by Gary Winter reflects his love of Pleasanton, which he traces back 100 years to when his great-grandfather rode into town on horseback. (Photo courtesy of Winter)

Gary Winter has his work in more Pleasanton homes than any other artist. He is the creator of the town's miniatures -- landmark buildings, businesses and homes, and the beloved Main Street arch.

Perhaps just as importantly, Winter brings his energy downtown every day, where he finds inspiration on ways to convey his message: Acknowledge your heart.

His mother and his father taught him to think from his heart, said Winter, 70, who was the oldest of four.

"My mother used to always say, 'Gary, if you want to be a good artisan, pay attention to your heartfelt thought,'" Winter said. "That's where intuition and inspiration comes from. Not your mind, your heart."

His father inadvertently introduced him to nail art when he was 6 or 7 years old.

"My dad was always in the garage and would show me how to use hand tools," Winter remembered. "One day I was bugging him, I guess, so he picked up a small bag of nails, plopped it in front of me with a hammer and pointed to some pieces of wood. He said, 'Go over there and use your imagination.' I did a little tiny oak tree, about 6 or 7 inches square."

Winter went on to create nail art that is now on display in the Ronald Reagan Presidential Library and Museum in Simi Valley, and in Ripley's Believe It Or Not! museum in Florida, among others.

He and his brothers were always creative. After their dad challenged them to find a use for a printing press' enormous discarded tubes that had held rolls of paper, they developed a line of tubular furniture. They made drum chairs for children, circle shelves and side tables for beds.

"Water beds had just come out and I made a 'wave' headboard," Winter said. "It was my favorite design."

They branched out into display systems, which they sold to Lord & Taylor, Neiman Marcus, Macy's, Sears and JC Penney.

As a young man, Winter worked on the family ranch and considered himself a cowboy until he wandered into Pleasanton one day and began to envision the first caricature map of the city, with playful drawings marking shops and landmarks.

"I had seen caricature maps done before but mostly on the East Coast," Winter said.

He attended Chamber of Commerce meetings to promote the maps and was introduced: "This is Gary Winter. He's an artist." He decided it was a fit.

Winter worked with his brother Ben for four years to perfect the ridges of the Zwirl football to make it ergonomic and aerodynamic. Around this time, Blackhawk was being developed and Winter moved with his young family into the 10,000-square-foot Blackhawk ranch house, where he was caretaker -- plus had an entire wing for his art studio.

"We lived out there for seven years, it was incredible," he said.

For the last few years, Winter has been making stick figures from 2-by-4s. He brings favorites to Saturday Farmers Markets where he sets up on Main Street and Angela. Sometimes he gets stick figure commissions.

"It's neat, I meet so many people and hear all their stories," he said.

It was Christmastime in the late '90s when Winter got the idea to create Kolln Hardware in miniature. This has led to more than 120 little buildings, with their precise likenesses laminated onto pieces of wood that he cuts out.

"I have 800 collectors -- some have every building I did on Main Street," Winter said. "Some people started having me do their homes."

The arch was always a best seller and one day Winter was inspired to put it onto little magnets, a collectible more people could afford. He sold hundreds.

"Then one day I was taking my walk down Main Street, and I looked at the arch and thought, 'That is the heart of Pleasanton'" he recalled.

He designed tiny red hearts on sticks to add to the arches. He also began to make little gold pins with hearts to distribute as an antidote to the current negativity in the world.

Winter credits meditation, which he began in his 20s, for staying calm and centered.

"Our minds are so distracted and programmed -- throw the dragons out, imagine a better way, a better day," he said. "Acknowledge your heart."

* In high school, Gary Winter worked at his uncle's haberdashery in Fremont. He began on the register but soon was creating window displays.

* Winter joined the Navy right after high school and was stationed in Hawaii and Guam.

* Winter has been meditating for more than 45 years after attending a workshop by Werner Erhard, creator of EST. He advises: "Stop for a second, acknowledge your heart, take a deep breath and look around you and appreciate everything."

* His son just got married, and his daughter is expecting his first grandchild in March.

* Ask Winter how he is and he always responds, "Super duper!"

Repairing a Disagreement with your Beloved & “Physical” vs. “Social” Distancing
By Chandrama Anderson | 0 comments | 1,572 views