Keeping the beat at 80 | News | DanvilleSanRamon.com |

Keeping the beat at 80 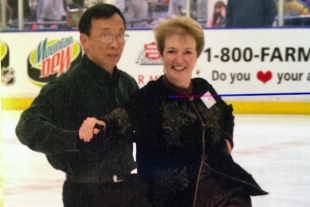 As a child in Taiwan, Yun Sun enjoyed gliding across the ice at local indoor rinks. In high school, he did gymnastics and played basketball but continued with the skating.

"I graduated from a university in Taiwan in chemical engineering and came to the States for advanced study," Sun, now 80, recalled. "During that time, I really liked ice skating so much."

Sun chose to attend University of Missouri for a reason that causes him to chuckle now: He had heard of the state because of the famous World War II battleship, the USS Missouri, which was sunk during the attack on Pearl Harbor.

"I didn't know very much about the States," he explained.

While Sun worked to earn his doctorate in chemical engineering, he continued to ice skate for fun. And it became his passion, he said.

The physical exertion appealed to him as did the mathematics.

"There is no limit," Sun said. "You have the inside edge of the skates, the outside edge, on the right and on the left. You have 16 combinations whenever you move."

He also discovered ice dancing with a partner, which appealed to him.

"Single is very tough," he said. "In ice dancing you have two people so the job is easier."

In 1973, Sun and a partner competed at the National Ice Dancing Competition in New York City and earned a bronze medal.

Sun moved to Michigan with Dow Chemical Co. after earning his Ph.D.

"It was a good company -- and there is lots of ice in Michigan," he said.

He and his wife had two sons, and when he retired from Dow in 1989 to do consulting, they wanted to move to the West Coast. Housing prices drew them to Folsom originally, but they were soon looking at the Bay Area.

"We ended up being off Foothill Road in Pleasanton, in a new house, 6,000 square feet," Sun said. "We were supposed to be downsizing but we ended up with that one."

The big house is full of life these days since their sons are investment bankers in Hong Kong and visit for long periods with their families. The older son had four children and the younger son has three.

Meanwhile the elder Suns have moved to Stoneridge Creek, where they enjoy socializing with their neighbors.

"Everybody here is very friendly," Yun Sun said. "People here will be our friends for the rest of our lives."

Even as he has aged, Sun hasn't missed a beat and he enjoys ballroom dancing. He especially likes Latin dancing, which he teaches twice a month at Stoneridge Creek. He also volunteered to hold classes for five years at the senior centers in Pleasanton, Dublin and San Ramon.

"Latin dancing is very versatile," Sun said. "There's a lot of movement and freedom, and you can practice alone or with a partner. But it definitely is a workout."

The health benefits of dancing for seniors range from the physical to making social connections. For that reason, Stoneridge Creek has eight dance classes a week, including line dancing, Zumba and ballroom dancing.

"Latin dancing is good exercise," Sun said. "Ballroom dancing is the waltz, tango and foxtrot. But Latin dancing is a little wild -- you might hold two hands together or one hand or no hands. There is more freedom to move your body, it is more exercise."

Latin dance is also good exercise for the mind, he explained.

"You move your body and get exercise but you also train your mind -- you have to listen to the beat," he said.

And dancing with a partner is also good training for the mind, he added, because communication is key.

But Sun still takes every opportunity to get back on the ice.

"Ice skating is still my passion," he said. "I do some recreational ice skating at the San Jose arena where I ice dance for two or three hours."

"Ice dancing taught me to be very disciplined," Sun noted. "But it also created a desire to always be active. That's why I volunteer to teach Latin dance -- it keeps me young."

There are no comments yet. Please share yours below.

Repairing a Disagreement with your Beloved & “Physical” vs. “Social” Distancing
By Chandrama Anderson | 0 comments | 1,582 views