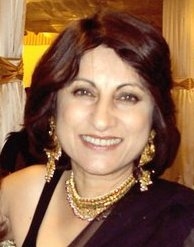 Anju Bhatia, a beloved wife and mother who lived by her faith daily, went home to her Heavenly Father on Easter Sunday morning after a 13-month battle with cancer. She was 57. During her memorial service on April 9 at Valley Community Church, her friends and family commented on her strong Christian faith and her beautiful ability to touch each person that she met. Her brother, Rajiv Makhija, said, "I never remember her complaining. Her faith saw her through."

The Rev. Bob Ferro said, "Anju prayed for God's will to be done." Her life was one of service to family and friends. One of her good friends, Judy Woo, called her "angel." Another sister in Christ said, "She wanted the glory of Christ to be reflected in her life." Indeed, many at the memorial service remarked upon the beauty and wonder of Anju getting baptized with her three children on Good Friday and being called home to heaven on Easter Sunday. Anju was born in Calcutta, India and moved to Hong Kong with her family during her school years. After completion of her GCE 'A' Level exams, she proceeded to the UK where she pursued her Honours Degree in Social Administration at the University of Sussex. Upon finishing her degree, Anju returned to Hong Kong and sat for the competitive examination for the Hong Kong Administrative Service. At age 23 she was made a Justice of the Peace. She had the distinction of being the first and only woman of Indian origin to ever be recruited to the administration. Anju and Tarun Bhatia were married in Hong Kong in October 1982. Anju offered to resign her position with the Hong Kong government as she and Tarun had plans to move to the U.S. Unwilling to lose Anju's services, the government appointed her as Hong Kong's Acting Assistant Commissioner for Trade from New York and shortly after she was made Honorary British Consul. Five years later when asked to return to Hong Kong, she relinquished her position to start a family. After raising her three children across Connecticut, Taiwan, and Pleasanton, where the family has resided for the last 15 years, Anju earned her Realtor designation and served clients within the Tri-Valley for several years. She was recognized with the Bayeast Association's Masters Award in 2012 and twice received the President's Award. In addition to working in real estate, she was an active volunteer of Home of Hope, a charity empowering disadvantaged and underprivileged youth in India. She also served as a member of the Rotary Club of Pleasanton. Anju was appointed as President of the Tri-Valley Indian Association shortly after moving to Pleasanton and also spent many years supporting her children's schools. She is survived by her husband of 33 years, Tarun of Pleasanton; her three children Sanam (Thakur) of Hong Kong, Mika, and Nikhil; her parents Bhim and Sarla Makhija of New Delhi, India; her brother Vineet Makhija of Sydney, Australia and her brother Rajiv Makhija of Hong Kong. Her youngest brother, Sanjay Makhija, passed away at age 21. She was buried in the Garden of Angels at Memory Gardens Cemetery in Livermore.

Photo Gallery
0 photos Upload a photo
Remembrances
1 entry Submit a remembrance
From Charlotte Poltpalingada
April 12, 2018
Many students want to become doctors. So, bestessay.com review services suggested them for doctoral research. Students can get experience from lab oriented research and can enhance their ...
Read more
Memorial service
The memorial service was held April 9, 2015 at Valley Community Church.
Make a donation
The family prefers contributions in her memory to Home of Hope, 190 Tobin Clark Drive, Hillsborough, CA 94010. www.hohinc.org.
About this site     Contact us