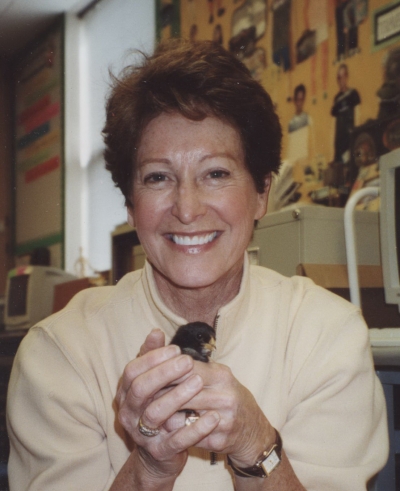 Succumbing to the effects of a valiant 25 month long battle with ALS, Ann Elizabeth Kyle passed away quietly at home with her husband Michael at her side on Sunday, April 26, 2015. During the entire ordeal she never lost her ability to smile and enjoy the presence of both family and her many friends who visited. She will be greatly missed by all who knew her.

She is survived by Michael, her two sisters, Kay Doan and Linda Haderer (Paul Haderer); sister-in-law Susan Schwerin, and nephew Kyle Schwerin and niece Kelly Schwerin; nieces Carrie Doan Higgins, and Amy Doan Mason (Michael Mason), and grand-nieces Erin Higgins and Miranda Mason; and nephew Nicholas Haderer (Chelsea Haderer), and grand-nephews Nathaniel and Liam Haderer. Ann was born to Robert and Alice Wilson in Washington, D.C. She was the second of three daughters. She spent her early years on the east coast. When she was junior high age she moved with the Wilson family to Stuttgart, Germany. Ann's father was a Director with the American Red Cross assigned to the European headquarters. Ann's father was then transferred to the San Francisco Red Cross office, and the family returned to the US locating in Burlingame, CA.

Ann attended high school in Burlingame, and then entered San Mateo Junior college. She enrolled at UC Davis in the fall of 1964, and graduated in 1966 with a degree in English. She attended one more year and obtained her teaching credential. It was in her third year at Davis that she and her husband, Michael, met and began dating. He was attending law school at the time. They were married on July 11, 1970.

Ann began her elementary teaching career near Davis in Dixon, CA. She then sought and was awarded an elementary position in Los Gatos CA. She taught there for three years before taking a position at Lydiksen School in Pleasanton, where she taught for forty wonderful and rewarding years, retiring in June, 2011.

Over the span of her career, Ann received the Golden Apple Award and the Excellence in Education Award, signifying her excellence in the classroom. She was respected by her fellow teachers, loved by her students, admired and appreciated by the parents of her students, and warmly regarded by all she encountered in a career characterized by dedication and hard work. One of her favorite programs was the science project where she and the other third grade teachers would provide fertilized chicken eggs and incubators for their classes. The eggs were carefully monitored by the teachers and students through the hatching of the chicks which brought great cheers and excitement for all. The chicks were then collected and displayed at the district Science Fair to everyone's delight. The project took a First Place ribbon several times.

During her life, she enjoyed many sports activities and kept herself in remarkably good condition. She was a longtime member of Club Sport in Pleasanton where she worked out regularly. She played ladies' softball, skied often with Michael, fly fished and golfed. And after her retirement, she continued her daily jogging and walking, her workouts at the club and hiked many bay area trails with her hiking club. With great determination she continued all these activities until she was physically unable to continue due to the effects of ALS.

The family is hosting "A Celebration of the Life of Ann Kyle" at 1 p.m. on Sunday, May 31, 2015, at the home and gardens of Susan Schwerin, located at 2708 Danville Blvd., Alamo, CA 94507. All friends, teachers, students and parents are invited. The family suggests that any donations in Ann's honor be made to the UCSF ALS Clinic, 400 Parnassus Avenue, San Francisco, California, 94143.