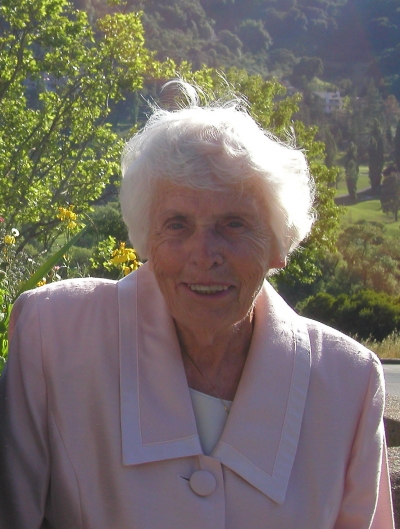 Nan Cohan passed peacefully on Saturday June 1st knowing she was cherished by her large family and countless friends. The devoted mother of two daughters and five sons, grandmother of twelve and great-grandmother of three, Nan was preceded in death by her husband Gene Cohan. She was a beloved mother-in-law, sister, aunt, niece, cousin and friend.

Nan, born Anne Marie Walsh, was raised in New York City. Both her parents were Irish immigrants - mother Sarah Ryan from County Kilkenny and father Michael Walsh from County Sligo. Nan and Gene married in Astoria, New York in 1947 then spent twenty years living around the world before settling in Pleasanton. Their children?s birth certificates show part of Nan and Gene?s global trek starting in New York then touching down in Territory of Hawaii, Japan, California and Kwajalein, Marshall Islands.

Admired for her spirit and soul, Nan was a valued co-worker, an extraordinary cook and a wonderful hostess. Each of her many homes became the place to be and she made everyone feel welcome and appreciated.

Arriving in the summer of 1967, Nan embraced Pleasanton as home. After many years working for the City, she will be remembered as a champion of services for seniors and those in need in the community at large. She supervised Pleasanton?s Senior Recreation program for over ten years and was instrumental in planning, developing and realizing Pleasanton?s Senior Center.

The ?Nan Cohan Volunteer of the Year? award has been given each year since 1994 by the City of Pleasanton Senior Center. The award recognizes a volunteer for outstanding efforts to serve the Center, its clients and the community. The award is named in recognition of Nan?s years of exceptional service to the City as an employee and as a volunteer for many organizations and causes.

In lieu of flowers the family requests donations be made in Nan?s name to: Wiesner Memorial Senior Fund 4444 East Avenue Livermore, CA 94550-5053

Forever treasured, Nan?s life will be celebrated on June 28, 2013 with Mass at St. Augustine Catholic Church at 10:30 AM, then burial at St. Augustine Cemetery. Nan?s family invites all of her friends to join us in this remembrance and at a Pleasanton gathering to follow.