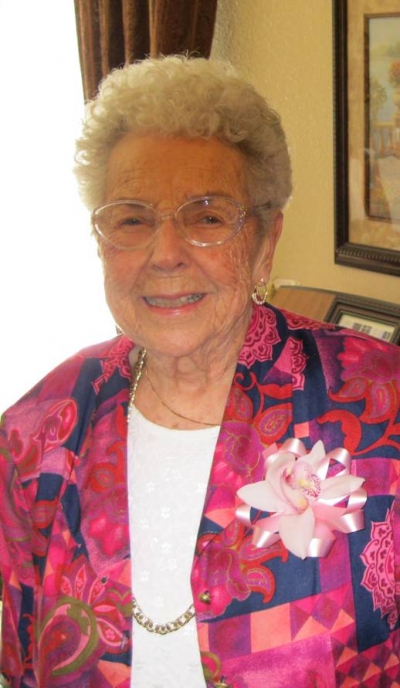 TRACY?Arline Mills, a long-time Pleasanton resident, died here at her daughter?s home on August 17, 2012. She was 90. Mrs. Mills moved to Pleasanton in 1952 with her husband, Frederick ?Ed? Mills, and they lived in the same home on East Angela Street for more than 55 years until Ed died in July 2008. The only child of Charles and Alice Clifford, she was born June 8, 1922 in Dunmore, PA. She graduated from Dunmore High. She was the valedictorian of both her 8th grade class and her high school class of 1942. She was active in Girl Scouts and achieved the organization?s highest honor, the Golden Eaglet Award. After moving to California, she was a leader and a trainer for 30 years with the Girl Scouts. While raising her children, she volunteered with the Amador Valley High School Parent-Teacher Association and was named an honorary life member in 1967. She was active with the PTA throughout her girls? education. She also was honored by Rainbow for her service and led a variety of charitable activities in Pleasanton. After graduating from high school, she attended and graduated from the Palmer School of Business in Scranton. She worked as a secretary in Scranton and, after relocating to Pleasanton, worked for 24 years as a church secretary at what is now Centerpointe Presbyterian Church. During her childhood, Ed lived a few houses down the street. He was six years her senior. They married on July 4, 1942 while he was on leave from the U.S. Army during World War II. After the war, they moved to California in 1950 because Ed?s profession as a surveyor was no fun during the harsh Pennsylvania winters. A couple of years later, Ed went to work for Lawrence Livermore National Laboratory and worked for nearly 30 years before retiring. They enjoyed a long life together in retirement, taking many cruises and vacations. Arline?s favorite cruises were in the Hawaiian Islands and Alaska. One of their favorite hobbies was square dancing. Their square dancing club refurbished the second floor of the barn on the Golden Eagle Ranch when it was owned by Walter S. Johnson. It?s now the gated Golden Eagle community. They also volunteered as docents at the Museum on Main. She was a long-time member of the Presbyterian Women. After moving to Tracy, she enjoyed lunch on Tuesdays and Wednesdays with friends. She is survived by her daughters, Charline Whitaker (David) of Stockton and Jerry Lynn Rocha (Danny) of Tracy, five grandchildren and four great-grandchildren. Burial will be next to her husband at the San Joaquin National Cemetery in Gustine.

Memorial service
A memorial service celebrating her life will be held at 2 p.m., Saturday, Sept. 15 at Centerpointe Church, 3410 Cornerstone Court, Pleasanton. A memorial service also will be celebrated in Tracy at 3 p.m. on Sunday, Sept. 9 at Fry Memorial Chapel, 550 South Central Avenue.
Make a donation
The family prefers contributions to Presbyterian Women Memorial Fund at Centerpointe Church, 3410 Cornerstone Court, Pleasanton, 94566.
About this site     Contact us