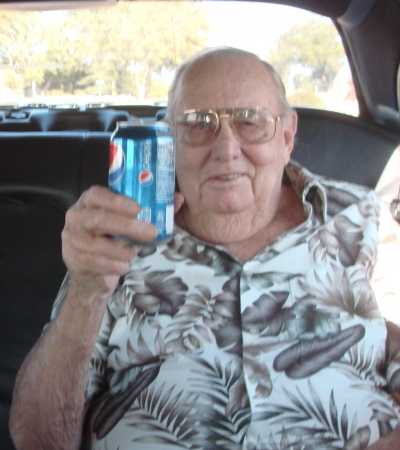 Arthur "Bud" Plato died peacefully, with his family by his side, on Sunday, June 19, 2016 at the age of 90. Bud was born on May 8, 1926 in San Rafael, California. He was a longtime Pleasanton resident and business owner.

After graduating from Amador High school, he enlisted in the Navy. Once his service was complete, he returned to Pleasanton, the city he loved and became very involved in the community. In the early 1950's, he was a member of the Pleasanton volunteer fire department. Other affiliations include the Lyons Club, Planning Commission and VFW.

Bud was well known as the owner of the American Cleaners, located in downtown Pleasanton, established in 1943 and prospering until his retirement in 1985.

He is survived by his wife of 52 years, Peggy Plato of Tracy, and 7 children: Paula Lucio of Tracy, Hap Plato of Tracy, Patty Vent of Salinas, Linda McCloud of Tracy, Lori Brandes of Pleasanton, Lynn Andrus of Arizona and Chip Plato of Manteca, as well as numerous grand children and great grandchildren.

Photo Gallery
0 photos Upload a photo
Remembrances
1 entry Submit a remembrance
From Skip Miller
July 27, 2016
Bud was very dear to my heart. I am sorry to see his passing. Bud was my first boss, at the cleaners sweeping floors. My prayers go out to Peggy and the family.
Memorial service
Visitation will be held from 9-11 a.m. on Tuesday, June 28 at Callaghan Chapel, 3833 East Ave., Livermore. Funeral procession will be departing immediately following to San Joaquin Valley National Cemetery.
Make a donation
In lieu of flowers, donations can be made to Chahta (Choctaw) Foundation, PO Box 1849, Durant, OK. 74702 - www.chahtafoundation.com
About this site     Contact us