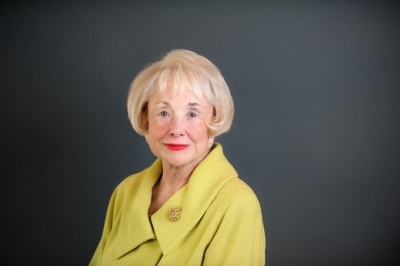 The building was named in her honor when it was dedicated in October 2010.

She was born and grew up in Livermore, attending St. Michael School and graduating from Livermore High School. She moved on to the University of California, Berkeley where she earned Bachelors of Arts and doctorate degree. She earned a master?s degree from San Francisco State University.

She joined the Chabot College Faculty in 1963 to teach English and Rhetoric. Barbara advanced to serve as the Dean of Arts and Sciences in 1970 and then became the founding Dean of what became Las Positas College in 1975. She served there for 11 years until moving to the district office as Vice Chancellor for Institutional Planning and Facilities development.

In that role, she wrote the master plans for both Las Positas and Chabot as well as writing competitive grant requests that resulted in more than $100 million outside of the regular budget allocations for the two campuses.

Barbara also reached out into the community to create partnerships between the colleges and businesses and public agencies to leverage resources and to improve the quality of instruction. For instance, she was instrumental in building a partnership between the college district, Lawrence Livermore National Laboratory and the Bay Area Rapid Transit District to train workers.

She was a well-respected participant in community college issues statewide.

After retiring in 2000, she was elected to the college district board of trustees and served for 14 years until her retirement last year.

Barbara and her late husband, David Mertes, PhD., both served in a variety of community activities after retiring from their respective jobs. David co-founded the college foundation, while they both served on its board. They also were active members of the ValleyCare Health System board. Barbara also served on the Livermore Chamber of Commerce board for many years.

In 2003, Barbara and David were the joint recipients of the Livermore Chamber of Commerce's Community Service Award.

Mertes had a passion for theatre and the arts. For about 20 years of her professional career, she wrote and directed many award-winning theatrical productions. She received three Northern California Emmy Awards.

She and David made frequent trips to San Francisco to attend the theatre, ballet and opera. She also enjoyed local theatre productions at Las Positas College and the Bankhead Theatre.

Her faith, formed as she grew up in Livemore and attended St. Michael Catholic School, was important to her throughout her life. Many days, she would attend morning Mass at St. Michael and then meet David and friends at Peet's downtown for coffee.

Barbara is survived by her siblings and their spouses; Charles "Pat" Fracisco and Phyllis of Pleasanton, Jeanne Packard and Darrell of Pleasanton, Martha Kopp and Laurence of Walnut Creek and Thomas Fracisco and Betty of Mission Viejo; and 14 nieces and nephews. Barbara was preceded in death by her husband David H. Mertes, Jr.

Photo Gallery
0 photos Upload a photo
Remembrances
0 entries Submit a remembrance
Memorial service
Saturday, September 20, 1 p.m. in the Barbara Fracisco Mertes Center for the Performing Arts, on the Las Positas campus. Doors will open at 12:30 p.m.
About this site     Contact us