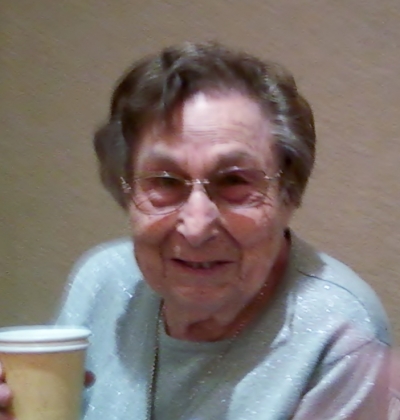 Bernice Art passed away peacefully from complications of surgery on June 5, 2015. She was a most remarkable woman. Wherever she went, she made friends. She knew everyone and everyone liked her.

She was born in Chicago in January, 1922 and lived through many bitterly cold winters and the Great Depression. She was college educated, a rarity in her time, and she worked many years as an administrative assistant for executives of insurance companies. She married Sam Art in San Antonio, Texas just before he was shipped out to Europe for WWII where he was an officer and bombadier.

She was a great lover of music - opera, classical, theater, and enjoyed attending performances while in Chicago and later on here in the Livermore area. She came to Livermore about a year after the death of her beloved husband in 1992. She was an active member of the Livermore Lioness Club, the Livermore Senior Center and Congregation Beth Emek. She was also a world traveler and had been to Europe, Australia, Thailand, the Panama Canal and other places too numerous to mention.

She is preceded in death by her parents, Sam and Celia Leland, her brothers Benn and Ray Leland, sister-in-law Zelda Leland and her son Robert Art. She is survived by her sister-in-law Nona Leland of Chicago, IL, son James Art of Pleasanton, daughter-in-laws Karen Art of Portland, OR and Ruth Van Art of Pleasanton, Grandchildren Cindy Marten of San Jose, Brian and Emily Art of Portland, OR. She is also survived by countless relatives and friends all over the United States who will miss her bright smile and gentle manner.

Photo Gallery
0 photos Upload a photo
Remembrances
0 entries Submit a remembrance
Memorial service
A memorial service will be held at 4 p.m. on Thursday, June 18 at Congregation Beth Emek, 3400 Nevada Ct, Pleasanton, CA 94566. Internment of her ashes will be in Chicago, IL in late June.
Make a donation
Memorial donations may be made to Livermore Lioness Club. Lioness main focus areas are women, children and family issues, in addition to helping the blind. Call 443-4543 for more information.
About this site     Contact us