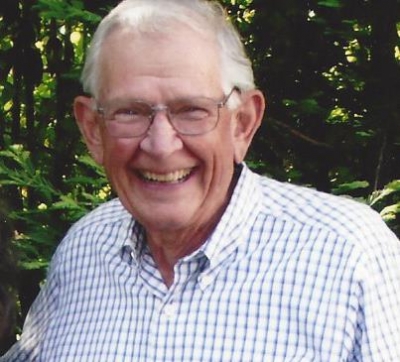 Carl Allen Holder Jr., a man of deep faith who loved working with his hands and getting things done, died July 30. He was 82. Carl lived out his Christian faith by serving others in a variety of volunteer roles as well as mentoring young people throughout his life. He did it all with a big smile that blessed all he encountered. He worked with his hands and restored cars for each of his three daughters that he gave them when they turned 16. He also liked building projects such as homes for Habitat for Humanity and projects around his church, Graceway of Pleasanton. Carl was born in Oklahoma City, Oklahoma. He attended Capital Hill High School and Oklahoma State University where he was in the Sigma Chi Fraternity and graduated with a Bachelor of Science degree. He married Jacquelyn Caudle in 1958 and they have three daughters. He is survived by his wife of 58 years, Jacque, and their three daughters: Karen Ann (Brooke Burton) of Highland Ranch, Colorado (children Kelby, Marley and Thatcher); Carla Kay (Jeff Land) of Diablo, California (children Jennifer and Jessica) and Kelly Sue (David Elkins) of Portland, Oregon (children Emily and Paige). While attending Oklahoma State, Carl participated in the Air Force ROTC program. Upon graduation Carl was commissioned as a captain in the United States Air Force where he piloted fighters. He also taught high school auto mechanics. He then joined Pan American World Airways as a flight engineer based out of San Francisco. The family moved to Pleasanton where all three daughters grew up. After his daughters were grown, he transferred to Berlin and captained Pan Am planes five years from there and saw the Berlin Wall come down. All three daughters visited them during the five years in Berlin. Carl finished his career flying for United Airlines as a flight engineer based in San Francisco. During Carl’s flying career, the family routinely vacationed in Hawaii. He also took each of his daughters on a special trip that he was piloting after they graduated from high school. The unique schedule of airline pilots (gone for a couple of weeks on trips and then home for two weeks) led to one of the Holder traditions—biscuits and gravy. When he was home, the daughters spread the word which meant he would bake cookie sheets of biscuits for all comers to their house. The family also enjoyed the Fourth of July for many years at the vacation cabin that he and Jacque built in Arnold at Blue Lake Springs in 1981. All 15 family members (daughters, their husbands and their kids) joined Carl and Jacque there for many great summer vacations. The grandkids all were taught to golf by Carl who simply said, “all the way back, all the way through, hold it.” It was also a favorite getaway site for church youth groups. He and Jacque were leaders of the “Challenge” high school group of Pleasanton Presbyterian church (now Graceway). Throughout his life, he loved connecting with younger people. He accompanied church youth on a number of summer mission trips to do service projects at an orphanage in Mexico. He told the girls on those trips, “Thou shall not whine; thou shall not snivel; just git her done.” In honor of their efforts, he collected nails from the Mexico site, drove one into a piece of wood and gave them to girls, inducting them into the “Order of the Nail.” He was a founding member of the church’s unique and world famous marching group “The Balloon Platoon.” Always the best entry into any parade! Carl also served as an elder in his church and as a member of the several building committees. In addition, he volunteered building homes with Habitat for Humanity, serving at Open Heart Kitchen and at Amador Valley High School as an assistant junior varsity basketball coach. Carl loved serving God, his family and others. His life exemplified this message of service John 3:16 “For God so loved the world that He gave His one and only Son that whosoever believes in Him shall not perish, but have everlasting LIFE.”