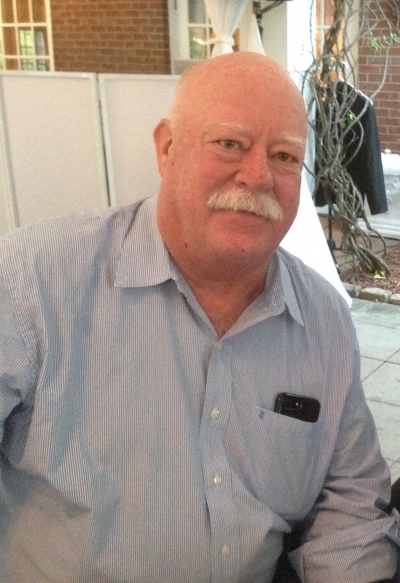 He was born on May 3, 1953, in Rumford, ME, to Marguerite and Charles Tiedemann Sr. Worried that people would call him “Carrot Top” due to his red hair, his Mom called him Rusty. His closest friends dubbed him “Red.” Both names stuck with him throughout his life. The family called many places in Maine, Connecticut, and Illinois home, eventually landing in New Canaan, CT.

Rusty graduated from New Canaan High School in 1971 where he was a cross country runner (going to multiple state championships) and a member of the ski team. While earning his Bachelor’s degree at the University of Vermont he maintained his passion for competitive running (ran a 4:44 mile!) and downhill skiing. UVM was also where Rusty would gain another nickname, “Mr. Mustang.” He bought a 1965 Ford hardtop Mustang the Summer after his freshman year only to roll it that Fall. What does one do when you roll your hardtop Mustang? Well, Rusty bought a 64.5 Mustang convertible (of course!) — his Dad was not pleased. After graduating from UVM, he moved to Colorado with some of his lifelong friends to become professional ski bums. In an effort to support his ski habit Rusty worked at Climax Mine in Leadville, CO, mining molybdenum. Realizing mining was not for him, he moved back to his hometown of New Canaan, CT, and started his sales career with a small company in Norwalk, Ct: Geos Corporation. It was in New Canaan where he met his wife Nancy Anne Miller; they married in 1979.

Rusty had a dream of becoming a geologist and in 1980, Rusty and Nancy moved back to Colorado where he attended the Colorado School of Mines. Though this dream was never fully realized, Rusty was never shy to share his knowledge on the subject with anyone who would listen. During this time, he also started his own company, ISYA (I’ll Sell You Anything). When Rusty was offered a job at North American Philips the couple moved to Grey, ME, where he was able to enjoy the winter sports he loved. In 1984 Rusty and Nancy decided that they had shoveled enough snow for a lifetime so they packed up to live out one of their biggest dreams — moving to California, where Rusty accepted a job with Despain and Associates. First stop was Newark, CA, where they started their family. Kristina Anne was born February 1985 and Charles Drew III followed soon after in July 1986. Needing a bigger house, the family of 4 moved to Pleasanton, CA, in 1987. Around this same time, Rusty began his long and successful sales career with Fujimi Corporation.

In Pleasanton, Rusty could often be seen running in the neighborhood Sports Park with his dogs, coaching soccer, taking joy rides in his cherished 64.5 Mustang (yes, the same convertible from college!), and presiding over the nightly neighborhood driveway parties where he was nominated “Mayor” of the hood. The family enjoyed their vacation home in Lake Tahoe for snow skiing and boating, weekend trips to local lakes to water ski, and traveling across the country to see family and friends.

Life brought Rusty to Portland, OR, in 2015 where he enjoyed using his sales expertise consulting for other companies, spending time with friends and family, as well as traveling.

Rusty’s greatest loves were his family and friends, and of course his faithful dogs. He is deeply missed by his beloved family: Nancy; children Kristina (Brady) Botkin, and Drew Tiedemann; brother Thomas (Meredith) Tiedemann; brother-in-law John Barnak; and extended family including nieces, nephews, aunts, uncles, cousins, and close friends near and far. Rusty was predeceased in death by family; dad Charles, mom Marguerite, and sister Brenda.

Donations in Rusty’s honor can be made to your local ASPCA, as this was his wish.

A private celebration of Rusty’s life will be held at a later date.