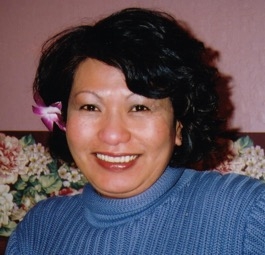 Corrie Serranno Simon , 63, passed away from colon cancer on Sunday, August 6, 2017 at U.C, San Diego Medical Ctr in La Jolla, CA. She was born on December 31, 1954 in Malabang ,Lanao Province Philippines. Corrie grew up in the Zamboanga City, Philippines before migrating to the United States in 1979. In 1978, she graduated from Silliman University in the Philippines, where she received a degree in Psychology. In 1979 immigrated to the United States so she could raise her daughter as a U.S. citizen. Corrie married Richard Simon in 1995 in Pleasanton, Ca. and were happily married for 22 years. They both had been previously married which brought together their three children as one family. She worked for over nine years at Lam Research Corp in Fremont CA as business analyst in marketing, a core acquisitions coordinator, and finally as a contractor. Corrie enjoyed a good cry while reading/watching emotional books/movies, going to concerts, cooking for friends and family, gardening orchids, and sewing and crocheting blankets for pets in the family. Over the years, she collected and was gifted many turtle figurines, which she showcased in large curio cabinet. Her favorite spot to vacation was in Hawaii with her spouse. They also liked to explore the state of California, taking the occasional weekend day trip. Over the years, Corrie got into Sunday football, understanding some of the main rules, but confused by others. She was a lover of all animals, especially her pet dachshunds Casey & Willis and her real life turtle collection of aquatic and land turtles. Her family and friends will remember her as a stubborn, funny, loving woman who would always help anyone in need. Corrie was preceded in death by her parents Bernandino and Pura Serrano and her brother Poldo Amistoso. Corrie is survived by her spouse Richard Simon of Fallbrook, CA; her daughter Sarah Pajarito of Oakland CA; her son Stephen Simon of Las Vegas, NV; and her son Philip Simon of San Jose, CA. She has three brothers Carlos Amistoso, Robert Torres Sr, and Ted Serrano. She had 5 grand children, 2 great-grandchildren and her loving nieces & nephews.

Photo Gallery
0 photos Upload a photo
Remembrances
0 entries Submit a remembrance
Memorial service
A memorial service will be held at St. Mary's of the Immaculate Conception church on September 30, 2017 at 10:30am located at 219 Bean Avenue, Los Gatos, CA 95030. A reception will be immediately follow the mass service.
Make a donation
American Cancer Society - Breast Cancer
About this site     Contact us