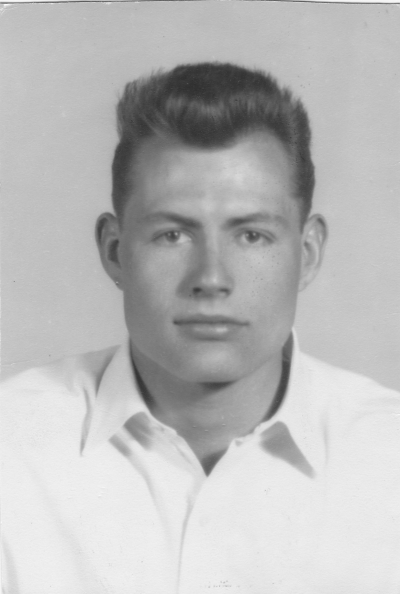 Donald Muentz passed away after a long battle with Alzheimer's on July 1, 2014. He was born in Cleveland, Ohio, on Jan. 4, 1927. His parents were German immigrants and lived in a German community. After graduating from high school, he was drafted in the army and served a year and was honorably discharged in January 1946. He was a World War 11 veteran. After the army he worked in the steel mills and was a sailor on the iron ore boats in the Great Lakes. He got his college degree from Fenn College which allowed him to take every other quarter off to work.

His parents moved to California and he followed them and got his teaching credential in Southern California. His first teaching job was in Fairfield, CA. He was hired by Livermore High School in 1959 to teach English and to coach wrestling. He was known for his muscle development. Don lifted weights in his garage and worked out regularly. Socially, he was quiet and reserved. His style was brusque and abrupt. His friends were other members of the English department.

In 1966, he met Marjorie Heath, another teacher at Livermore High School, and they got married and had two sons, Aaron and Mark. Marriage and family changed his style. He gave up weight lifting and went into Yoga and became vegetarian, and he softened his approach to other people. He had a high performance expectation from his students. Many of his students won writing competitions. Reading was one his favorite activities and he read to his sons, and they both became avid readers and went to college - Aaron at Cal Poly in San Luis Obispo and Mark at UC Davis. His other great interest was backpacking and hiking in the high Sierras. He took his sons with him.

He and his wife separated in 1978 but lived near each other and shared parental duties and had holidays together. When he retired in 1991, he took care of his mother who suffered from dementia. After she died, he pursued his interest in the mountains and backpacking and retired to Grass Valley in 1998. He donated much money to environmental causes and enjoyed organic gardening. He was physically active until 2008 when dementia claimed his mind.

Donald was preceded in death by his parents, Fred and Lydia Muentz, and his brother Gilbert Muentz. He is survived by his sons, Aaron (Keri) and Mark, and grandchildren Lydia and Henry, two nieces Patty Troupe and Susan Frazier and cousins.

Photo Gallery
0 photos Upload a photo
Remembrances
0 entries Submit a remembrance
Memorial service
A private memorial service will be held for family and close friends.
Make a donation
Memorial donations can be sent to any organization supporting environmental causes.
About this site     Contact us