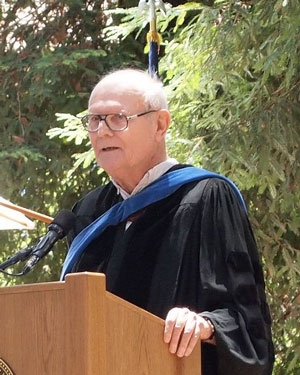 Edwin Bridges, 85, passed away of heart failure on March 7, 2019 in his home on the Stanford campus with his loving family present.

After graduating from the University of Missouri and marrying his college sweetheart, Marjorie Pollock of Baytown, Texas, 20-year-old Bridges worked as a high school teacher, and by age 26 was principal of a high school in Griffith, IN.

Bridges earned Masters and PhD degrees at the University of Chicago before beginning an academic career that included professorships at Washington U, U of Chicago, UC-Santa Barbara, and Stanford University. He was noted for his books and articles on low-performing teachers and a teaching method called Problem-Based Learning.

Bridges is survived by his wife Marjorie, sons Brian of Stanford and Bruce Bridges (Cynthia Gaertner) of Los Altos, daughter Rebecca Bridges Altman (Rick) of Pleasanton, granddaughters Erica and Jamie Altman, grandsons Anson and Nolan Bridges, and dozens of former students who were an important part of his life. He was preceded in death by his oldest son Richard Bridges in 2016.

Celebration of Life will be held Friday, May 10 at 2 p.m. at Menlo Church, 950 Santa Cruz Avenue, Menlo Park. In lieu of flowers, donations may be made to Bay Area Funeral Consumers Association, Santa Clara County NAMI, or American Heart Association.