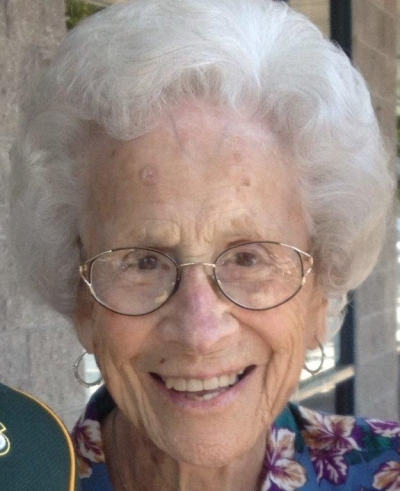 Edythe L. Shewfelt (?Nana?) was born in Winnipeg, Manitoba, Canada on July 31, 1914. Her family relocated to Vancouver, British Columbia where she married Edgar Ronald ?Ron? Shewfelt on Oct. 26, 1938. They began their married life as immigrants to the United States, moving to Berkeley, California where Ron worked as a pharmacist. They were extremely proud to become American citizens and they were grateful for the opportunity to pursue the American dream. Together they opened their own pharmacy and Edythe helped run the store, including working the soda fountain. Later in life they often recounted that all the money they had in the world was in the till the day they opened.

Edythe and Ron raised their two children, Muriel and Larry, in Oakland. They lived there until Ron went to work for the Northern California Pharmaceutical Association, taking them to Sacramento in 1972. Ron?s work with the NCPA gave them the opportunity to travel the world. Ron and Edythe were married for 53 years before he passed away in 1991. Edythe continued to reside in Sacramento until 2006 when she moved to Pleasanton to be nearer to her extended family.

Edythe was also preceded in death by her son Larry. She is survived by her daughter and son-in-law, Muriel and Frank Capilla, her three grandchildren and their spouses, and her eight great grandchildren. She was proud of her great grandkids and was delighted when they would come to visit and she could introduce them to everyone around. She enjoyed attending their sporting events and she loved to be surrounded by all of her family on holidays and birthdays. She enjoyed lunches out, playing bunco and spending time with her friends at Parkview Retirement Community. She especially adored her outings with her daughter Muriel. She will be remembered for her kindness, her warm smile, her quick wit and her beautiful spirit. She loved to chat with everyone she met, striking up conversations and encouraging all those around her. She was generous and loving and she touched the lives of many, many people in her 99 years. The family is comforted by their wonderful memories and the knowledge that Nana and Papa spent their 75th wedding anniversary dancing together again and celebrating the deep love that they shared and modeled for all of their family.

Services will be private.

Photo Gallery
0 photos Upload a photo
Remembrances
1 entry Submit a remembrance
From Pat Markle
Nov. 5, 2013
Edythe was always a pleasure to talk to when I would visit my mom, Kay, at the Parkview. Edythe was a great friend and companion to my mom. She would often make sure that my mom was in a good place and would comfort her and keep her positive. Edyt...
Read more
Video
Upload a video