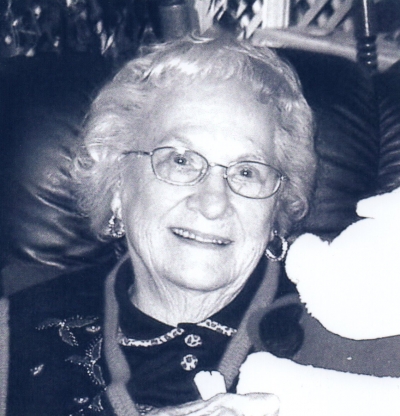 Elenora Bienek Monette, affectionately call "Ella," resided in Pleasanton for the past 44 years and passed away peacefully on Sunday, August 25, 2013. Born October 8, 1921, in Polonia, Texas, she was one of nine children born to Robert Bienek and Ottilie Schultze Bienek, also of Texas. The family lived in the rural Black Hill Community in Texas, where Ella, sometimes called "Ellie," grew up on her parents' large working farm with her five brothers and three sisters. Her father was multilingual and musically gifted playing several musical instruments, as were all of her brothers. On holiday with her sister, she met Reynolds "Ray" Monette in Galveston, Texas. Ray won Ella's heart and they were married June 21, 1941, in Houston. They settled in California. Ray and Ella were together for life's events. They had one daughter and a grandson. When war came, Ray dutifully enlisted in the Merchant Marines in 1941. Ella kept the home fires burning until he came home and their daughter was born. They made their life together in the Bay Area, mostly in San Leandro, until moving to Pleasanton in 1969. Ella cherished every visit "home" to Texas, but her life was in the Bay Area and Pleasanton, and she was overjoyed when someone from "down home" showed up at the door and, of course, everyone was welcome. Ella retired a few years ahead of Ray. Ray had become a painting contractor in 1943 and later was employed by the Port of Oakland before joining Ella in retirement in 1977. Together they enjoyed traveling, mostly with family, making six trips to Hawaii and other destinations both in and out of the country. They took up folk dancing in the fifties and their old Whirlitzer Jukebox held a fair share of folk dancing records. The country girl in Ella loved working in the yard, especially in her vegetable garden. She and Ray went fishing frequently at Del Valle and Shadow Cliffs. They enjoyed craw fishing too. One of their special craw fish spots was in Niles Canyon. When it came to fishing, they were both teammates and competitors. Their time together was precious to them, all the more when they could include their daughter Jan and grandson Daniel. Ella, when widowed in 1995, joined the Pleasanton Senior Center and continued to travel, making many friends from the Center and staying in touch with them. Her parents and eight siblings preceded her in death. She had numerous brothers-in-law and sisters-in-law, nephews, nieces, and cousins in Texas and California. She is survived by her daughter Jan Tobias of Pleasanton, grandson Dan Tobias, and his wife Laurie of Livermore. A celebration of her life will be private. Gifts in her memory can be made to St. Augustine Church in Pleasanton or to your favorite charity.