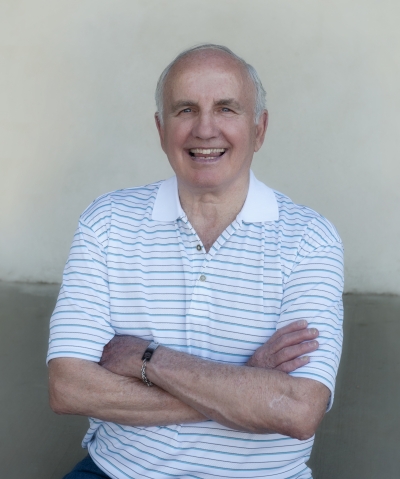 Eugene Wilfred Gadd, age 80, went to be with the Lord on September 22, 2012. Eugene was born to Wilfred and Ellen Gadd on December 15, 1931 at Trinity Lutheran Hospital in Kansas City, MO. Gene is survived by his adoring wife Mitzie, his seven children: Mike Gadd (Anne), Cathy Perotti (John), Patty Santin, Rebecca Walker (Jon), Jeff Gadd (Jennifer), Kevin Gadd (E'Lese), Brett Gadd (Ashlee), and his ten grandchildren: Rachael, Emily, Eric, Cameron, Brian, Kelsey, Austin, Jason, Jessica, and Everett. He was the oldest of three boys; he leaves brother Bob behind (Overland Park, KS), and was preceded in death by brother Dick. Gene was also cared for by in-laws Bob and Anne Turner. An accomplished Eagle Scout, Gene served in the Navy during the Korean War from 1951-1955 as a plane director on the USS Philippine Sea (CVA-47). While on the ship, Gene tried out for basketball and baseball, and was selected for both teams. He was also very proud to be chosen for the 1954 San Diego Naval Air Station ?Skyraiders? basketball team. After his honorable discharge, he continued playing basketball and baseball for the University of Missouri Kansas City, where he graduated with a business degree in 1961. Gene was hired by Burroughs Wellcome as a Pharmaceutical Sales Representative, where he worked his way up to District Sales Manager of the Bay Area and Hawaii in 1969. His district became the number one in sales for the pharmaceutical division in the entire country. He retired in 1994. Known as "Coach", Gene was passionate about working with young men and women. Over the span of forty years, he coached more than eighty different teams in basketball, baseball, soccer, and football, including several all-star teams. Gene served on the Valley Christian School Board and became President of the board in 1990. Gene will always be remembered as a loving husband, hard worker, loyal friend, and an on-the-floor type of dad. When Gene spoke, people listened. He was confident, likable, protective of his family, and above all else, a faithful man of God. Gene always told his family ?If anything ever happens to me, just know that I?ve had a good life.? Gene leaves behind many friends and a huge family, but he had a heart big enough to hold all of us.

Memorial service
A memorial service will be held on Saturday, September 29, 2012 at 1:00pm at Valley Christian Church, 7500 Inspiration Drive, Dublin, CA.
Make a donation
In lieu of flowers, Gene?s family asks friends to shoot a couple of free throws in his memory, and/or make a donation to the Valley Christian Athletic Department. http://www.vcsathletics.com/contact_us.html
About this site     Contact us