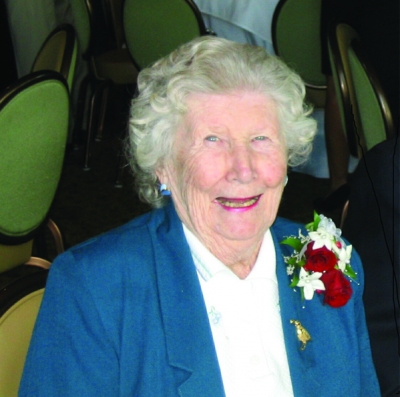 Fannie Lambert Annis passed away on January 1, 2013, after suffering a stroke on December 31, 2012. We knew she would make it to New Year?s Day! At the time of her death, Fannie had been living in Livermore for 1 ½ years after residing in the same house in Pleasanton since 1950. Fannie was born Fannie Arnold Lambert in Superior, WI, on May 11, 1920. Shortly thereafter the family moved to Duluth, MN, where Fannie attended elementary schools, East Junior High School and Central High School. Fannie then graduated from Duluth State Teacher?s College (now the University of Minnesota at Duluth ? UMD) in 1942 with a bachelor?s degree in education. Fannie spent two years teaching in upper Michigan, one year teaching in San Francisco, CA (during World War II), one year teaching in Niles, CA and then 19 years teaching at Alisal Elementary School in the Pleasanton School District. Fannie always taught third grade, ostensibly because ?the math was too difficult in fourth grade.? She loved being a teacher and was always able to look at the humorous side of events in the classroom. Fannie retired in 1977 to be able to travel the world. In March of 1939, Fannie Lambert met Warren Annis?the love of her life?as they were playing ping pong against each other at the recreation center at Duluth State Teacher?s College. That same night they went to a dance and, as they say, the rest is history. Ultimately, Warren graduated from Duluth State Teacher?s College and on March 6, 1944, left for the Naval Officer?s Training School at Columbia University in New York. Warren graduated from Officer Training School as a ?90 Day Wonder? Ensign on June 29, 1944, took a train to Duluth, MN, and Fannie and Warren were married on July 3, 1944. Warren was then sent to the South Pacific battlefront. Fannie followed him by taking the train to California and working miscellaneous retail jobs and then teaching in San Francisco. Fannie was very proud of hopping on a train and traveling to California, by herself, to ?follow her man.? After World War II, Fannie and Warren moved to Pleasanton, CA in 1948 and remained there for a total of 61 years. During that time Fannie was a teacher, loved gardening (her roses were adored by passersby on Vineyard Ave. for many years), enjoyed beating Warren at cribbage and her chocolate chip cookies were ?world? renown. Fannie is survived by her loving husband of 68+ years, Warren, her children, Larry (Carolyn) of Pleasanton, CA and Jim (Gini) of Reno, NV, her grandsons, Greg Annis of Oakland, CA, Keith Annis of Lima, Peru, Kevin (Megan) Annis of Reno, NV, Brian Annis of Burbank, CA, and her great grandchildren, Connor and Hailey Annis, and her older sister, Joan Mullin of Zion, Illinois. Fannie was predeceased by her father, Vincent Sylvester Lambert, her mother, Ida Mae Burgess Lambert and her sister, Katherine Farnam. There will be a genuine Celebration of Life for Fannie on Saturday, February 2, 2013 at the Pleasanton Senior Center, 5353 Sunol Boulevard, Pleasanton CA, at 2:00PM. One of Fannie?s requests at her celebration was the playing of ?The Beer Barrel Polka.? That request will be honored and will be in addition to other heartfelt and humorous moments at her celebration. We are hopeful that many of the students that she taught in Pleasanton will be able to attend this celebration. Fannie asked that in lieu of flowers, donations be made to: Children, Incorporated; c/o Appalachian Children?s Fund; P.O. Box 5381; Richmond, VA 23200-0381