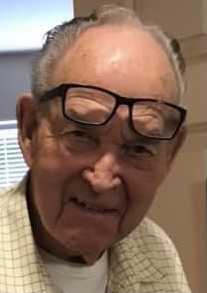 HR passed away after a brief illness. He was born in Coleman Texas and moved to Pleasanton with his family in the 40's. He graduated from Amador in 1949 and served in the Army before graduating from San Jose State. He then received his teaching credential from Cal State Hayward. He started his real estate business in 1969 and remained an active agent until his retirement. HR was a ballroom dancer and could play just about any instrument. He is survived by his sons Stephen (Bonnie) and Scott (Julie) and four grandchildren. He is also survived by his sister, Mary Beth Rich, and his brother Cecil Don Shamblin along with his two nephews and their families. He will be remembered as a loving father and grandfather as well as quite a character and man-about-town. The family would like to thank the staff at Abigail's Guest House for the care they gave HR during the last eighteen months. A graveside service for family was held. In lieu of flowers the family asks donations in HR's name to be made to Hope Hospice in Dublin.

Photo Gallery
0 photos Upload a photo
Remembrances
0 entries Submit a remembrance
Make a donation
hopehospice.com
About this site     Contact us