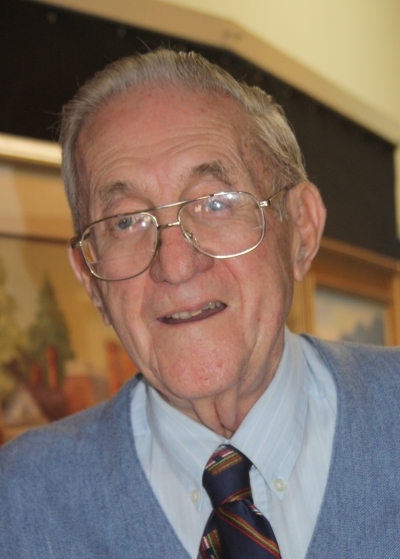 Pleasanton has lost one of its most involved citizens with the death of Jack Dove on Wednesday, April 24. Jack was born in Saint Clair, Pennsylvania (near Philadelphia) to parents Chester Arthur Dove and Anne (Reese) Dove. His education was interrupted by military service. While getting pneumonia would be very bad news for most people, Jack considered himself lucky. It was as a young soldier recovering from his illness that he met Second Lieutenant Polly Klymer Moyer, who was in the Army Nurse Corps at Aberdeen Proving Ground in Maryland. She and Jack were wed on May 4, 1946 ? a marriage that lasted 65 years, until Polly?s death August 1, 2011. Jack had been in charge of the station hospital laboratory (1943-46).

After Jack?s discharge from the service, he and Polly moved to Bethlehem, Pennsylvania, where Jack completed his degree in chemical engineering at Lehigh University. One month after his graduation, their daughter Suzanne was born.

The Dove family had many ?nests,? moving often due to Jack?s career as a corporate executive in paint and chemicals ? first in Stamford, Connecticut, where son Jay was born. Jack was called back to military duty as an Army first lieutenant for the Korean War (1951-52). The Dove?s home was in Falls Church, Virginia, while Jack worked for the Armed Forces Security Agency. Their son Bill was born there.

The family lived in northeast England (Newcastle-Upon-Tyne) for two adventurous years, where Jack was in charge of divisions in 18 different countries. They then returned to California. The Doves lived in Alamo before moving to Pleasanton in 1986, first to Vineyard Villa, then, in 2000, to Ridgeview Commons, their final home. Jack and his wife loved raising orchids and birds, and many of their homes included greenhouses and aviaries. Their children remember many family trips to zoos in whatever state or country they were in (and after college, daughter Suzanne became a zookeeper in Boston for a time).

For many years, Jack and his friend Roger McLain were unofficial town greeters, based in the small Lions Club Ticket Office & Visitors Center that was then located at the southern edge of Lions Wayside Park. Jack gave directions to visitors, handed out bus schedules, distributed fliers for community events, and sold advance tickets to the Alameda County Fair and other community events. He also held informal meetings with many community leaders. Jack would watch over the colorful patchwork of blankets that would be set out in the park 12 hours in advance of the Friday concerts.

Because of that role he created for himself, Jack became involved in "Celebrating Freedom and its Evolution since the Revolution" ? an all-volunteer Fourth of July event now in its fifteenth year at Lions Wayside Park. Until recently, Jack was part of the small planning team that met monthly at Coffee Company.

A spin-off from the Fourth of July was the annual Ed Kinney Community Patriot Award, named in honor of the event?s first master of ceremonies. Jack was the first to receive this award, in 2005. The honor was bestowed upon Jack for the many ways in which he helped make Pleasanton a great place to live. Jack was an advocate for senior citizens, connecting many neighbors to Senior Support Services and working on affordable housing. He served on the city?s planning commission and the 1996 General Plan Review (circulation committee). Jack served on the Alameda County Commission on Aging; Bay Area Community Services (board member); East Bay Regional Park District (park advisory committee); Herrick Hospital, Berkeley (board of directors); Boy Scouts of America ? Mount Diablo Council (board of directors); and EUB Church of Itasca, Illinois (lay leader). Jack helped pass a school bond measure in the late 1990?s, and he continued to be involved in Pleasanton Unified School District as one of the Honorary Ambassadors that meet monthly with Superintendent Parvin Ahmadi.

The role models for community service and life values were Jack?s grandfathers. John W. Reese was a blacksmith who worked on the Panama Canal. Later in life he was the first head of a local electric company, and then superintendent of a prison, before being elected to county offices. Thomas Dove was a Welsh immigrant who moved to the anthracite coal region of Pennsylvania, where he learned to value how labor unions could help miners and other workers. That grandfather later became head of his own dynamite company (and perhaps that is why Jack became known for launching rockets over campus buildings when he was in college!)

Jack was a strong supporter of the ACE commuter train, even coming out of retirement to serve as the station master for a time at the county fairgrounds, which meant getting up at 4 a.m.! As Jack?s mobility decreased in recent years, he became a proud user of and advocate for public transportation in Pleasanton and the Tri-Valley.

One of Jack?s final endeavors was Project YO-YO, which stands for "You?re On Your Own." He spoke to many groups about how, in the event of a major earthquake, we likely would have to fend for ourselves for the first 72 hours before we could expect help from first responders. He urged households to have on hand the water, food, and first-aid supplies that would sustain them for that period of time.

Besides his parents and his wife, Jack was pre-deceased by his son John Thomas Dove and his only sibling, Thomas. He is survived by his daughter Suzanne of Berkeley; sons Jay of San Diego and Bill of Carlsbad, CA; and grandsons Christopher Altieri-Dove of Berkeley and Cameron Dove of Carlsbad, plus many nieces and nephews.

Jack was a decent man. He was bright, frequently a maverick, an often far-seeing planner, and always interested in many projects.

Photo Gallery
0 photos Upload a photo
Remembrances
1 entry Submit a remembrance
From Jorja Baracchi
April 12, 2018
We can install different programs in our computers. By bestessay reviews services we can find CDs of some programs to install easily. We can use CDs to transfer our important data. We can...
Read more
Memorial service
A memorial service will be held on May 25 ? what would have been his 90th birthday ? at 2 p.m. at Lynnewood Methodist Church, 4444 Black Avenue.
Make a donation
The family suggests, in lieu of flowers, contributions in Jack?s name be made to the Lynnewood Methodist Church Music Fund 4444 Black Avenue, Pleasanton, CA, 94566 or the Pleasanton Partnerships in Education (PPIE) Fund, online at http://ppie.org or 333 Division Street, Pleasanton, CA 94566.
About this site     Contact us