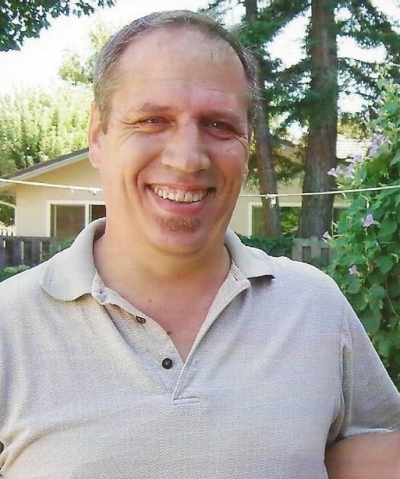 James Clyde Mayo, a man of deep Christian faith, died after suffering a stroke at the age of 57. While hospitalized after the stroke, the hospital chaplain reported that he kept repeating “Jim Mayo, man of God.” On other visits when she would read scripture, he would routinely finish the verse from memory. He was a graduate of Bethany Bible College in Santa Cruz with a Biblical studies major. Born in Oakland, Jim moved with his family to Pleasanton when he was nine. He attended Pleasanton schools, graduating from Amador Valley High in 1977. Professionally, he was the sales manager for Mayo Radiator and then handled outside sales for other businesses. He was a huge Giants fan and loved the mountains. He is survived by his children, Hallie Mayo and Kevin Mayo; his parents Dorothy and George Mayo; his sisters, Lou Ann Perry and Christina (Brian) Anderson; his brother, Edward (Tina) Mayo, many nieces and nephews and great nieces and a great nephew. He was predeceased by his wife, Cindy Mayo, and his sister, Laura Mayo Wigley.

Photo Gallery
0 photos Upload a photo
Remembrances
1 entry Submit a remembrance
From Kevin Creighton
Jan. 13, 2017
Loved Jim and his bride at Bethany in the early 80's. Cindy charmed and Jim was a true man of God. Not the preaching kind, he was the living kind
Memorial service
2 p.m., Sunday, Jan. 15, 2017, Lynnewood United Methodist Church, 4444 Black Avenue, Pleasanton
Make a donation
GraceWay Church, PO Box 5550, Pleasanton, 94566
About this site     Contact us