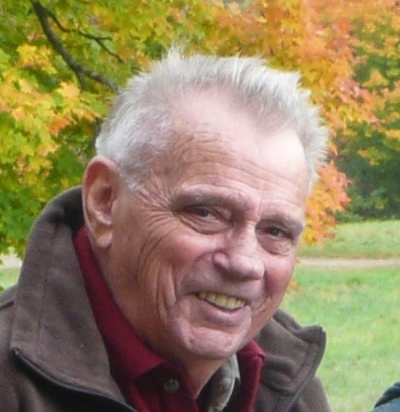 James Campana, 86, of Sonora, CA died peacefully on Friday, April 26. He was born to the late Arthur and Katherine Campana, September 3, 1926, San Francisco, CA. Jim attended Balboa High School and was written up in the SF Chronicle as "the Tommy Dorsey of Balboa High." He received a BA and MA in Music in 1956 from San Francisco State University. He was married 59 years to his late wife Rosemary, and they lived in Pleasanton, CA 37 years before retiring to Sonora, CA in 1996. Jim was hired in 1959 as the Band Director at Amador, and taught until he retired in 1979. Mr. C. was passionate about making a difference in his students? lives. In 1975 he founded the Amador Valley Jazz Festival and after his retirement, it was renamed the Campana Jazz Festival, which he attended faithfully every year. Jim was an active member of St. Patrick?s Church of Sonora, and SIRS. He traveled with his wife, family, and friends throughout his retirement. He enjoyed playing golf and dining at Caesar?s Restaurant of San Francisco with family and friends. Jim is survived by four children: Lisa Garon, of Pleasanton, Terri Campana, of Palenville, NY, Tina Wilbur, of Sonora, Paul Campana, of Fremont, and five grandchildren. A Rosary will be held at 7 p.m. May 16th at Graham-Hitch Funeral Home, followed by a Funeral Mass, May 17th at 10 a.m., St. Augustine?s Church in Pleasanton. A Memorial Reception will follow the mass at the Pleasanton Hotel, (Handles Gastropub).

Photo Gallery
0 photos Upload a photo
Remembrances
9 entries Submit a remembrance
From Rob Thomas
Sept. 15, 2013
High school band can be a rough experience, but not with Mr. C. He instilled passion without pain. He didn't demand quality, he achieved it. As a kid who changed uniforms at halftime, I find that I have more nostalgia for the band than sports. We wer...
Read more
Video
Upload a video