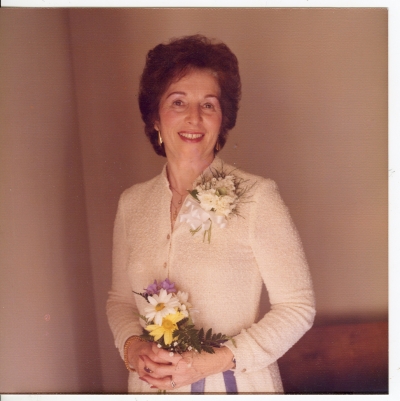 At the age of 90, Jean Elsberry Bountis passed into the hands of God on Friday, June 27, 2014. She passed away in the presence of family at her home in Pleasanton where she had resided since 1966. Jean was born on November 15, 1923 to Forest and Bessie Elsberry on a country farm in Paris, IL. Jean always had a love for music and started playing piano at an early age and faithfully played at Clay?s Prairie Church.

After graduating from high school in Paris she continued her education at Stephens College in Columbus, Missouri. Two years later she transferred to Northwestern University in Evanston, Illinois. Continuing her passion for music, she learned to play concert Harp and graduated with a BS in Speech and Eluquotion in 1945. During her university years she participated in the war endeavors by chairing the Victory Garden effort in her local community and by selling War Stamps at Northwestern. Her university experience gave her the desire to spread her wings and travel the world; a passion that would always be a part of her. She completed her Flight Attendant training in Washington DC and flew with Capitol Airlines, TWA and Transocean Airlines from 1946-1949. Jean was the first female spokeswoman for Capitol airline. While in DC, Jean also worked part time as a Detective. As a flight attendant, some of her most memorable trips were flying WWII Displaced Persons (DPs) from all over Europe to the United States on a DC-3. While visiting the Vatican she met with Pope Pius XII and he blessed a rosary, which was one of her most cherished possessions. In 1950, Jean married a dashing young Airline Captain, Apostolis Bountis, who had flown the China Burma India hump. With an educational background in speech, Jean worked in television doing commercials for Necchi Sewing machine company and later as a radio disc jockey for KHYD. Her husband Nick and their five daughters moved to Pleasanton in 1966.

Jean was a wonderfully committed wife and mother but also continued to remain community minded. She was one of the founding members of the Lynnewood United Methodist Church on Black Avenue, press secretary for the San Ramon Valley RWF, and a representative for Heifer International, personally escorting 340 goats to Seoul, Korea.

Jean is survived by her five daughters; Sandra Bountis of Reno, Jane Bountis-Berthet of Penn Valley, Helen Bountis of Santa Rosa, Betty Anderson of San Juan Capistrano, and Linda Bountis of Pleasanton; along with 6 grandchildren and 5 great grandchildren.

Memorial service
Memorial Services will be held on Saturday, July 5 at Lynnewood United Methodist Chuch at 4444 Black Avenue, Pleasanton. Viewing at 10:45-11:15 a.m., Memorial Service 11:30 a.m.-12:30 p.m. with luncheon reception to follow.
Make a donation
In lieu of flowers, help end world hunger by making a charitable donation to Heifer International in Jean's memory. www.heifer.org
About this site     Contact us